3 Ways Zynga Is Killing It in Mobile Games

Zynga (NASDAQ:ZNGA) delivered another round of robust operating results when it reported second-quarter earnings earlier this month. Revenue and bookings surged 47% and 38% year over year, respectively. Steady releases of new features and content across its games continued to fuel engagement.

These impressive numbers come on the tails of a strong year in 2019 in which bookings increased 61%. Here are three ways Zynga continues to kill it in mobile games. 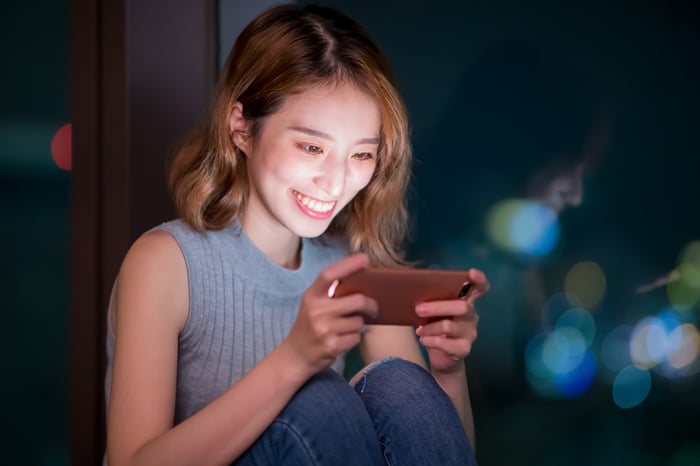 Just about all video game companies these days have turned their business into a live service, where game makers monetize their franchises with an ongoing stream of content drops that keeps players engaged for longer periods. While Zynga’s games are free-to-play, the company generated $455 million in bookings last quarter from paying users. That’s an increase of 47% year over year.

Operating a successful live service business is crucial to Zynga’s growth. Advertising revenue has fallen to just 12% of total bookings, so Zynga must be sharp with its game-development efforts to encourage players to spend money on new features.

All of Zynga’s biggest games had strong quarters, with some achieving record results, including Merge Dragons! and Words With Friends. New Battle Pass features in Empires & Puzzles, Merge Magic!, and Hit It Rich! have been “well received by players and are proving to be positive drivers of engagement and monetization,” as CEO Frank Gibeau said on the conference call.

As mobile technology and new experiences draw in more players, Zynga has started to widen its reach across the mobile market. “Mobile is continuously evolving, and we are investing in new platforms, markets, and technologies to increase our total addressable market and drive further growth,” Gibeau said during the call.

Zynga recently released a second title — Bumped Out — on Snap‘s games platform, where more than 100 million Snapchat users have played games since the platform launched in April 2019. Zynga also launched a Word With Friends Word Pop game on Amazon Alexa.

These new experiences are not contributing much revenue right now, but releasing content on other platforms is a key part of Zynga’s long-term growth strategy.

“While our investments in these and other initiatives are in the early stages, we believe they have the potential to increase our growth over the long term,” Gibeau said.

3. Stocking the game library with acquisitions

Buying your way to growth via acquisitions can sometimes be problematic, but Zynga has been very effective with this strategy. Zynga does acquisitions while keeping its balance sheet healthy. Plus, acquiring other top game studios enhances Zynga’s ability to grow live services with more franchises and add more game-development talent to its ranks.

Zynga has been very busy with deal-making lately. It acquired 80% of Small Giant in 2019 for $717.9 million. Just recently, it completed the acquisition of Peak for $1.85 billion, and earlier this month, Zynga announced it is buying 80% of Rollic for $168 million.

“We continue to see opportunities to acquire talented teams and franchises to further accelerate our growth,” Gibeau said. “The talent base for mobile gaming is global, and the mobile platform is vast and constantly evolving with new innovations emerging every year.”

With each new acquisition, Zynga is also deepening its game pipeline, which just keeps the gravy train going, providing more cash from live service sales to reinvest in the business or acquire another top studio.

All in all, Zynga continues to show why it’s worthy of investors’ attention in the interactive entertainment industry. The stock price has more than doubled over the last three years, and more strong quarters like we’ve seen this year will fuel further gains.

The Last of Us 2 Multiplayer Will Be Worth the Wait, Says Neil Druckmann

The Nintendo Switch ‘Animal Crossing: New Horizons’ Edition Is Back on Sale

Xbox All Access: How to buy the Xbox console for as little as $25 a month with zero money down

The Last of Us 2 Multiplayer Will Be Worth the Wait, Says Neil Druckmann

The Nintendo Switch ‘Animal Crossing: New Horizons’ Edition Is Back on Sale

Xbox All Access: How to buy the Xbox console for as little as $25 a month with zero money down