This speaks well of Jimmy Garoppolo and doesn’t reflect well of Sunday’s foe: The QB was better on one leg against the Jets than he was in his able-bodied effort versus the Cardinals in Week 1. Garoppolo had as many TD passes (two) as incompletions in the first half before exiting with his injured ankle. As for his supporting cast, tight end Jordan Reed did a fair George Kittle impression, running back Raheem Mostert glided for an 80-yard TD and backup Jerick McKinnon didn’t look much slower while averaging 25.7 yards on three rushes. They had 182 rushing yards and averaged 6.3 yards per carry, numbers that could have beenbigger if a holding penalty didn’t negate a 67-yard TD run by Mostert.

No Richard Sherman, no Dee Ford, no Nick Bosa for the final 51 minutes and … no problem. At least not against the Jets, with their green QB Sam Darnold, aged running back Frank Gore and who’s-he wide receivers. (Braxton Berrios?) The 49ers allowed just two field goals and 196 yards in the first 57 minutes, and linebacker Fred Warner (12 tackles) helped set the tone with a 4th-and-1 stop in the second quarter when the 49ers had a 14-3 lead. A potential problem without Bosa: They had just one sack and six QB hits.

This is what the 49ers had in mind when they spent a fourth-round pick on Mitch Wishnowky. The punter had a 44.8 net average on four kicks, dropped punts at the 10- and 15-yard lines, and his lone touchback probably should have been downed at the 1. The former rugby player also had a tackle on a kickoff return. Robbie Gould doinked in his lone field-goal attempt, a 46-yarder.

Kyle Shanahan stuck with a buttoned-up game plan, sort of a no-duh decision, considering he didn’t have his best tight end and wide receiver and his QB could barely move four minutes into the game. And Shanahan, the collaborator with GM John Lynch, deserves credit for a deep roster that could have its B team wipe out an NFL bottom feeder. 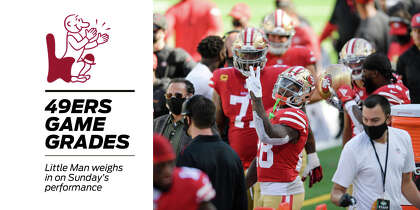 The 49ers deserve credit for weathering countless injuries to front-line players and cruising to a road win nearly 3,000 miles from home with a 10 a.m. West Coast start. The tests will become far more difficult, but perhaps not immediately. Next up: the New York Giants.