Why do we play games? Exploration would seem to be the watchword, the catalyst for every element of the most diverse and interesting form of entertainment there is. It doesn’t matter what you’re exploring; all that matters is that it’s happening. In the most traditional sense, you’re exploring an unfamiliar, possibly mystical locale. On a less narrative level, you’re exploring your own ability, your skill. You’re exploring the tactics of your opponent. Exploring the art funnelled into a game by its talented creators. That’s what gaming is; exploration.

Forgive the pretentious first paragraph, there. Some games inspire such reflection on what this (alleged) art form is all about. What we get out of gaming, fundamentally, regardless of the myriad genres, platforms, styles, budgets, controls. Whatever that elusive, universal experience is, A Short Hike has it. In spades.

You play as Claire, a little bird (or birb, to use the parlance of the internet) on holiday in a place called Hawk Peak. In a quest to find a mobile phone signal, she must reach higher ground. So you do. But just like life, there are plenty of distractions on the way. Hawk Peak is a small, contained, compact place but it’s rich with things to do, all of which are refreshingly organic in their presentation. 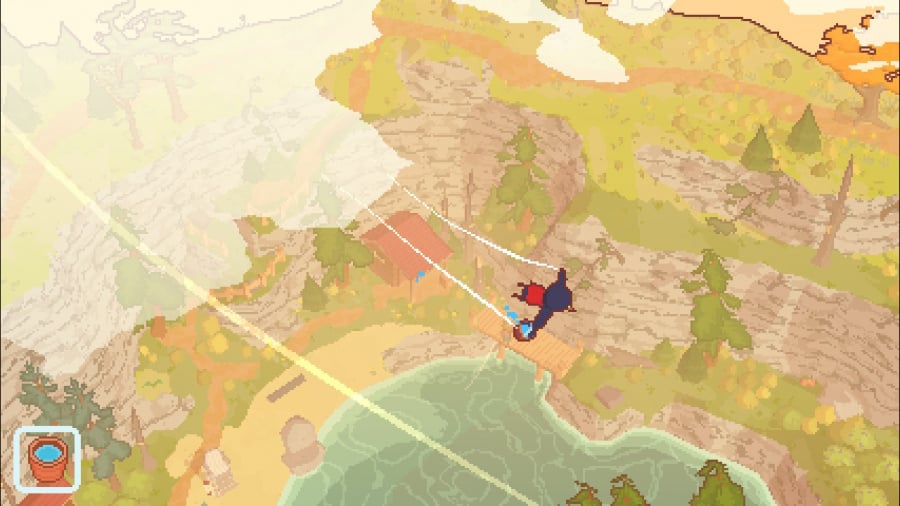 Climbing the mountain itself is the primary goal of A Short Hike, portrayed as a semi-isometric 3D platformer of sorts where your objective of reaching the summit is hindered by Claire’s lack of flight ability and energy, a resource increased by finding or buying Golden Feathers – each one allowing you to perform an additional jump in the air, as well as climb up sheer surfaces for longer. Think Breath of the Wild’s stamina system, but more concise.

En route to acquiring said feathers, though, are the distractions we mentioned. Fellow hikers, holiday-goers and natives mill around the island, going about their business. Chatting with them elicits breezy, likeable dialogue that’s neither bogged down with exposition nor so quirky is obfuscates crucial information. You’ll be able to meet (and race against) marathon runners, grab a fishing rod, take in a quick game of volleyball, trade a kid’s toy shovel for a real one (and dig up coins and treasure chests with it)… every action contributes marvellously towards your overall goals.

You’ll come up against walls in your progress as you play – often literally, a wall you’re not able to climb – but, brilliantly, your options on how to circumvent this are completely free and open. Even in the early game you’re able to explore a sizeable chunk of the island; that first Golden Feather at the visitor’s centre is signposted to some extent, but we went off exploring beforehand, managing to find some seashells, dig up some treasure and even stumble across a Feather that made us feel like we’d broken the game, only – of course – its discovery was entirely within the game’s parameters. That’s another thing A Short Hike excels at: making you feel like you’re pushing at its limits. Getting one over on it. Even when, of course, you’re not. 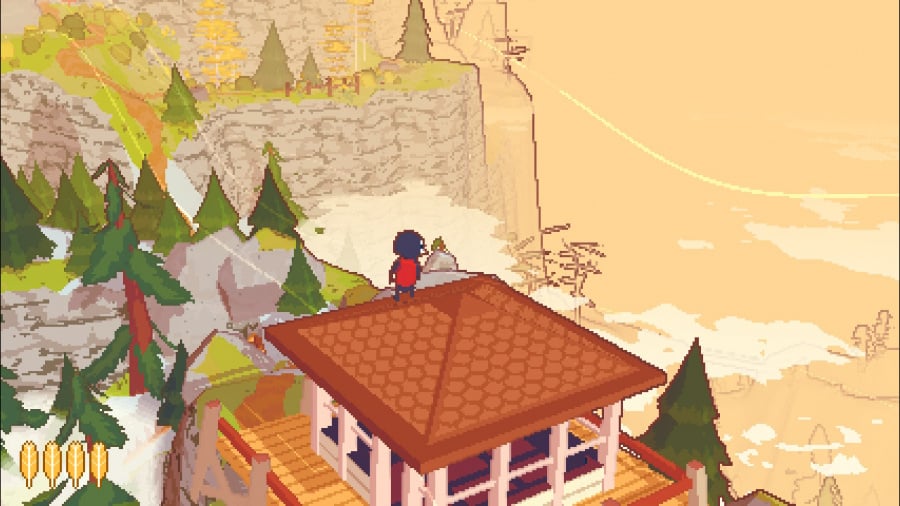 As you ascend higher and higher, you’ll find new twists and tweaks to the established controls and systems, gameplay variation without the frustration of a brand new mechanic at the eleventh hour. The difficulty increases, but while the terrain is hostile the game certainly isn’t; yes, you can tumble down the mountain and lose progress (it’ll never take you long to get back to where you were), but in the process of doing so you may find yourself in a new area full of stuff to see and do, or even just an old area from a new angle. A sudden reminder that, hey, you can make that jump now. Or if you climb back up even halfway, you can glide to that previously-unreachable seashell… and that gives you enough to take back to the kid who wanted them… but on the way there, you’ll realise you didn’t win that race yet… but in passing, you’ve acquired enough coins for another Feather, which means you can get back up the mountain quicker and easier… which… (and so on).

It’s that sort of game – a constantly giving, rewarding little box of joys. And when you finally make it to the top of the mountain and witness the game’s denouement, you’ll find the entire mountain, the climb, the struggle all thrown into a new perspective, both in terms of its narrative and, well, the fact you’ve got to make your way back down now. Remember how Celeste’s mountain was a metaphor? A Short Hike’s is a little less on-the-nose; a game whose journey has whatever meaning and resonance you choose to pour into it. It’s a story as freeform as its gameplay, a perfect synergy of everything video games do well. And we haven’t even mentioned the beautiful, lo-fi pixellated polygonal graphics. Or the lilting, evocative soundtrack. When everything compliments everything else so brilliantly, you barely even notice them. That’s what it means to be a truly complete game. 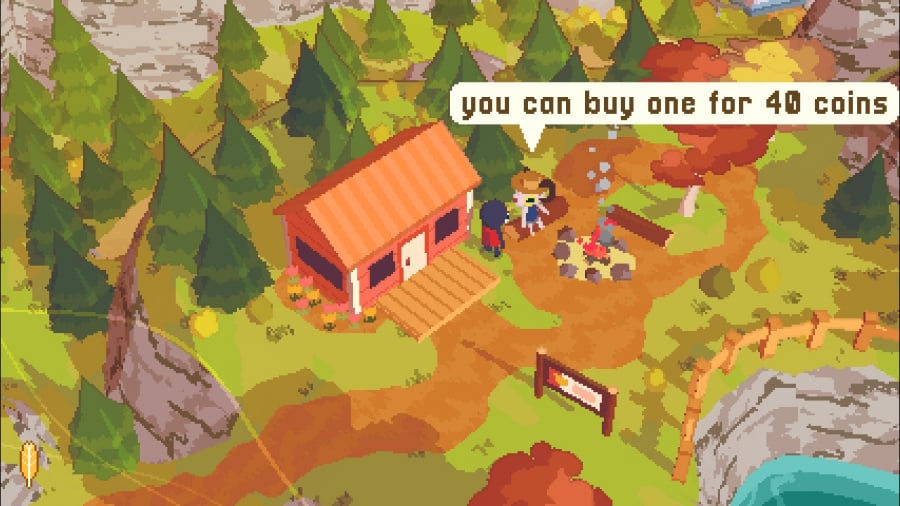 Nonetheless, we’ll give them some time in the sun – A Short Hike is beautiful to look at it. It’s visually more complex than it seems, managing to marry its attractive and unique visuals with the similarly undulating box of treats that it’s portraying. The music, too, is extremely fitting – pastoral when it needs to be, triumphant when you earn that triumph. Naturally, the whole things at 60 frames per second, and the controls are smoother than butter.

If we had to dig for any real criticisms, we could argue that A Short Hike is too, well, short, but to do so would miss the point. Making a beeline for the summit and ignoring the wealth of wonderful distractions, secrets and easter eggs is forcing the game into a round hole when it’s very much a square peg. A straight shot to the summit will take you an hour, tops. But it’s a hike, not a sprint. Except for the optional sprint you can take part in, of course. Maybe, maybe the ability to switch our equipped tool with the shoulder buttons may have been cool, but the game never requires any kind of rapid flicking between your inventory, so it’s almost entirely moot. 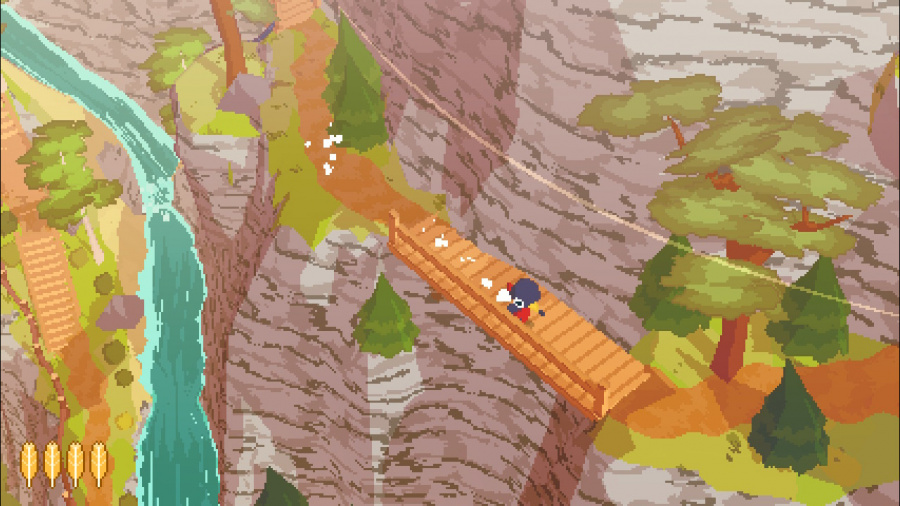 A game where we need to really dig for anything at all to complain about. You love to see it.

A Short Hike is a fat-free experience from top to bottom – or should we say bottom to top? It’s the kind of game that makes us just sigh with happiness when we recall our time with it, and even having played it through to its ostensible conclusion multiple times, we know for a fact there are still things to see and do on that mountain. What we have here is something of an apotheosis – a milestone in indie games akin to Cave Story, or Spelunky. The very best bits of multiple game genres, stripped of all padding and bloat, mixed perfectly into a delicious video game stew that only gets richer and richer the more you play. An exploration in every sense of the word, A Short Hike is cute without being twee, challenging without being obnoxious, and emotional without being cloying. A landmark game for all ages. Don’t miss this one.

The Last of Us Day Marked with a Clutch of GIFs

Review: Crysis Remastered is a Fresh Coat of Paint

The Last of Us Day Marked with a Clutch of GIFs

Review: Crysis Remastered is a Fresh Coat of Paint