A couple of years ago, Elden Pixels put out Alwa’s Awakening, a nice sort of throwback Metroidvania that built a quality experience around a few well-designed ideas. It didn’t exactly light up the charts, but Alwa’s Awakening still managed to amass a small following, one which Elden Pixels tapped last November went it launched the Kickstarter for a sequel, Alwa’s Legacy. Now, one pandemic and less than one year later, the team has launched Alwa’s Legacy for the Switch and it is a good time. Alwa’s Legacy routinely demonstrates mastery of the elements necessary to a good Metroidvania, making for a concise and well-made experience that’s certainly worth your money.

The story picks up with our hero Zoe waking up on a beach in Alwa, having lost all memory of how she got there. After a quick run-in with the last game’s villain, Vicar, Zoe is then tasked with taking a mysterious book and journeying around the land of Alwa to collect magical artefacts and fight off demons, which should hopefully fill in the blanks of her memory, too. 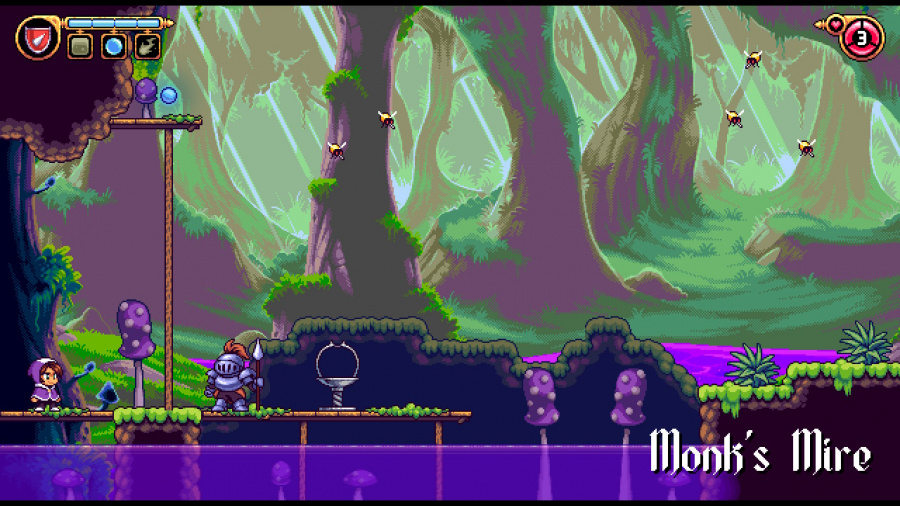 Much like the previous game, it’s clear right from the off that Alwa’s Legacy isn’t too concerned with telling a lengthy or particularly deep story, but that isn’t necessarily a negative. The land of Alwa is filled with all manner of memorable characters – like a young necromancer girl who spends her time in a graveyard recreationally raising the dead – and though this cast doesn’t come together in a memorable way, they go a long way towards making it feel like a cohesive world. Plus, the narrative largely staying out of the way leaves a lot more room for the excellent gameplay to stand front and centre, which makes your experience feel much more focused.

The land of Alwa is built in a non-linear, Metroidvania-style fashion, one which inspires quite a sense of awe on a regular basis. You’re always subtly prodded on where to go next, which helps sidestep the first game’s issues with direction, but it’s never explicitly laid out for you exactly what you have to do. This naturally encourages you to explore the intricately-designed worlds, which contain an expertly balanced blend of light combat, puzzle-solving and platforming.

These interconnected levels are much easier to navigate due to the improved map system, and your efforts to stray from the beaten path are typically rewarded with a nice pick-up. Some of these are more convenience focused – like the ‘tears’ that allow you to turn save points into warp points to get around quicker – while others are more focused on practical usage, such as the orbs you can use to upgrade Zoe’s abilities. 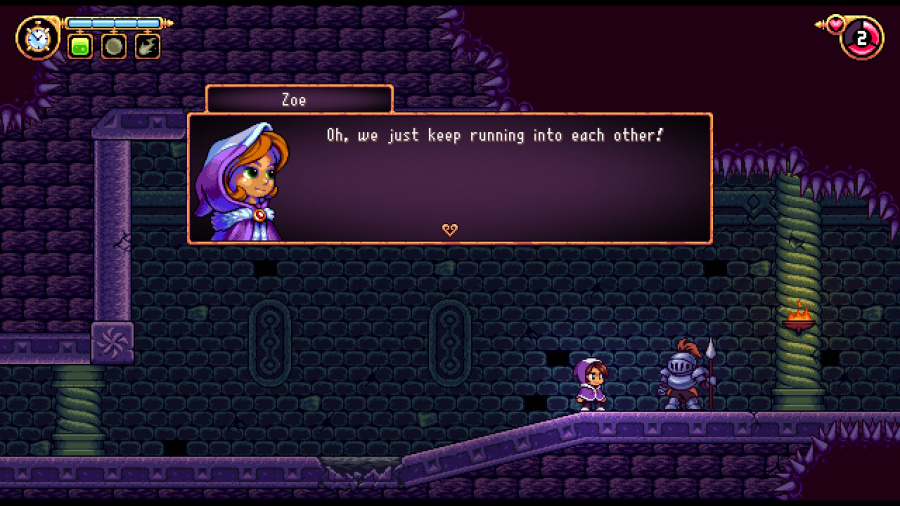 Zoe’s controls feel tight and responsive, which is quite a relief given how the platforming can sometimes demand some nimble fingers to manoeuvre between crumbling platforms, flying projectiles and encroaching enemies. This responsive movement is then supplemented well by Zoe’s suite of abilities, which is thorough, but not overcrowded. Most of Zoe’s actions are governed by three simple spells she gets relatively early, which allow her to spawn blocks, bubbles, and cast bolts of magic.

One would think three relatively basic skills like this would quickly grow stale, but the puzzles frequently find ways to utilize mixtures of these in interesting ways, and the gradual upgrade process sees them acquiring neat secondary effects to help combat and puzzle-solving along. In addition to these, Zoe also has a suite of new abilities that are more situational but add some nice flavour to each area’s environmental puzzles, such as a clock that can temporarily slow down time or boots that can let her walk on spikes briefly. Both new abilities and upgrades to old ones are doled at a well-measured rate, which keeps Alwa’s Legacy moving along at a nice pace. 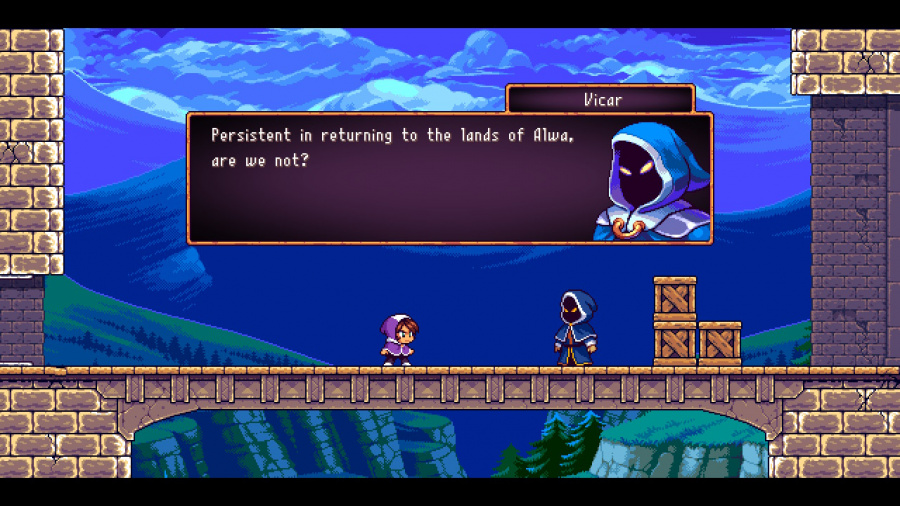 Though much of your time is spent exploring the overworld and finding new sections of the map to explore, the real highlights of your time with Alwa’s Legacy are found in the various dungeons dotted around. Though there are only a handful of these, each of these Zelda-like temples is crafted around a central theme and usually see you getting to both try out a new item and fight one of the many thrilling bosses.

Although on the surface these dungeons don’t seem to do anything different than the overworld, we rather enjoyed how each of them has some persistent element that you regularly return to interact with, such as a puzzle in one dungeon in which your whole dungeon dive is wrapped up in figuring out how to continue raising the water levels to get a treasure chest to the top floor so you can open it. Moments like that are memorable and help to give each dungeon a unique identity, especially considering that there’s a soft ‘story’ being told through deepening these mechanics as the dungeon wears on. All of this is to say, the dungeons are certainly a highlight here, and anybody who enjoyed the dungeon design of classic Zelda games of yore or, more recently, the last few Shantae games will no doubt appreciate the kind of design being employed here. 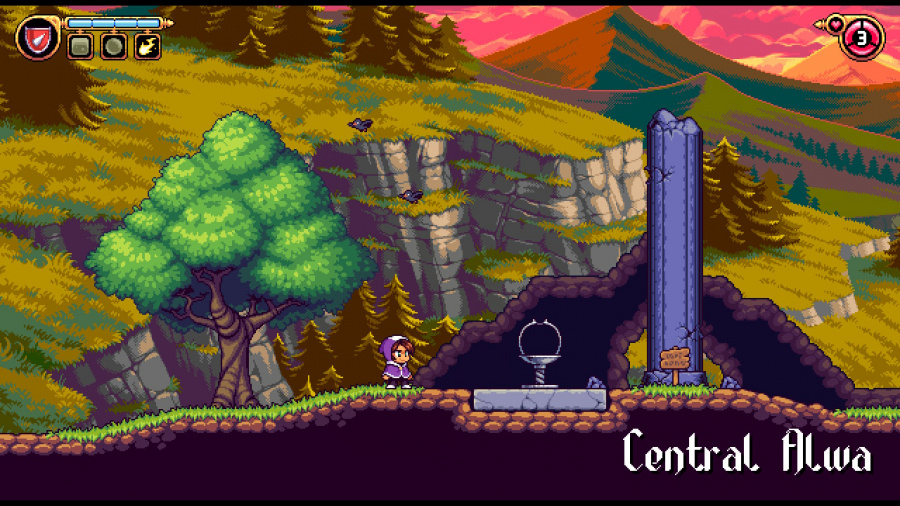 Alwa’s Awakening may have been a quintessential example of true 8-bit graphical presentation, but such limitations have been abandoned for the substantially more detailed art style employed in Alwa’s Legacy. There is some seriously tremendous art on display here, with environmental backgrounds being a real highlight. Zoe’s adventure takes her through a litany of different biomes and we were particularly struck at how Alwa’s Legacy consistently managed to surprise us with the design for each new place.

It’s hard not to stop a moment to just take it in when you cross into a new zone and are greeted by a splendorous mountain range looming over a verdant valley, making this the kind of game that’ll have you going for that ‘capture’ button plenty. Luckily, it’s not just the backgrounds that have gotten a lot of life, as the sprite work is equally top-notch. Enemy and character sprites are drawn and animated in a beautifully detailed fashion, which leaves plenty of room for expressive gestures and facial features. Suffice to say, it’s quite the step up from the charmingly simplistic visuals of Alwa’s Awakening, and this is just about as lovingly crafted as pixel art can get. 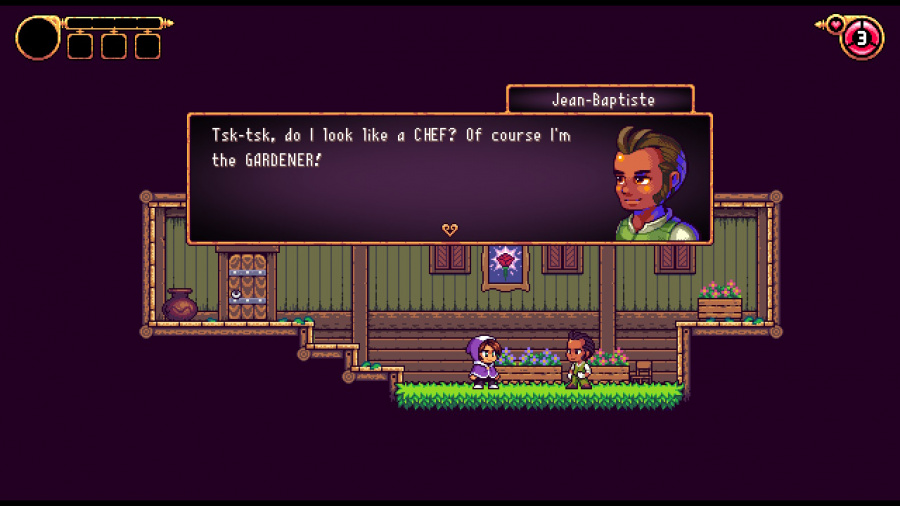 We feel special attention needs to be paid to a certain ‘X factor’ which seems to be present throughout the entirety of Alwa’s Legacy, though it’s hard to pin down precisely what it is. Simply put, there’s a very palpable sense of the effort put in on the developer’s side to make this the very best game it can be; everything from the little details like the mice scurrying around in people’s homes to the tactile sensation of simply jumping between platforms coheres into something that amounts to more than the sum of its parts. This is, plainly speaking, just a fun game to play moment to moment, and all the individual elements that pour into that make for an experience that you won’t want to miss out on.

Alwa’s Legacy is an excellent example of how to do a proper sequel; it takes everything that the original did well and builds on it, adds in a few new ideas of its own, and corrects the issues that were previously present. It may be a little on the short side, but Alwa’s Legacy is the special sort of game that only comes around once in a great while, reminding you of the kind of quality that’s possible when a dedicated crew puts in the time to make a polished and tightly designed final product. The best Metroidvania on Switch? That’s entirely subjective, of course, but those of you who enjoy the genre owe it to yourselves to give this a try.

Upon Further Review: Mertz debut, Badgers first game of 2020 worth the wait

Review: The Signifier Has You Step Into Memories to Solve a Mystery

Yet Even More Social Distancing In Video Games

Upon Further Review: Mertz debut, Badgers first game of 2020 worth the wait

Review: The Signifier Has You Step Into Memories to Solve a Mystery

Yet Even More Social Distancing In Video Games