Picture the scene: you and your battle-hardened Viking clan are storming a huge Saxon fortress. You’ve smashed through the main gate, torn your enemies to pieces in the courtyard, and now you’re racing towards the central keep. A degenerate king waits inside, surrounded by his finest warriors — but they’re not going to stop you. A few perfectly timed parries do the trick, and their blood-soaked bodies litter the floor. The despot rises from his throne for one last duel. He puts up a decent fight, but with your adrenaline gauge full, you unleash your most powerful ability and send him reeling. What’s left of his health bar evaporates as you bludgeon him into submission, and you’re prompted to finish him with a special move. All of your hard work is about to pay off — you’ve spent the last eight hours liberating a whole English kingdom in order to reach this pivotal moment — but unfortunately, he collapses on the spot. Your kill animation still plays, however, as if your opponent is still standing — your Viking hero triumphantly shoving his or her blade into nothing but thin air. 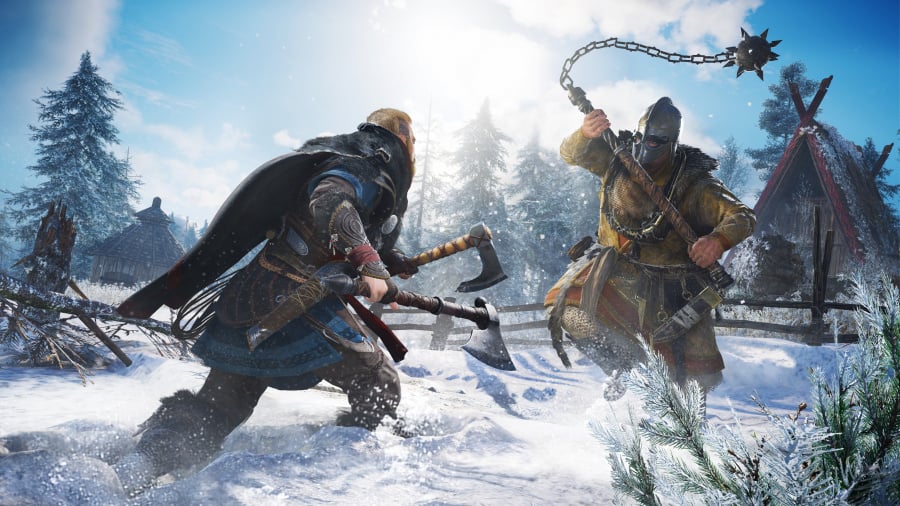 What should have been a moment of profound satisfaction has been ruined by yet another bug. Assassin’s Creed Valhalla is quite possibly the buggiest game that we’ve played since the disaster that was Fallout 76 at launch.

To be clear, the bugs in Assassin’s Creed Valhalla are mostly cosmetic, but they’re absolutely everywhere. You’ll struggle to play for more than five minutes without running into some kind of visual hitch, be it a broken character animation, a missing texture, or an enemy who just stands there doing nothing as you cave in his skull. We can handle the odd open world glitch, but these minor bugs really start to rack up, to the point where Valhalla feels unfinished.

It would take far too long to list every bug that we encountered during our time in merry old England, so here are a couple of highlights. In one side quest, we saved a woman’s pet fox from a burning building. The woman was badly injured, but she was able to say goodbye to her beloved beast before kicking the bucket. Touching stuff, except seconds later, she snapped to her feet and stood there looking at us like nothing had happened. Then she shouted something and ran off into the hills. Then the fox just blinked out of existence. 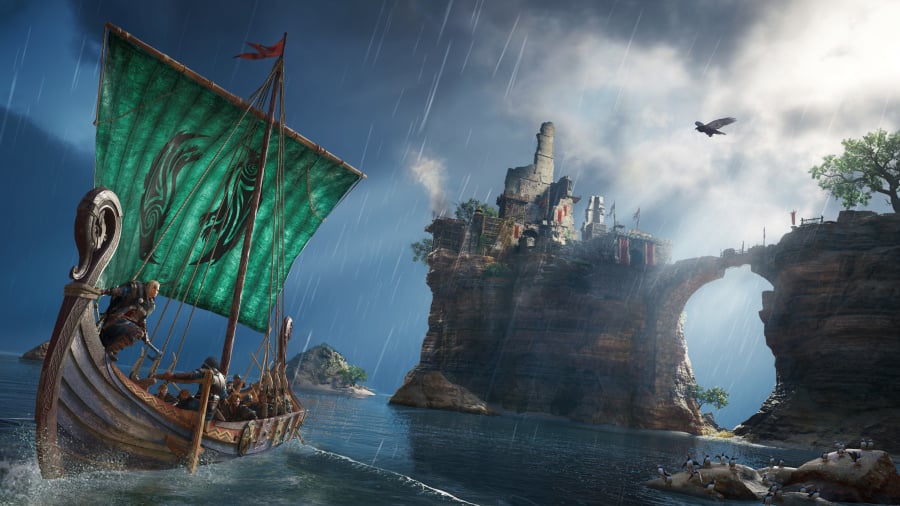 Another side quest saw us rid a family’s home of a foul stench. An annoyingly voiced child talked us into removing his father’s rancid belongings — the source of the smell — but upon reporting the job completed, that same child stretched to the size of a small giant, towering over our character as we made conversation. We don’t even know how a bug like this is possible, but our only regret is that we didn’t reach for the Share button. Presumably because we couldn’t believe what we were seeing.

Now that last bug might sound amusing — and admittedly, looking back on it, it was — but our point is that Valhalla can be shockingly rough. And that’s a massive, massive shame, because if you can somehow look beyond the bugs, this is easily one of the best Assassin’s Creed games yet.

In its story and characters, Assassin’s Creed Valhalla stands head and shoulders above its predecessors. The storytelling in previous instalments, like Assassin’s Creed Odyssey, felt somewhat disconnected due to the sheer amount of open world bloat standing between you and the next important plot point. But here, there’s a heavy emphasis on main story missions, and there are a lot of them. It’s a genuinely impressive effort that presents us with endearing heroes and brilliantly crooked villains, all wrapped up in a plot that involves political intrigue, occult secrets, and historical happenings. 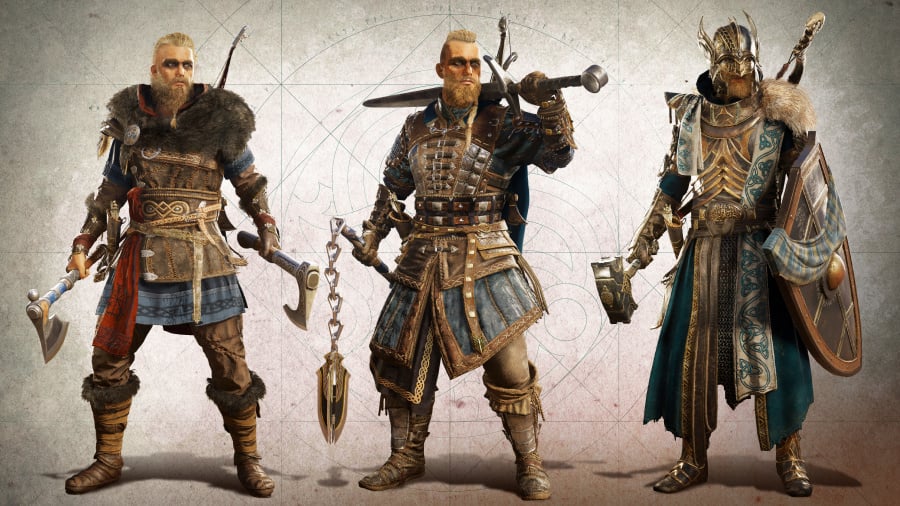 It’s the game’s structure that allows all of these aspects to shine. Your protagonist, a renowned Viking warrior named Eivor, sails to England from Norway, following on from dramatic events that take place during the prologue. Once settled in greener lands, our hero is tasked with forging alliances with the many kings and clan chiefs of a fractured and war-torn 9th Century England. The story guides you from region to region, each one of them housing a series of main quests.

Each kingdom is defined by its own cast of characters and the task at hand. In one region, you might have to help a young prince ascend the throne by eliminating the opposition. In another, you may have to unite the peasantry against a rampaging Viking clan that’s hellbent on terrorising towns and villages. Although most missions do boil down to killing a bunch of baddies, they’re given meaningful context through surprisingly sharp writing and a very well rounded cast.

The story’s presentation isn’t perfect thanks to some janky animations and the fact that most of our Norse heroes can’t seem decide on any kind of accent, but this is still the most ambitious and engaging narrative to ever grace Assassin’s Creed. Even player choice has been given more weight, as your decisions can have lasting consequences on the country that you now call home. 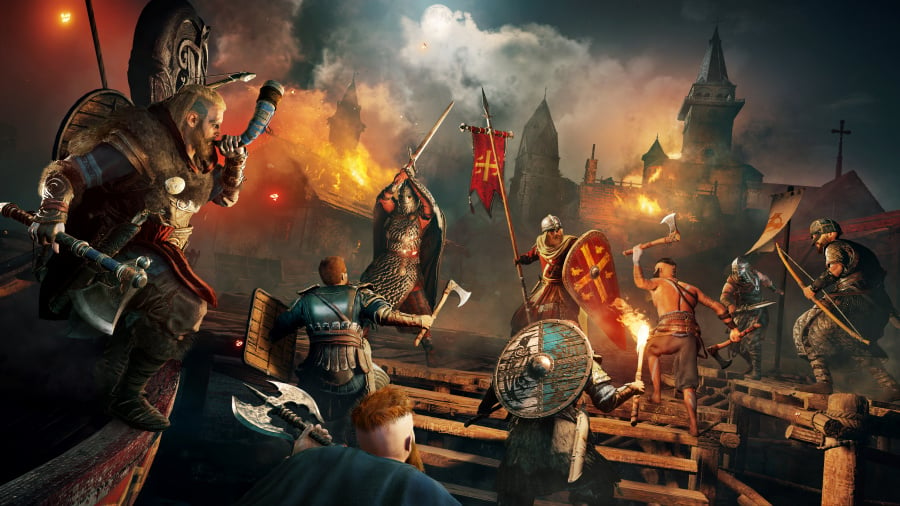 Speaking of home, Eivor’s settlement, Ravensthorpe, is at the heart of almost everything that you do. It’s a cosy countryside retreat that you can come back to at any time and develop with the resources that you’ve plundered throughout your adventures. It’s where you’ll meet new allies, hold feasts, and reflect on your journey. As far as hub locations in video games go, it’s a very good one, and it fast becomes a place that you’ll want to see thrive.

Valhalla’s focus on story also means that the open world doesn’t feel anywhere near as cookie-cutter as it does in other Ubisoft games. For once, the map isn’t completely coated in bandit camps and other throwaway activities. In terms of design, it feels much more organic, and whether they house an enticing secret or provide the backdrop for main quest, the majority of locations have personality and a purpose. There is, of course, still a lot of optional content to discover, but again, this is a notable refinement of the modern Assassin’s Creed formula.

But what about the old Assassin’s Creed formula? Well, Valhalla looks to please disgruntled fans that feel as though the series has forgotten its roots. Make no mistake, this is still an open world role-playing game in the same vein as Assassin’s Creed Origins and Odyssey, but a number of traditional mechanics have made a return. Most notably, Eivor receives a Hidden Blade early on, allowing for all kinds of stealthy stabbings. There are also towns and cities where Vikings simply aren’t welcome, and so if you want to avoid bloodshed, you can throw a hooded cloak across your shoulders and blend in with civilians to avoid detection. It’s classic Assassin’s Creed, and we didn’t realise how much we missed it. 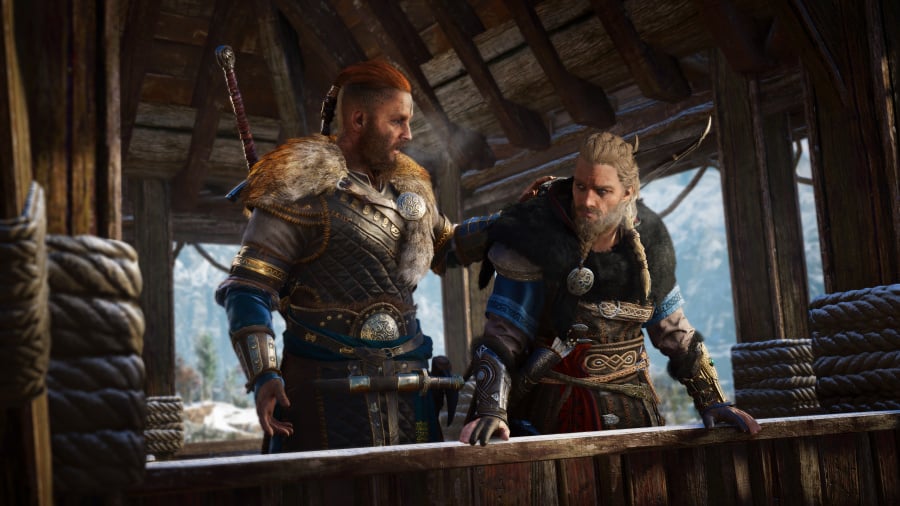 There are times, however, when bloodshed is inevitable. Eivor is, after all, a strong willed Viking who dreams of blood-stained glory, and so you’ll often partake in raids and other huge battles where stealth isn’t really an option. This is where the game’s chunky combat system enters the equation, and to be frank, it doesn’t make a great first impression. Compared to Origins and Odyssey, this feels more rigid and contextual. An all-new stamina bar ensures that you can’t just dodge and roll your way to victory, forcing you to battle with composure and patience.

Initially, it comes off as being poorly balanced. Boss enemies tend to have a huge amount of health, and chipping away at that big white bar feels like an exercise is tedium. But give it time, and the combat system does start to click, little by little. Skill books dotted across the open world grant you all sorts of abilities, while a sprawling skill tree lets you purchase both passive stat bonuses and all-important perks.

What’s more, an overhauled loot system makes each weapon and armour set feel unique. There are no random loot drops here — every piece of gear that you find has its own identity, with exclusive stats and enchantments. Finding a new axe, great sword, or bow actually feels like you’re being rewarded for your hard work, and you’ll definitely want to scour the land for some of the game’s most powerful equipment. 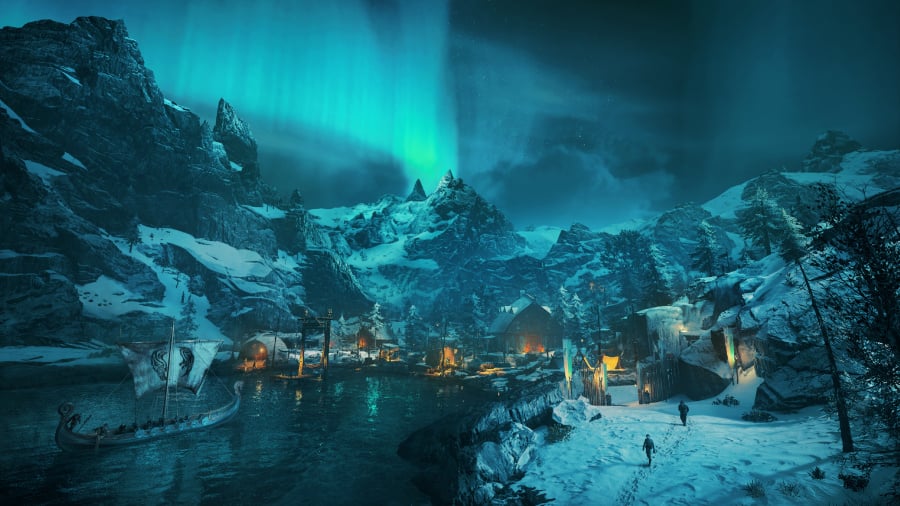 Eventually taking everything into account — abilities, skills, and gear — the combat system find its footing and evolves into something very satisfying. While its foundations are nowhere near as solid as what you’d find in something like Ghost of Tsushima, it’s the level of customisation on offer that sells Valhalla’s action. Whether you like to sit behind a sturdy shield or dual wield a pair of deadly Danish axes, there are so many options to explore — and for a game as big as this, that’s important to get right.

As for how the game runs on PS4, we’re honestly quite impressed — obvious bugginess aside. Naturally, this is the best looking Assassin’s Creed title yet. The rolling green fields of England and its imposing castles have all been beautifully recreated. When the lighting’s just right, it’s a gorgeous game, even if the pop-in can be a bit jarring when travelling at high speed. There’s no doubt that Valhalla is going to look glorious on PS5.

But you know what’s not glorious? Valhalla’s modern day storyline. That’s right, the one and only Layla Hassan is back, and she’s still a woefully bland and frustratingly fickle character. Mercifully, the modern day stuff counts for just a tiny fraction of the game’s overall runtime, but it still serves to rip you out of the experience whenever it does rear its ugly head — and we mean ‘ugly’ in the literal sense. Perhaps in knowing that it’ll be the least played part of the entire release, Ubisoft has opted for terrible looking character models and blurry, low resolution assets whenever you’re in control of Layla. We don’t know if this is yet another bug, but the difference in visual quality between the past and present is bemusing.

The dawn of a new generation: PS5 is almost here