Harmonix, through the years, has carved out a huge niche as the head of the rhythm game movement. One of, if not the only constant for music games, Harmonix has created an impressive array of revolutionary titles. Starting with Frequency and Amplitude, running through the Guitar Hero and Rock Band craze, and Audica last year, we now arrive at Fuser. And having put a pretty hefty number of hours into the title, Harmonix may have truly outdone itself this time out.

For anyone familiar with the board game/app hybrid Harmonix made in 2017, Dropmix, Fuser is an extrapolation of this. You assume the role of a fresh DJ on the festival circuit, and it’s up to you to chop and screw your way up the ladder and gain notoriety. This is accomplished by building up a war chest of licensed tracks and then combining individual elements of each song into the ultimate festival banger. The base game includes 86 licensed songs, from all manner of genres. There is, however, definitely a greater emphasis placed on hip-hop and EDM thanks to their particularly catchy drum beats. There’s a little bit of everything though, ranging from artists like Sia and Dua Lipa to The Killers, Megadeth, and yes, even Smash Mouth. There’s an additional batch of 25 DLC tracks that will launch alongside Fuser, but you can get them as part of the game’s pricey VIP Edition too. With this magnitude of songs — a number that rivals most of Harmonix’s Rock Band titles, even — the amount of creative flexibility on offer is incredible. 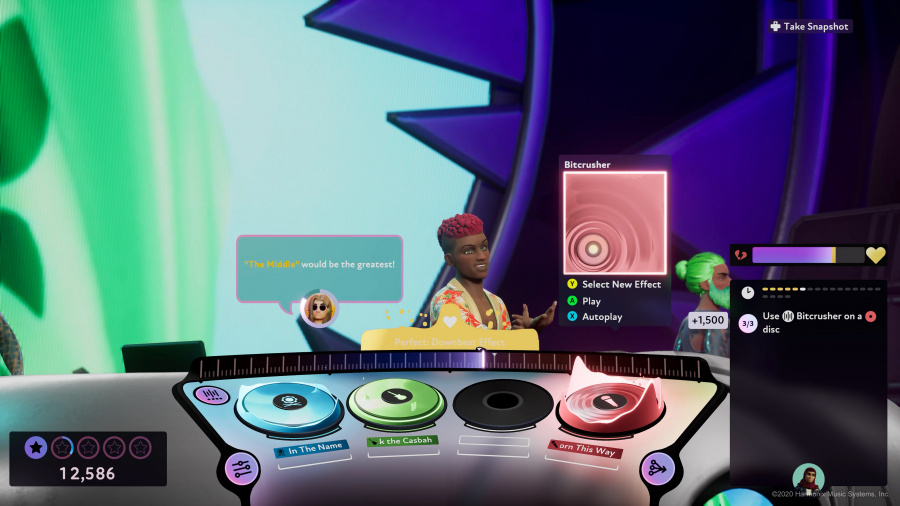 And flexibility is the name of the game. Fuser’s toolset provides an insane amount of freedom. If you try and dive right into the deep end, it can actually be quite daunting. The depth of the software is kind of ridiculous, so definitely start with the campaign. The story mode introduces all of the things you can do with your “deck,” and it does so slowly. This allows you to learn the various components of the experience at an easier to digest pace. When you first start you basically just mix and match instruments from different songs, but as you progress, the variables that impact things increase exponentially. You start getting the ability to alter the volume of individual pieces, stack pending track changes so they don’t take effect immediately, change the key your music is in, choose if it’s a major or minor one, alter the BPM — the list goes on and on. The sheer number of options available to the player is only outclassed by how impressive the implementation of it all is.

The game takes something that’s theoretically complicated and dumbs it down to such a level that even people like ourselves, with not a single musical bone in our bodies, can not only make something but make something that sounds good. If you don’t feel terribly confident in your abilities, which is likely at the start, the game is more than happy to adapt and do a lot of the heavy lifting for you, to ensure you don’t stray too far from crafting a coherent piece. As you progress in both your abilities and the campaign, more and more of these training wheels are stripped away until you’re doing pretty much everything yourself. As more and more responsibilities are thrust upon you, your ability to recognise what does and doesn’t work in a song improves as well. 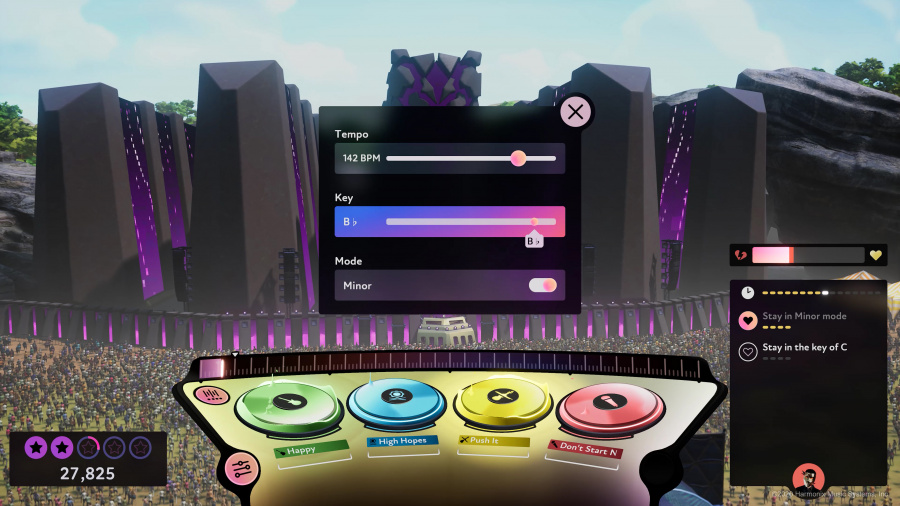 In the beginning, every mix sounds decent (with the possible exception of the vocal track from the Megadeth song, but that was always a losing battle; you try making Dave Mustaine sound good). You’ll start to pick up trends, and rhythms that you were completely oblivious to at the start, and the added degree of control means you can make some pretty wild stuff. Even after five hours, we were able to come up with some insane mixes that had absolutely no business sounding as good as they did. There are enough meme-tangential tracks that you can make some frankly absurd songs. Ever wanted to mashup Smash Mouth with Rick Astley and Evanescence at the same time? Now you can. And that’s not even everything that you can do. We haven’t mentioned the pads that you make your own samples, loops, and beats on, or the array of post-processing effects you can utilise. The game is practically a music workstation in itself, that those with no musical scruples can make art with. The whole experience is an empowering marvel of engineering. The only obstacle ultimately winds up being the rate at which you earn currency to unlock new tracks or effects. Level progression is slow, especially while you’re doing the story mode, and feels more grindy than could be considered ideal.

This depth of utility does mean sacrifices wind up being made in other areas, though. The campaign is a glorified tutorial that doesn’t do much of anything visually that you won’t be able to use in free play. The animations and character models look mostly unchanged from how they looked dating back to the first Rock Band, of course with minor improvements. Stability seems to be another problem as well. While we never had any frame hitches, with did encounter multiple hard crashes. They exclusively occurred when navigating menus, so it never really went past being a nuisance, but it’s of course preferable that it not happen at all. 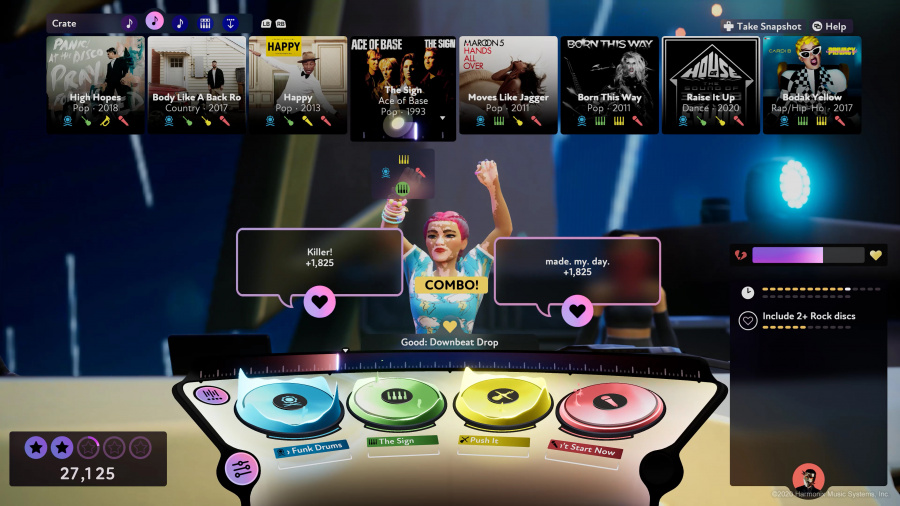 The other modes the game offers are quite fun too. There’s of course a freestyle that serves as a damn impressive mixing station, and it even offers a co-op mode. With options for both public and private lobbies, creating music with your friends hasn’t been this easy since you were in your parent’s garage. There’s a battle mode too, which is essentially just Dropmix plopped down inside of Fuser. It’s a 1-on-1 mode where players try and out-mix each other, by playing pieces of songs that cater to an invisible crowd’s tastes and interests. Certain songs have certain point values, and the better you time your drops, the better you do before you ultimately knock your opponent out of the match. It’s all good fun, and as long as the game is able to maintain a stable player base, it should be wonderful.

That longevity is honestly our biggest concern. The toolset and all of the groundwork is, at a minimum, extraordinary. But will the player base show up? The game is a full-price title, with an additional hefty sum for the day one DLC. We could see that scaring a number of players away on its own. The game doesn’t necessarily look like something that’s worth its price point. That is, until you play it. That could prove to be a hard proposition when many will switch off after deciding they’re no good at making music, or that it doesn’t look like a $60 game. As for the players that do want to keep coming back to the experience, a consistent DLC pipeline will be key. Rock Band 4 has continued to release tracks every week with impressive regularity. But Audica, after an initial couple of months with regular music drops, faded away into the background. Which route is Fuser going to take? If we had our pick, we’d certainly like to see a steady stream of new songs for the experience.

Fuser is, frankly, a staggering technological achievement. The game takes the act of making music, an incredibly challenging thing to accomplish, and practically trivialises it. You don’t need to have any kind of prior knowledge to make meaningful music with this title. The game walks you through everything with a perfect learning curve and near-limitless flexibility. It remains to be seen if it will court a large enough player base to confirm its existence, but as it currently stands, this title is yet another unexpected jolt of inspiration for the rhythm game genre, which even just a few years ago looked all but dead. Between the brilliance of rhythm titles in VR and now Fuser, the future is bright indeed.

Review: Video Game Documentary Insert Coin is a Fun Look at an Interesting Time in the Industry

Review: Video Game Documentary Insert Coin is a Fun Look at an Interesting Time in the Industry