Genshin Impact is the new benchmark for free

Genshin Impact is a free-to-play RPG that has been frequently compared to The Legend of Zelda: Breath of the Wild, thanks to a similar cell-shaded art style. As you would expect, many gamers have been eagerly anticipating the release of Genshin Impact, and now that it’s here, it would seem the wait was actually worth it. Sure, this is a free-to-play release. It’s also a gacha game. So all of the typical underpinnings of F2P titles are here. Thankfully genuine care was taken to craft an enjoyable game that doesn’t teeter too far into pay-to-win territory, resulting in a game that’s not only worth playing but elevates the F2P field by setting a high benchmark that’s going to be tough to beat.

Above, you can watch the latest gameplay trailer for Genshin Impact, though it doesn’t really explain the actual gameplay loop. I suppose this is why a forced tutorial exists in the game, in order to explain all of the title’s different systems. Everything is revealed in its own time, and with a lot of polish, so it’s fun to learn as you go since the world is actually captivating to explore. More or less, this is an action RPG where you collect heroes. You can hold four heroes on your team, and since many offer different elemental powers, you’ll want to build a team that brings the best spread of damage since you can swap your four heroes on the fly as you play. You see, your enemies have elemental weaknesses, and so you’ll have to use your team to its best abilities in order to get a leg up on your foes. 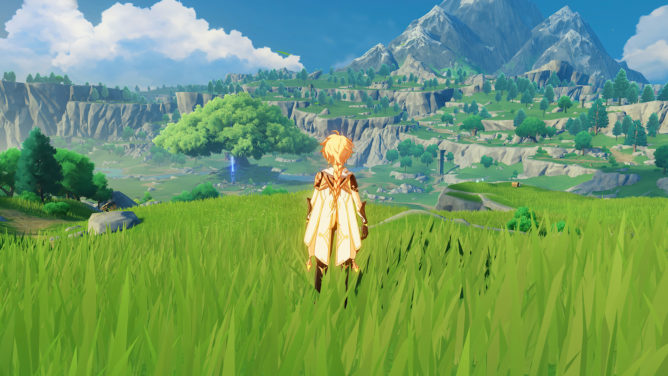 This sure looks familiar

Of course, Breath of the Wild similarities are in the mix as well. You can climb in Genshin Impact, and like all of your actions, this mechanic is tied to a stamina meter, so as you level up, you can reach higher and higher. Heck, you can glide too, which is how you’ll get down from the places you climb. And the comparisons don’t stop here. This is an open-world game, and so it offers plenty of areas to explore, along with dungeons to raid, and secrets to discover. What’s amazing is that you’re rewarded for exploring the in-game world, which is rare for a mobile RPG. There’s no auto-movement here. No auto-combat either. You have to actually play this game, which is refreshing indeed.

Since Genshin Impact is an RPG, you can expect a plethora of ways to upgrade your crew and their weapons. Like most free-to-play mobile games, there are many different areas to boost your characters, but at least the menus in which you do so are clean and fairly self-explanatory. Seriously, the UI is top-notch. It’s rarely cluttered, and the typical alerts and pop-ups you would expect in a game like this are hidden in their own submenu.

Now, as far as the story goes, it’s a little generic. At the start of the game, you’ll choose to play a brother or sister, with the other getting kidnapped, which starts your quest to save them. You’ll immediately meet up with a very anime-like character that constantly repeats its own name while talking to you, which is annoying but offers a window into the strange world you’re stuck in, so she serves as your guide. It’s a simple setup but it offers a good introduction, just don’t expect too much beyond familiar anime tropes. At the very least, the story is interesting enough to keep people coming back.

As far as controls are concerned, mobile players will have to use touchscreen controls, but at least they work well. Sadly there appears to be no support for physical controllers, which is odd since the game supports them on PC and PS4. Luckily Genshin Impact offers cross-platform support for its online co-op content (which is unlocked at level 16), and it also supports cross-saves, so you can easily pick up where you last left off no matter if you want to play on mobile, PC, or the PS4 (a Switch version is also coming soon).

Since this is a free-to-play release, I’m sure everyone is wondering how the title is monetized. As you can see on the Play Store, in-app purchases range up to $99.99 per item, and they mainly exist to purchase in-game currency that can then be used to buy new gacha draws. So really, Genshin Impact is monetized just like every other gacha game, which is often a love-it or hate-it kind of thing. While I’m personally not a huge fan of this monetization method, so far, I can’t say it impacts the game negatively. Sadly, as we all know, the current balancing could change at any time.

Keep in mind, Genshin Impact is a large and demanding game. You’ll need at least 6 GB of storage, and mid-range hardware will struggle with the higher graphics settings, though there are options to turn them down a bit. So far the game plays at a solid 30 FPS, and 60 FPS support should be coming in an update.

All in all, I’m highly impressed by Genshin Impact. While the lack of controller support, questionable monetization, and familiar F2P underpinnings hold this title back, it’s hard to ignore the amount of work that went into this release. Not only are the graphics superb, but the in-game world is totally worth exploring, the story is interesting (if a little contrived), and the ARPG gameplay is actually fun while offering some depth, which means the game requires skill instead of a fat wallet. After years of pointless MMOs and ARPGs that play more like idle games than anything you’d expect on a console or PC, it’s refreshing to play a game that’s had some thought put into its design. Genshin Impact has just set the high-water mark for mobile gaming, so even if you’re not a fan of gacha games or F2P releases, I still recommend checking this title out. Even if you’re a perpetual cynic like me, I bet you’ll come away impressed.

Start your adventure today in a vast magical world with friends across multiple platforms!

With Genshin Impact, miHoYo brings players to the visually stunning world of Teyvat, a land ruled by seven elemental gods known as the Archons. The player takes on the role of the mysterious “Traveler,” who embarks on a journey to discover the fate of their lost sibling and unveils the mysterious secrets of this world along the way. In the course of their journey, players can explore a wondrous world of diverse cultures and terrain, join forces with over 20 playable characters, master the art of elemental combat and exploration, and unravel the countless mysteries that Teyvat holds in store.

“For the past three and a half years, our team has been working towards creating a sprawling, beautiful open-world game in which players have the freedom to explore alone or bring friends along for the journey,” said Forrest Liu, General President of miHoYo. “We’re very grateful to have over 10 million players pre-registered for Genshin Impact across PS4, PC, and mobile around the world. We can’t wait to see you all in the world of Teyvat.”

According to miHoYo, today’s launch is just the beginning of Genshin Impact’s journey. On release, players will be able to explore Mondstadt and Liyue Harbor — two of the seven major cities in Teyvat — each with their unique cultures, stories, and vast surrounding countryside, and both full of a diversity of creatures, monsters, mysteries, and hidden treasures. The game will continue to expand with more cities, follow-up stories, new characters, and seasonal events through live-service updates to enrich the gameplay and exploration of the world of Teyvat. Future patches will also seek to continually optimize Genshin Impact’s technical performance for each platform.

Players can now download Genshin Impact for free on PlayStation®4 via the PlayStation™Store, on Android via Google Play, on iOS via the App Store, and on PC only via Genshin Impact’s official website (genshin.mihoyo.com):
Pre-install is available for all supported platforms and regions as of September 28 at 00:00 (UTC +8).
The server start time for all regions is September 28 at approximately 10:00 (UTC +8).

About miHoYo:
“Tech Otakus Save the World!” Founded in Shanghai in 2012, miHoYo dedicates itself to being a leader in the interactive entertainment industry, with creative content covering games, manga, novels, and more, striving for perfection in all it delivers. miHoYo endeavors to bring its vision to the players of the world, and create a lasting and supportive community

The Good, The Bad and The Ugly: Alabama at Missouri Game Review

Genshin Impact Adventurers Assemble event: Rewards and how to get Invitation Code on PS4

Xbox Series S is already starting to miss out on next

Genshin Impact Adventurers Assemble event: Rewards and how to get Invitation Code on PS4

Xbox Series S is already starting to miss out on next