We’ve seen plenty of games critique capitalism in recent years and on Switch alone, 2020’s already had The Outer Worlds and Journey To The Savage Planet make the jump. Joining them next is Going Under by Aggro Crab, but rather than take us to a science fiction setting, it brings that satirical humour into an all-too-familiar setting instead: your workplace. Mixing everyday office life into a roguelite dungeon crawler, this story won’t universally appeal, but it marks a highly entertaining debut from these new developers that packs a serious challenge.

Set within Neo-Cascadia, Going Under sees you working for a carbonated drink brand called Fizzle, owned by shipping giants Cubicle. You play as Jackie, an unpaid marketing intern arriving for her first day and within minutes of getting there, monsters appear within Fizzle’s building. Adapting to this unexpected situation quite swiftly, Jackie is pressured into defeating more baddies by her manager, Marv, leading us to an unwinnable first dungeon before being introduced to her new co-workers: Swomp, Kara, Fern, Tappi and Fizzle’s CEO, Ray. It becomes clear this wasn’t the internship she was previously advertised, and soon enough, she gets co-opted into further fights. 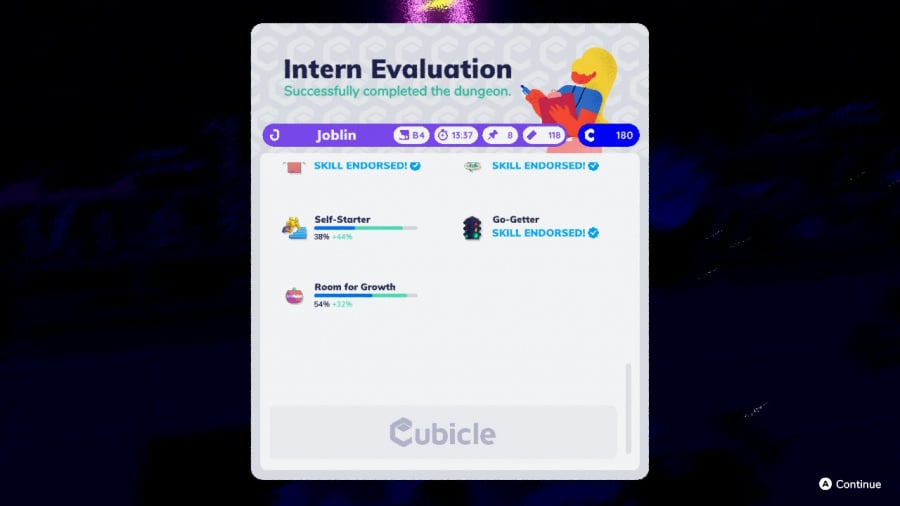 At the heart of any satire is a political message, and behind this colourful visual presentation, Going Under communicates its own message with consistency. Parodying Amazon via Cubicle, it tackles mind-numbing corporate culture, capitalism’s worst excesses and a jaded workforce forced to participate in a broken system. It treads into other subjects with less focus, including modern-day privacy concerns and the trading of civil liberties for convenience. This is all backed by a strong sense of humour – though it’s an admittedly niche one as it sometimes relies on memes, one example being how the exit screen states “Noo don’t leave, you’re so productive haha”. Those who enjoy these jokes will love it but that humour soon becomes dated.

Within Going Under, failed start-ups don’t disappear; they get banished to the underworld, cursed to remain there for all eternity as wandering monsters. It’s a harsh punishment for failure and these ruined companies become your foes. There are three procedurally generated dungeons in total, so no two playthroughs are ever the same, and each start-up spans across four floors, comprising of gig economy recruiters, cryptocurrency and dating app employees. Waiting at the end of each dungeon is the respective CEO, bringing a literal definition to “boss” fights. Whether you’ve chosen traditional weaponry like a Warhammer to office supplies including the humble stapler, anything you find can be used as a weapon in this game. 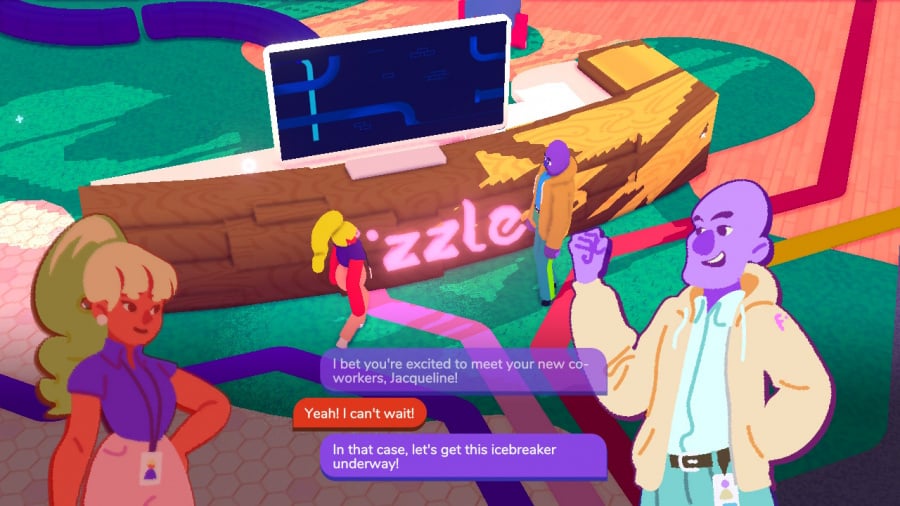 Combat is simple, giving a basic attack whose strength varies depending on your selected weapon and a dodge roll for defence. Attacks can be charged for greater damage, too, also letting you throw items about, but each weapon has limited durability, so you must regularly switch things up. Skills can also be gathered throughout each dungeon run and these add buffs such as increased health, proficiency in two-handed weapons or dropping bombs when dodging. They don’t stick with you upon leaving, but using them gains experience and if Jackie becomes proficient in them, she can enter dungeons with one skill already equipped. Upon gaining a smartphone, apps can be randomly found, and these have their own perks like ordering in new weapons, creating a dummy Jackie to fool enemies, and more.

It’s easy to learn and by mixing together skills and apps, combat holds a surprising level of depth, helped by a good variety of enemies so it never feels repetitive. The only downside is throwing items, which can prove rather cumbersome in terms of aiming – but that’s honestly quite minor. Once defeated, enemies drop money (plus the occasional sandwich) and each floor holds an underground shop to purchase items from, providing boosts like food for health refills, extra heart containers or new skills. You can also earn Cubits, a separate currency that sticks with you once you leave a dungeon and that can buy further skills back in the office. 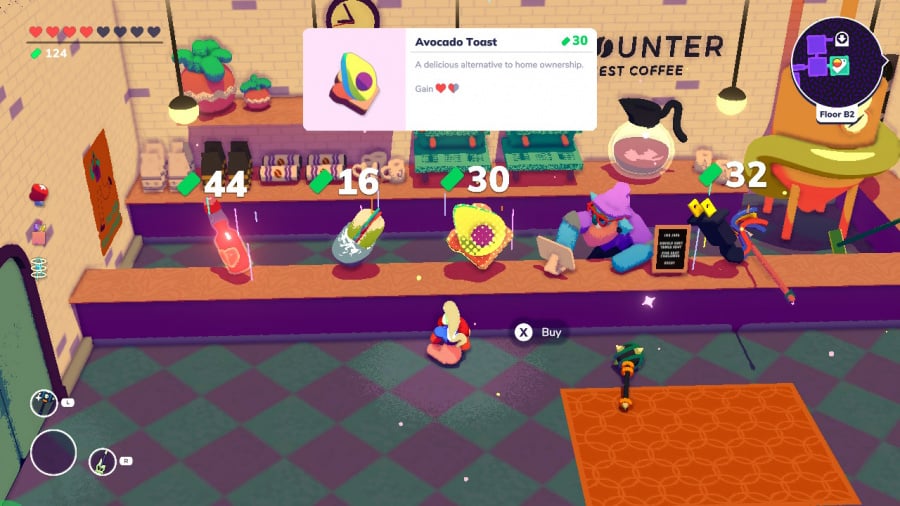 Dungeons are quite challenging, so take what help you can get and you’ll need to make good use of that dodge roll to survive. There aren’t difficulty levels, but if you find yourself struggling, Going Under includes assist options which grant extra lives, higher weapon durability, lower enemy health and more, making it a more accessible experience. Optional challenges also emerge once per floor, tasking you with missions like “Defeat the enemies quickly” or “Mine Styxcoin”. Your performance is ranked out of five stars, rewarding you with various item crates that depend on your score. The “Hauntrepreneur” offers his own challenges too; it doesn’t cost coins but makes life harder in exchange for skills, such as causing enemies to explode upon their defeat.

Outside of Marv, each Fizzle employee becomes Jackie’s mentor, making for quite a clash in personalities; they ask her to carry out various tasks inside dungeons. Usually, these are simple requests like “defeat X amount of enemies with a particular weapon”, but some offer special challenges, including crashing a demon pizza party and walking Kara’s dog. Upon completion, your colleague relationship levels-up and that offers increasingly beneficial perks, such as Ray’s company credit card or monster allies to assist you. Only one co-worker can be selected at a time though, so choose carefully. This essentially amounts to side missions and not only does it bring some good character development, it adds a level of replayability which means that the game remains interesting.

Going Under makes for an excellent debut from Aggro Crab. Though the humour won’t be to everyone’s taste, it brings us a corporate satire which hits closer to home than most, and by doing so consistently, never feels ham-fisted in its execution. This isn’t the longest experience you can find on Switch – taking around 10 hours to fully complete including side tasks – but it provides an entertaining story, and one that’s filled with great combat and high replayability. Keeping you hooked until the end, this dungeon crawler comes with a modest recommendation.