Ever since Steven Spielberg first made the stunning discovery of the existence of dinosaurs back in the summer of 1993 (they certainly didn’t exist before then, right?), the human race has been enraptured by the power and majesty of these mysterious, magnificent beasts.

In the immediate aftermath of Spielberg’s Oscar-winning find, theme parks began to spring up on remote islands in an attempt to harness the wonder of these natural marvels, imprisoning them with a view to turning them into the ultimate money-spinning machines. Of course, wild prehistoric power such as this can never be fully contained by mere mortals, and so each and every one of these ill-advised visitor attractions ended in bloody massacre.

As has so often been the case throughout human history, no lessons were learned and as one park descended into chaos and death, another would swiftly open in its place, doomed to repeat its mistakes. Now, thanks to Frontier Developments, you have the opportunity to seize the reins and design and build your very own disaster land; your very own (Alan Partridge voice) Jurassic Park! 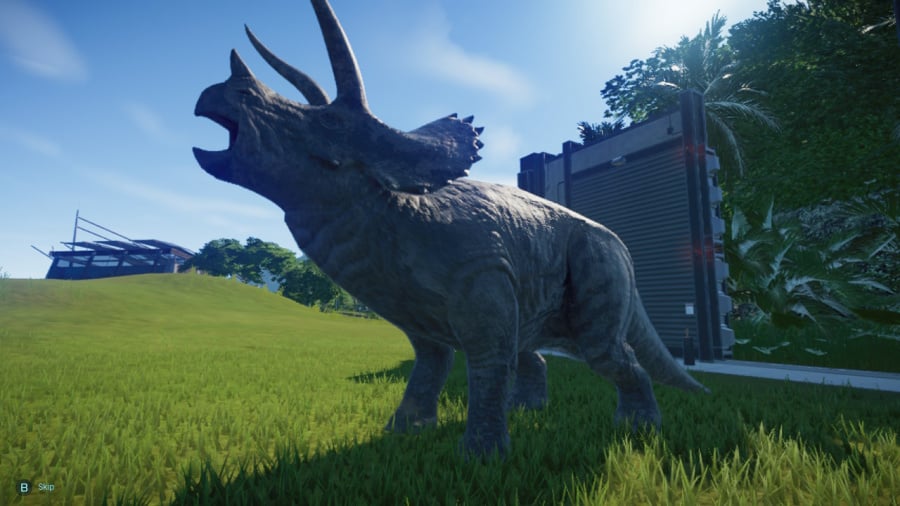 Given that Jurassic World Evolution is a game that sometimes struggles to perform perfectly on even the most mighty and powerful of home consoles and PCs, you’d be forgiven for expecting this Switch port to be nothing short of a Jurassic Park 3-level disaster. However, you would be wrong in this assumption and, as a result, must now go sit in a Portaloo and await your fate at the hands of a beast with huge teeth and tiny Donald Trump claws. While the graphics here have certainly taken a pretty big hit and handheld mode’s resolution results in a level of blur that sometimes looks as though a Dilophosaurus has spat all over your screen, this is – quite unbelievably – a perfectly playable and oftentimes very attractive version of the game. Frontier, you clever girl!

For those among you who have yet to accept the challenge of caging and controlling nature’s most powerful killers and their peace-loving, plant-eating pals in the two years since this game originally released, what we’ve got here is the usual sim management shenanigans you’ll be used to from the custodians of the Rollercoaster Tycoon series, with the added attraction of massive dinosaurs and tons of references to the entire series of Jurassic Park movies thus far.

Yes, you’ll get down to the usual business of finance management and building toilets, cafes and shops to appease every idiot who decides it’s a good idea to bring their kids along to stand and stare at an Indominus Rex who really wants to rip their tiny heads off, but here you also get to muck about with genetics, create new strains of dino, pit herbivore against carnivore, build those daft balls people can ride around the park in and cause all manner of chaos, should you wish to do so. 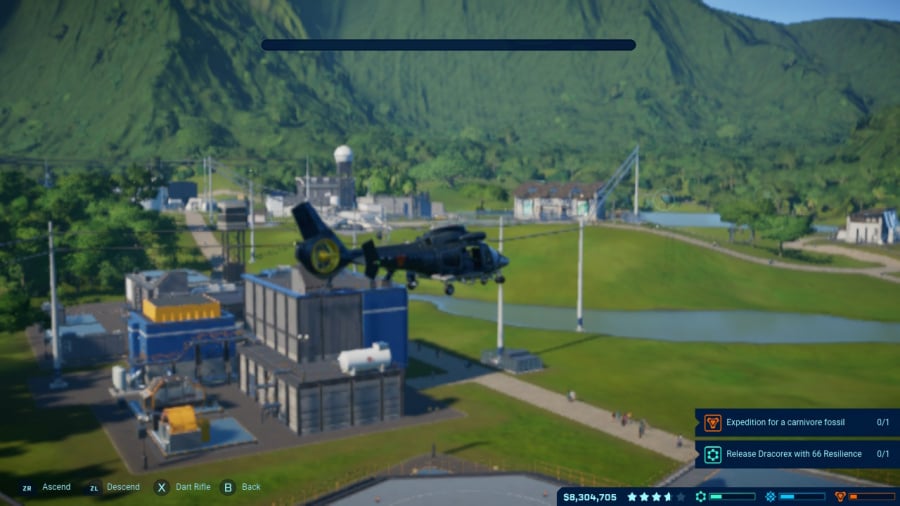 And it’s this chaos – or at least the constant threat that it’s about to emerge – that makes this such an endlessly fun game to spend time with. Fans of the films will no doubt delight in all the little details and references (Jeff Goldblum is even along for the ride here) as well as the ability to get right down to the ground level, riding around in those awesome jeeps from the original movie, switching to first-person mode to fire a medicine dart into a sick dino’s leathery neck or jumping into a helicopter to hunt down a rogue T-Rex, tranquilising it before it grabs a tourist, shakes it around and swallows it headfirst in gloriously graphic detail.

Whether your dinosaurs escape by accident, becoming unhappy with their surroundings and scaling a wall, or whether you’ve quite purposefully engineered your park in such a way that everybody is going to die horribly, when things get out of control here it’s always a good time. Crowds of punters scream and flee as beasts break out of containment and make a beeline for the gift shop, tropical storms roll in and take out the power or tear up electric fencing that’s been containing your hungry raptors… it’s all here. And responding to all of this in vehicles, with guns or by simply assigning tasks to your staff from on-high makes for a surprisingly visceral, action-packed slant to a genre that is all too often just a little bit dry. 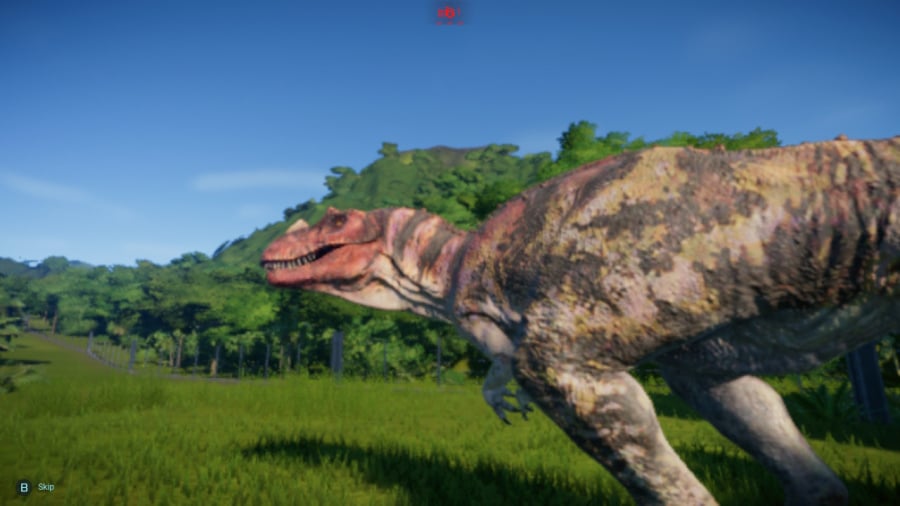 The flip side of this is that, as in-depth as Jurassic World Evolution can be with its multitude of buildings, research paths and encyclopaedia of dino-facts, it certainly isn’t a management sim that can compete with more serious examples of the genre and, as such, may put off some hardcore sim nuts. There’s a simplicity to things here that makes for a surprisingly straightforward, easy to navigate affair, something that’s helped by crisp, clear menus and systems that ensure sending out a team of palaeontologists, examining fossils for DNA and creating new strains of murder beast is every bit as simple as directing power to a hotel or laying down some nice new path to a toilet.

Over the course of the game’s meaty main campaign – a campaign that’s bolstered here by every single bit of DLC and new dinosaur that’s been added to the mix over the past two years – you’ll take control of several islands in order to expand your Jurassic empire and unlock every dino type, gadget, toy and vehicle in the game. Starting out on Isla Mantanceros, you’ll learn the ropes, getting to grips with how to evolve and release a dinosaur into its pen, provide food and comfort, monitor and act in order to keep your beasts, both human and dino, happy and so on. You’ll build tourist facilities, security measures, research buildings and monorails as well as send your teams out to dig and collect fossils across the globe that can then be sent to your labs where DNA will be extracted, unlocking new dinos with which to wow any punters that haven’t yet been wishboned by a couple of tyrannosaurs (RIP, Eddie Carr). 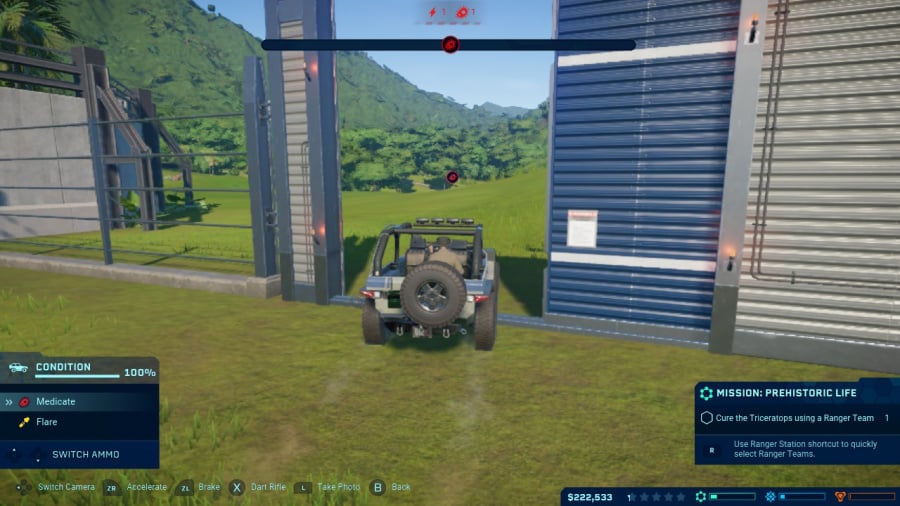 As you move on to Isla Muerta, Pena and eventually Nublar itself, the game ups the ante, putting everything you’ve learned to the test and, for a management sim game, it does all of this in an impressively engaging manner. There are three types of main mission to engage with on each island – security, entertainment and science – and, while some of the side varieties of these can be bog-standard busywork stuff, the main campaign offerings tend to come with a little bit of narrative spice that keeps things interesting and gives proceedings a nice sense of direction and purpose.

If you want to free yourself from the shackles of the main campaign or the restrictions it places upon you, you can also choose to jump into the sandbox mode and build away at your very own murder…. eh… we mean visitor park to your heart’s content. This is perhaps our favourite way to play the game as it leaves us to experiment, setting up mega battles between violent strains of alpha dino, throwing a hungry carnivore into a pen full of vegetarians and generally just rejoicing in the violence that results from messing around, prodding and poking at prehistoric death machines trapped in a park full of very silly, chewy and delicious human visitors. 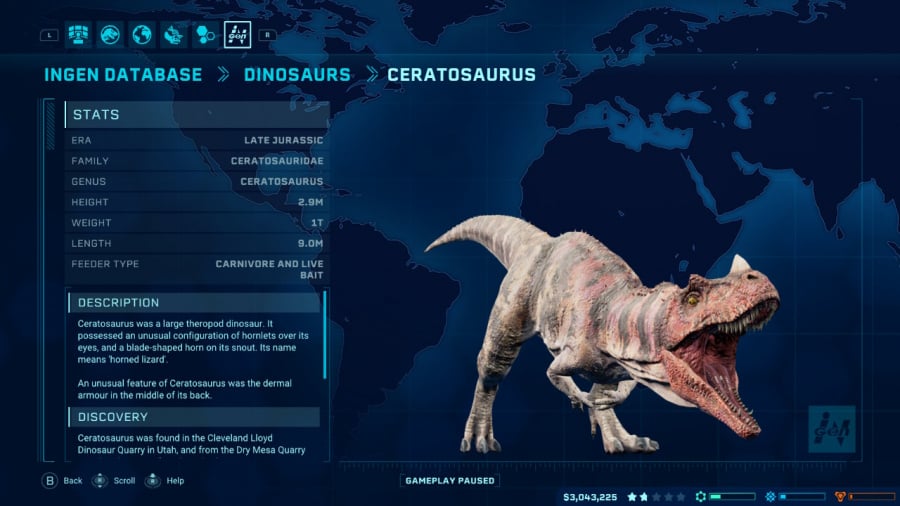 In terms of this Switch port of Jurassic World Evolution, as we’ve already mentioned, this is a surprisingly slick and eminently playable version of a huge and impressively detailed game. However, there are some problems here, the most pressing of which is handheld play. In order to get this leathery beast running in portable mode, the resolution has been dropped right down and it results in a blurry picture quality that looks quite bad in comparison to its docked counterpart. It’s still enjoyable; the framerate is solid and the UI remains thankfully crisp easy to read, but there’s no doubt the best way to experience this one is on your big TV – unless you really don’t have an option.

Thankfully, once docked, things are much easier to recommend and we were really quite surprised with just how good the game looks in this mode. There are obviously pretty drastic downgrades compared to other versions, for sure, but it still looks great, still has bags of atmosphere and those dinosaurs still look and behave fantastically. Menus, cameras and controls are all zippy and responsive and the framerate manages to do just fine most of the time – although dropping down to drive around your park and some of the huge storms found on later islands can cause things to slow down from time to time. 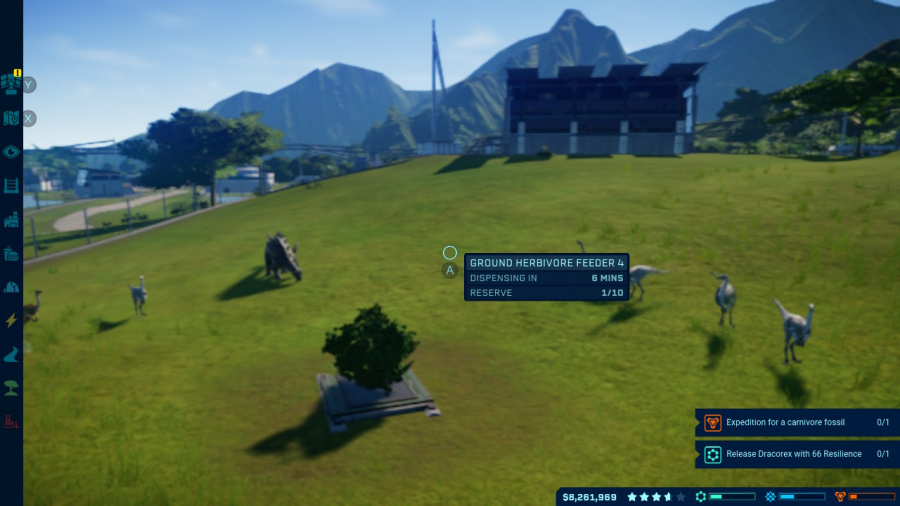 Overall, however, we’re mightily impressed with what Frontier Developments has achieved here, bringing the full-fat Jurassic World Evolution experience, complete with all its available add-ons and DLC, to Nintendo’s hybrid console in a port that plays surprisingly well. There are absolutely visual problems with handheld and a few hiccups here and there in docked, but honestly, there’s so much fun to be had moment-to-moment here that we were far too busy laughing and scheming to really let it bother us. Life really did just find a way.