You don’t need us to tell you this, but Nintendo makes some strange decisions sometimes. The latest example of this is Kirby Fighters 2, a digital-only fighting game that was stealth-dropped onto the eShop without any warning, promoted with a couple of tweets then generally abandoned (at least at the time of writing).

With behaviour like that you’d maybe expect Kirby Fighters 2 to be an absolute stinker that Nintendo is hoping nobody notices so it can bury it and move onto promoting its next big release, Pikmin 3 Deluxe. The reality, though, is very different, because this is actually a pretty fun game and one that’s well worth the £17.99 / $19.99 asking price.

The quickest way to describe Kirby Fighters 2 is that it’s what you’d get if Smash Bros. only consisted of Kirby characters and stages. In fact, If you’d told us this was originally planned to be a $20 Kirby-themed expansion pass for Smash Bros. Ultimate, we’d have believed you entirely. There are a total of 22 playable fighters, but while that initially sounds like an impressive roster, that only amounts to six different characters: 17 of them are just different Kirby abilities. 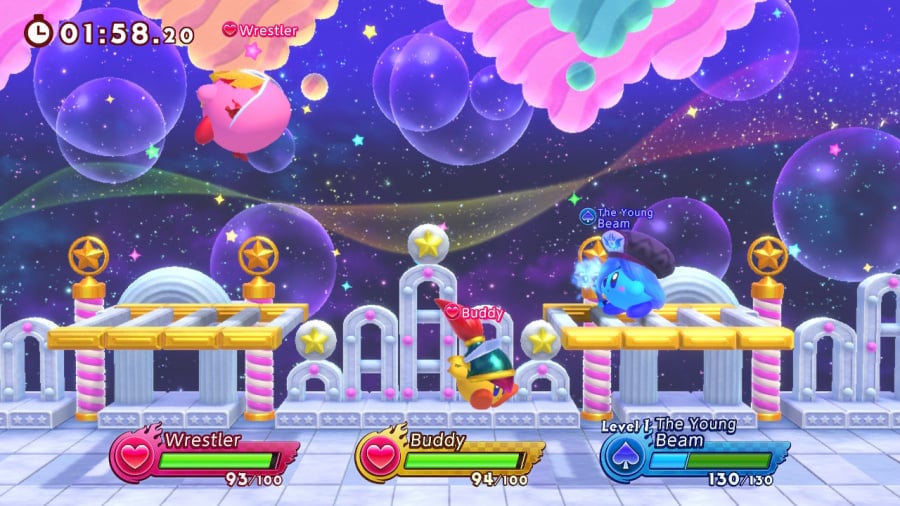 Having 17 different Kirbys (Kirbies? Who knows?) to choose from may immediately make you think Kirby Fighters 2 has all the depth of a teaspoon of water, but that isn’t actually the case. Each of the different abilities has its own unique move set, and this can result in some wildly different fighting styles.

Yo-Yo Kirby, for example, is armed with a variety of yo-yo tricks and flicks designed to keep enemies at bay, while the Sword Kirby (who still has his Link hat, thankfully) requires you to get close to an opponent before you can pull off one of his 12 different slash types. Then there’s Wrestler Kirby – marking the debut appearance of the Wrestler ability in a Kirby game – which focuses more on grabs and has a few cool combos you can pull off. The move sets are all diverse enough that it’s going to take you a long time to master them all, let alone complete Story mode with each of them (more on that in a bit). 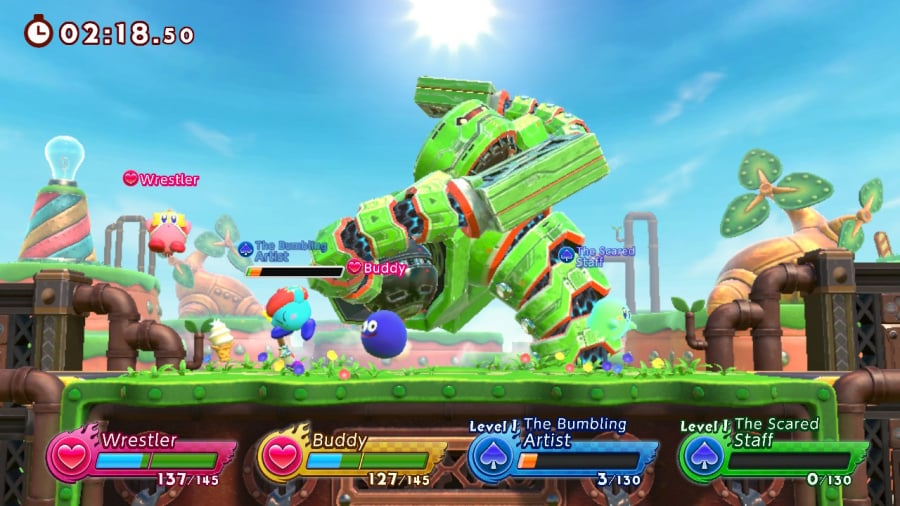 The fighter list may be visually similar throughout, but the same can’t be said of the stages: there are 19 in total and there’s a nice variety on offer here, from fairly standard battlefields to more elaborate levels with stage hazards such as big springy hands coming out of the walls, a giant robot swinging its massive fists at you or (our personal favourite) a train blasting across the screen and running the fighters over in a style very similar to the Mario Kart stage in Smash Bros.

The reason we keep mentioning Smash Bros is because this isn’t merely similar to Smash, it’s practically a legitimate spin-off. Co-developers HAL Laboratory and Vanpool have clearly been given access to some form of the Smash Bros. engine and built this game around it, because everything – from big things like the feel of the combat and the Battle mode with its four-player support, to smaller things like the scoring at the end of a fight and the menu screen – feels like a modded version of Smash (albeit an exceptionally professional one, of course).

That’s not to say it doesn’t still have its own identity, mind you, and the most obvious example of this is the Story mode, which is the main meat of the game and can potentially keep you occupied for a long time depending on how much of a completist you are. The general idea is that you pick two fighters (the second can either be an AI ‘buddy’ character or a second human player if you’d rather play co-op) and fight your way up a tower in an attempt to reach the top and fight the tag team of Meta Knight and King Dedede. 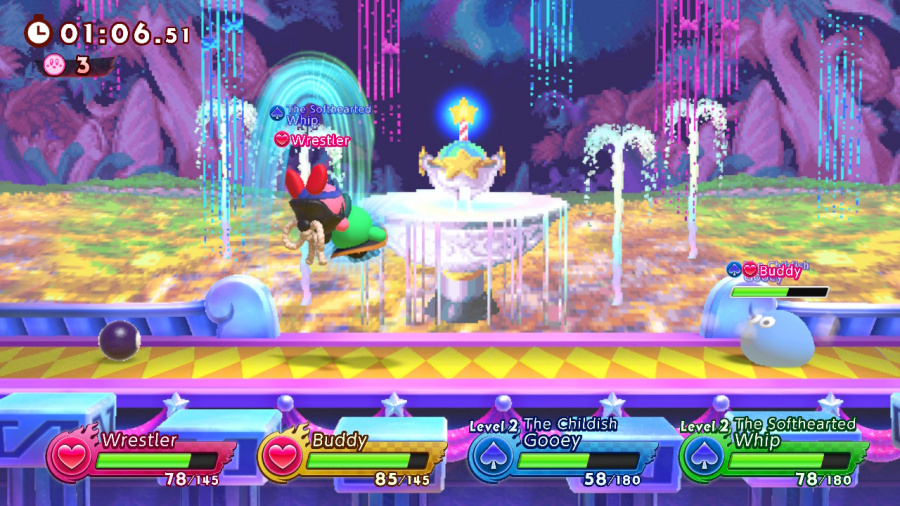 There are five different chapters in Story mode, and each has you starting the tower from the bottom and climbing it up to a certain height – 5, 10, 20, 30 and 50 floors. Each floor consists of a single battle in one of three forms: a 2-on-1 fight, a 2-on-2 fight or a boss battle. Occasionally you’ll get variations: the hazards on the stage may move at twice the speed, or the game may only spawn a certain type of weapon. Naturally, the aim is to defeat your opponent in order to reach the next floor.

What makes this mode interesting is that it isn’t just a case of ‘fight someone, beat them, rinse and repeat’ without rhyme or reason, there’s actually a heavy dose of character progression in there too that requires a combination of strategy and luck. After each stage, you recover a little bit of health (you keep the same health bar throughout) and are then presented with a screen giving you a choice between three randomly chosen items. You have to pick one of them to help improve your fighter and give you a better fighting chance of making it to the top.

There’s a wide variety of items between each stage and they all help in different ways. Some are permanent buffs that last the rest of the campaign; these could increase your attack power, improve your buddy’s AI skill level, make your charge attacks faster, increase the amount of health you get from food, that sort of thing. Others only work in specific situations: there’s a medal that makes your attacks stronger in boss fights, for example (these can be stacked, so if you struggle against bosses you’ll want to get as many as you can). There are also standard one-off food items, so if you really took a kicking in the last round you may want to just take one of those to regain your health and forfeit a more long-term stat boost in order to stay alive. 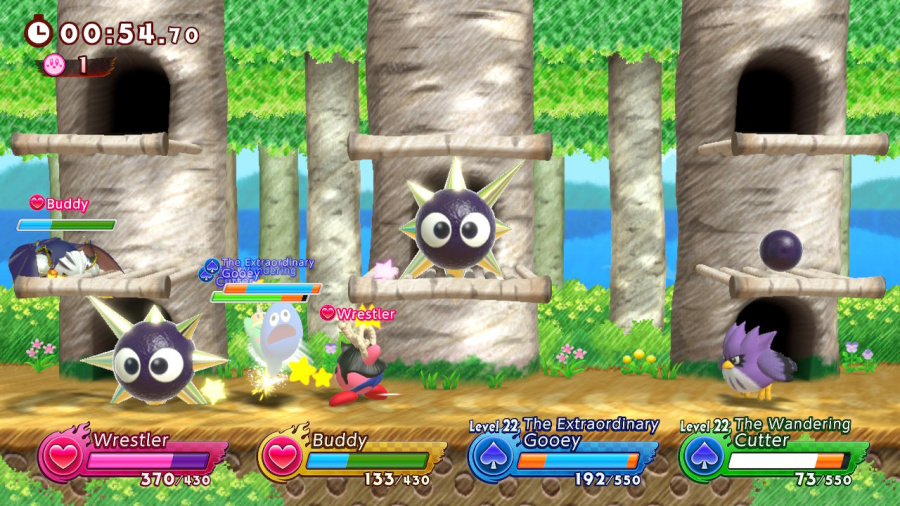 It’s a simple enough concept, then: have a fight, recover some health, pick a power-up, have another fight and so on. And yet it’s really compelling, especially once you reach the final, 50-floor tower, which can take an hour or so to beat and will require a great deal of skill, a slice of luck and some smart decision making to ensure you gather the right stat boosts early on to make things easier when you get higher up the tower and enemies get harder. While other chapters let you retry as many times as you like when you lose a stage, this final, 50-floor beat only gives you three lives so as you approach the 50th floor the level of tension is very real. It’s genuinely exciting stuff.

It’s just as well, really, because there isn’t much else beyond this mode. There’s an unlockable ‘Single-Handed mode’ where you choose only one character instead of a pair, and take on a short series of fights, but there’s really not much to it. Online multiplayer is also available, and while we didn’t have many issues with the performance once we were connected, it did take a little while to find a fight (perhaps due to the aforementioned lack of publicity). Other than that, there’s a standard Smash-style Battle mode where you have one-off fights with up to four players and that’s about it. 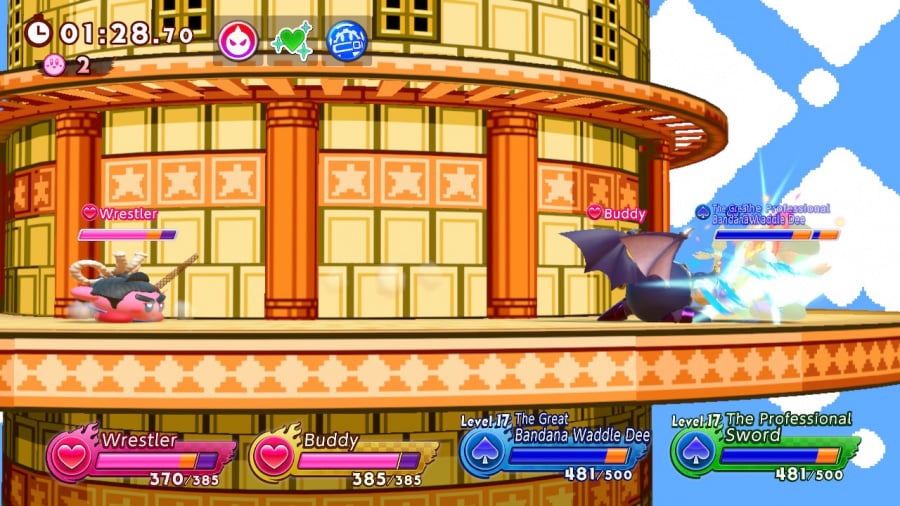 To be honest, though, that’s probably enough for the price, especially if you’re more of a single-player gamer. You get medals for each character when you finish all five Story mode towers with them, meaning if you’re the type who insists on completing games 100% it’s going to take you a hell of a long time to beat the 50-floor tower with all 22 fighters and get all their medals. An experience-style Fighter Points system will give you a reason to keep going: as you take part in fights and beat bosses you’ll level up over time and unlock new characters, stages, music tracks and ‘rare hats’ for certain characters to wear. Again, it’s nothing revolutionary, but it’s compelling nonetheless.

Kirby Fighters 2 won’t appeal to everyone, and there’s no doubt whatsoever that fans of this sort of genre should get Super Smash Bros. Ultimate instead if they don’t already. If you’ve thoroughly rinsed Smash, though, and are a Kirby fan looking for either another single-player or co-op challenge to sink your teeth into or a fun, mindless local multiplayer battle game this is a brilliant way to pass the time, especially given its low price. If only Nintendo would actually tell people.