All forms of art take inspiration from that which came before, but those that do must reflect on those forms and develop upon them to stand out. Done well, it can lead to even more interesting forms of art. Many have tried this in the Souls-like sub-genre of games, which has spewed out an increasing number of similar titles in recent years, but very few have really delivered the goods. This gameplay loop is, by now, a tried and tested delight, but it relies on the balance between risk and reward, difficulty and payout. It also revolves around absolutely nailing the combat system. In addition to this, new entries to the fold must offer something fresh. All of this, of course, is easier said than done, but developer Cold Symmetry has managed to balance this synergy well with Mortal Shell. That’s no mean feat for a studio’s debut title, albeit a team made up of AAA industry veterans.

You might not believe this at first glance. On the surface, this game looks derivative of its brethren in the extreme. The ambiance of the game is ripped straight out of Dark Souls. Early on, it’s easy to dismiss Mortal Shell, especially when the game’s NPCs begin speaking in mysterious riddles. Look beyond the similarities, however, and what we have is a game full of atmosphere. It’s haunting, eerie, dark, and foreboding. Likewise, environments are varied, some of them claustrophobic while others appear vast and overwhelming, in all the right ways. Enemies are more densely configured throughout the environment than in other titles of its ilk, with more traps. As a result, you’re forced to slow down, back up, think carefully, and chip away at the game. Aesthetically it might not be anything you haven’t seen before, but that doesn’t mean it isn’t excellent for what it offers, and it’s the moment-to-moment dance of combat where games such as this live or die. 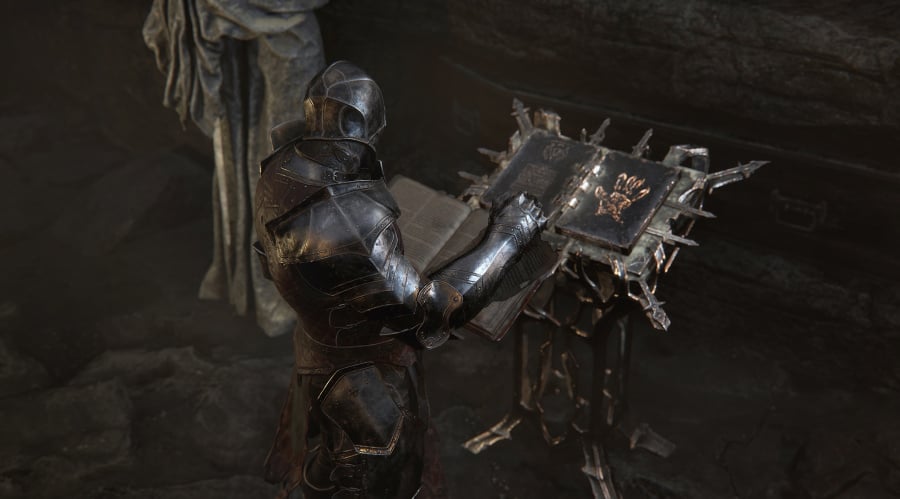 After a steep learning curve – even for veterans of the genre – the action here is weighty, deliberate, and impactful. The game absolutely nails the fundamentals of combat – the balance of swinging a blade, dodging, and parrying – and harmonises the risk taken and the potential payout should you get it right. This provides a compelling need to continue once you get into the swing of things. We say this because games like this are about as close to a rhythm title as they are an action RPG, and it’s essential to really master each of the different aspects of combat to the point that it becomes second nature, a rhythmic reaction. Yes, the basics are right, but it also brings some new ideas to the table, most notably through the game’s Shell system.

There’s no character creator here, you simply play as a husk (think opening scenes of the Ridley Scott film Prometheus) and there are no character stats to level up. Instead, you inhabit the Shells of fallen warriors, taking on their appearance along with their unique strengths, weaknesses, and abilities. They each have their own unique skill tree, from which new abilities can be purchased using Nektar (or Tar for short) and Glimpses. While Tar forms the basic currency used to purchase just about anything regardless of which Shell you inhabit, Glimpses are Shell specific, being locked to the type you’re using when you receive them. Since each Shell offers something new and excels in specific areas of the game, this forces you to switch between them often if you want to effectively level each one up. 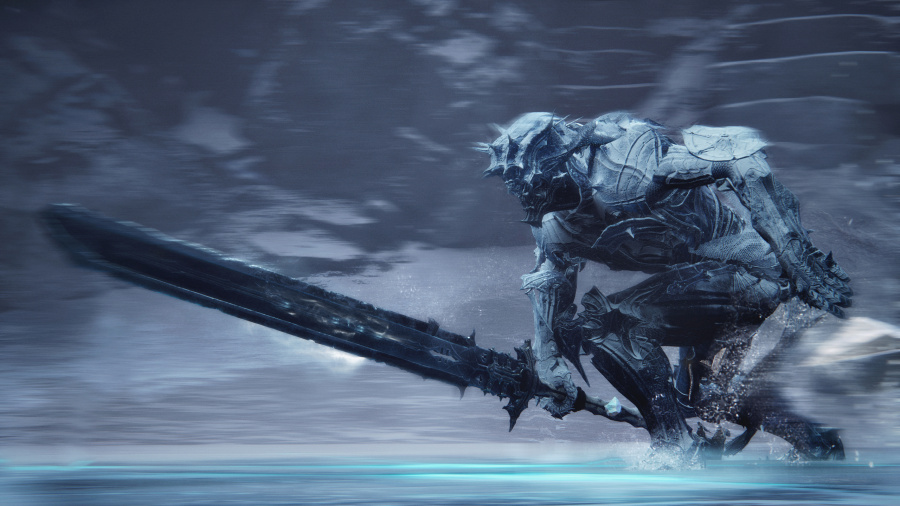 The basic core of combat remains the same between each Shell, including the weapon you wield. As a result, it feels like you’re playing a heavy strength build at all times. The differences between Shells revolve more around speed of movement, health, stamina, and resolve. A key tactic of combat revolves around your Harden ability, which essentially turns your character to stone for a single free hit at any time. This is a neat feature because it can be used even when you’re in the middle of another manoeuvre. While you can’t rely solely on Hardening, its short cooldown encourages you to use it fairly often. It can save you from mistimed swings and swarming enemies, but it’s also a key part of your attack strategy. For instance, you can jump headfirst into a strong attack, Harden midway, take a free hit, and then finish your blow, all in a single sequence. This adds a new wrinkle to combat that encourages you to be aggressive. It’s neat, if a little oddly mapped to the extremely sensitive L2 button. We had a few instances where we accidentally activated Harden by merely brushing the trigger, leaving us open to attack just when we would’ve needed it. It’s an odd sensation pressing and holding the controller’s softest button to Harden your character to stone.

This ability becomes more paramount when you realise how hard it is to heal yourself in Mortal Shell. In some instances, you can heal by parrying and counter attacking an enemy, but this leaves you open to attack should you mistime the parry window. You can also heal with items, but these are often slow, gradual healing pots so they fail to provide genuine relief mid-battle. It quickly becomes clear that, really, you just need to ensure you don’t get hit, which is much easier said than done. In the game’s defence, it does give you two chances when you die. The first time knocks you out of your Shell, providing a window in which you can return to it should you manage to do so without getting hit. If you get back, you have a fully healed character to have another go. But die another time, and it’s back to the spawning spot for you. 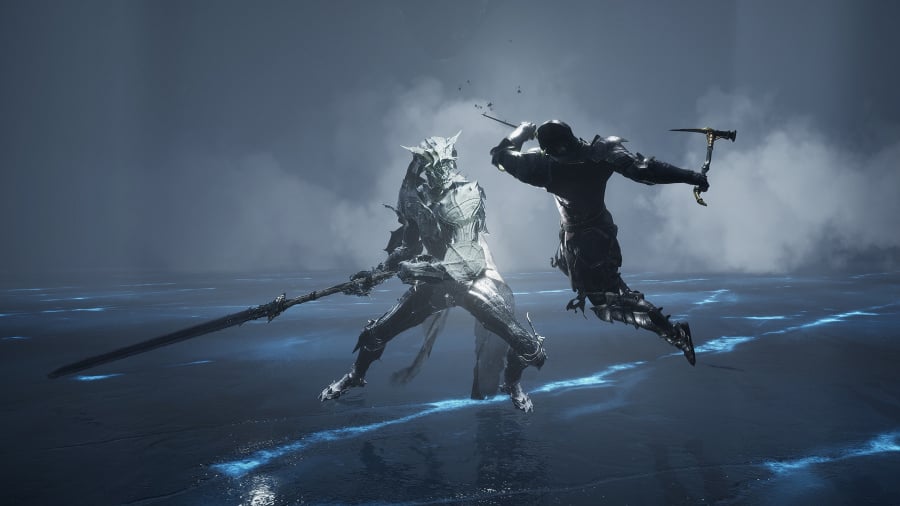 Since environments are, generally, more densely packed open hubs, this means that when you fail – and you will, often – there’s a lot of backtracking through areas you may have already traversed countless times already, all in the hope of returning to your point of demise. Even when you get good at the game, it’s hard to shake the feeling that you’re wasting time. There’s little room for error, then, and Mortal Shell can be punishingly hard. Worse still is when you die from no fault of your own. We died a few times after getting stuck on the environment, for instance, or because the camera loaded an awkward angle after finishing a preordained animation.

Yes, there are a few rough edges in this sense, but we don’t want to dwell on these relatively infrequent issues too much. The majority of the time, once you get into the rhythm of things, Mortal Shell is an absolute pleasure to play. That a smaller studio, on its debut title, can come even this close to its ancestors while bringing some genuinely interesting new ideas to the table is truly impressive. Detractors of this sub-genre are unlikely to have their minds changed here, but we think fans will lap this one up. Mortal Shell might just be the perfect stopgap to keep fans ticking along until the release of the Demon’s Souls remake.

With beautiful environments and plenty to discover, Mortal Shell is a compelling world to explore. After a steep learning curve, its combat is challenging but fascinating, and with a great sense of reward once you master it. It might be a little too similar to Dark Souls in terms of overall tone and style, but it brings enough new ideas functionally to make it stand out from the crowd. Ultimately, this is a great entry into a demanding sub-genre that fans won’t want to miss.

Train Sim World - Is It a Good Game? (Review)