Say what you will about 2K Sports, but it certainly knows how to get the most out of the Switch hardware. NBA 2K21 is the fourth of its basketball games to find its way onto Nintendo’s system, and by this point, the spectre of NBA 2K18’s botched launch is a distant memory; these days, the series looks tremendous on Switch, and 2K21 is no different.

On the court, the main difference this year is a complete overhaul of the right stick shooting system. In the past, you would shoot by either pressing the Y button or moving the right stick in a certain direction, with the tried-and-tested basketball game method of releasing the button at just the right time to determine how accurate your shot is. This year, you can still do this with some tinkering in the options menu, but the new default is a completely new method.

This time, holding down the right stick to shoot will bring up a shot meter with a little coloured target section in it. You have to gently move the stick left or right to place your cursor in the middle of this target section before the shot is released in order to throw the ball straight. If the cursor is to either side of the target, your shot will be slightly off-centre, affecting its chances of going in (depending on how far off you were, of course). Naturally, more difficult shots are trickier to line up in time. 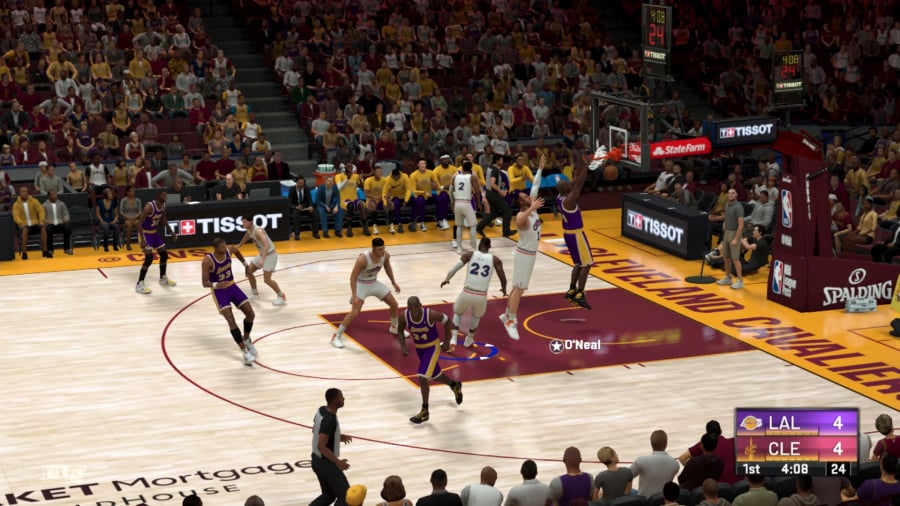 It’s an interesting new shot system but it takes a little practice to get used to, especially if you’re a long-time basketball game fan who’s potentially spent decades holding down a shot button and releasing it at the right time, and now have to adapt to a new system where you also have to worry about balance is a bit like patting your head and rubbing your belly at the same time. At least it’s better than it was at launch; following complaints that it was far too difficult to pull off an accurate shot, 2K has added an update that makes things easier in Rookie, Pro and All-Star difficulty levels. Now it’s noticeably more forgiving, but will still take some getting used to regardless – and if you really can’t get along with it, you can turn it off in the Options menu.

This new shooting system aside, the rest of the game feels much the same as last year’s effort. There have been odd tweaks here and there as is always the case with annual sports releases, but nothing quite as revolutionary as the right stick revamp. Most of the other changes, then, are in the game modes: most notably the MyPlayer story mode and the MyTeam mode (where, as ever, you create your own dream team from scratch).

The story in MyPlayer this year is more restrained than it has been in previous years and follows a more conventional path to the top. Every year your created protagonist is given a nickname and a backstory: in 2K21 you’re playing as Junior, a high school American football player who reluctantly turns to basketball despite knowing he’ll be living in the shadow of Duke, his deceased father and former basketball legend. Naturally, you can expect a lot of “that was my dad, it isn’t me” banter as well as other sports movie cliches like potentially questionable agents, love interests, pesky journalists and rival players on other teams. 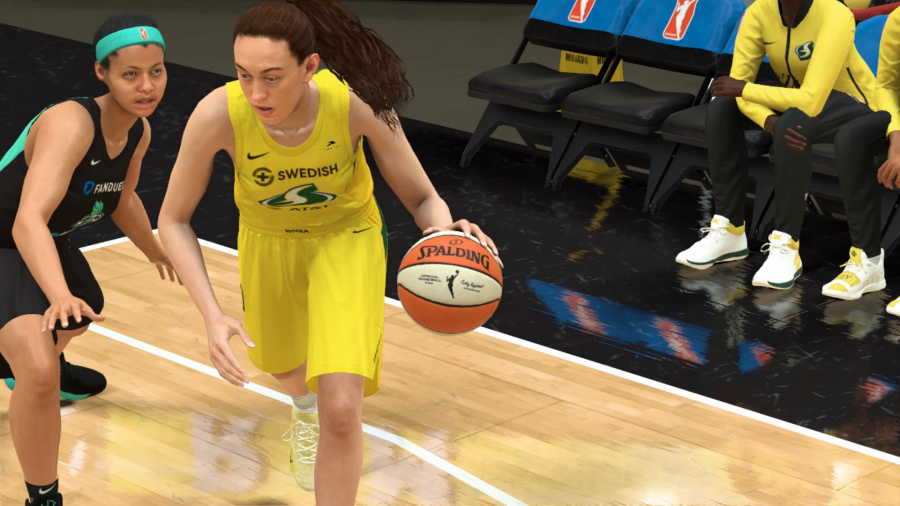 Despite being a relatively tame story, it’s one of the more engaging ones in recent years, and the acting is of a generally higher quality than what we’ve seen in some previous years. The Switch struggles a bit during the cutscenes, though; while 2K generally does a phenomenal job elsewhere in the game – on the court it’s usually a solid 30 frames per second and the level of detail is fantastic for Nintendo’s system – the MyPlayer cutscenes suffer from some severe frame rate drops and general glitching. It’s a shame because it does distract from the plot, but there you go.

In terms of progression, Junior starts off playing for his high school team, the Newark East Eagles. Games are played in gym halls with crowds of a few hundred and the commentary is provided by a suitably youthful sounding pair of presumably pimple-faced teens. Your performance in the handful of high school games you play will determine which colleges are interested in you; before long, you’ll be headed to one of ten (real-life) college teams, ranging from the likes of Michigan State and UCL to Gonzaga and Villanova. Naturally, the way you play during this college season will then have an impact on which round of the NBA draft you’re likely to be chosen in, which NBA team you may end up going to and what your likely salary per game will be. 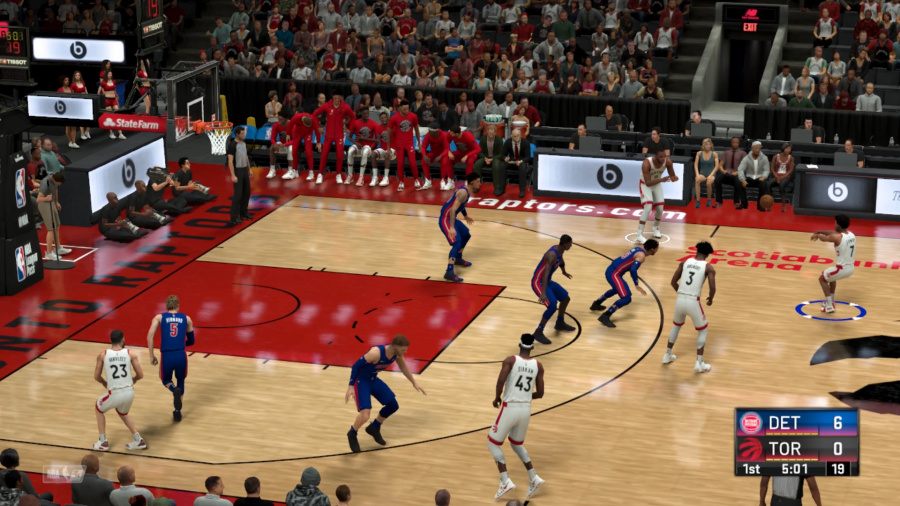 It’s this last element that’s perhaps the most crucial because as with previous MyPlayer modes in the past, there’s a heavy focus on virtual currency (VC) here. As ever, your player will start off with lousy stats and can increase them with VC; this can either be earned through in-game grinding or bought with real money. This is far from the first time 2K players have been offered this decision; you can either spend a long time slowly building your player’s stats (which is ultimately more rewarding but will take a while) or you can drop £40-50 and boost their stats to something far more impressive right away.

VC also has an impact on MyTeam, 2K21’s other big mode. If you aren’t familiar with it, it’s essentially the NBA 2K series’ version of FIFA’s Ultimate Team mode; starting off with a basic team, you play games and take on challenges to earn currency that can then be spent on random packs of player (i.e. loot boxes) or on specific players in an auction house. As in MyPlayer, you can either earn VC by playing or by just chucking your wallet at the game. VC is interchangeable between modes, too, so it’s possible to earn some playing MyPlayer and spend it on MyTeam and vice versa.

To be fair to MyTeam, it’s undergone a big transformation this year and now includes the latest gaming trend: Seasons. As in most other season-based games, this mode is now split into periods of 40+ days, during which time you can gain XP for playing certain match types and accomplishing certain requirements. Each time you pass certain XP targets you’ll hit a new level and unlock a new freebie: this could be a card pack, a power-up or something more special like a unique player. If you can reach level 40 by the end of season one, for example, you’ll get a special 96-rated reward version of Steph Curry. 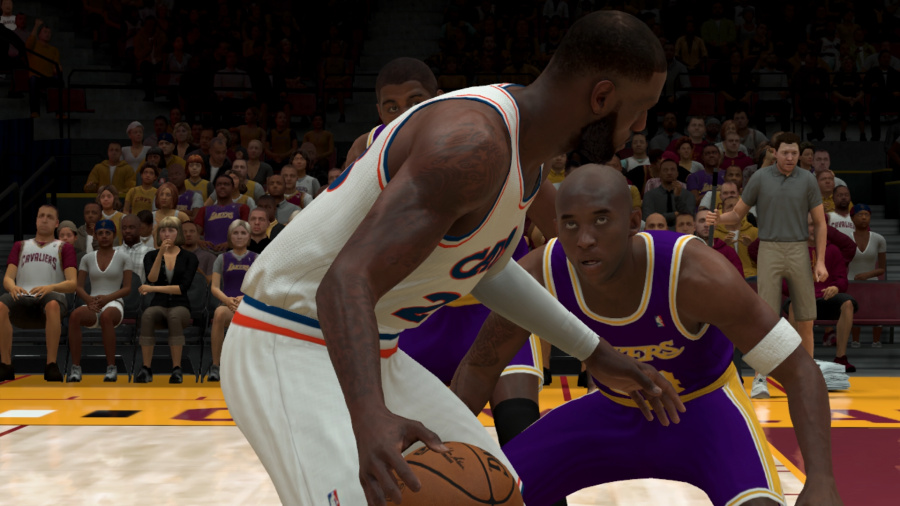 (Incidentally, FIFA 20 added a Seasons mode too, but it wasn’t on the Switch version because EA has seemingly given up supporting the system. Say what you will about 2K’s heavy-handedness when it comes to infusing microtransactions throughout its games, but at least it goes to the effort to make sure the Switch version has practically full feature parity with those on more powerful systems.)

The addition of Seasons to MyTeam makes it far less of a mindless grind because there’s always a new reward not too far away if you continue to play. Obviously, though, it also brings with it a new set of modern-day gaming problems, like the ‘FOMO’ effect; if you can’t reach level 40 by the end of the season (the first one ends sometime in mid-October) you won’t ever get that Steph Curry card. You might need a boost to get there, so hey, why not chuck a few quid at us to boost your team a bit? And so the microtransaction train continues to hurtle along.

If you’re the type of player who can happily resist the pressure of microtransactions and the somewhat grimy feeling that seeps throughout the game as a result of this, NBA 2K21 is still a fantastic basketball game. Its new shooting system will prove divisive but the fact it’s optional in most modes means it’s not a game-breaker by any means. Other than that, it’s business as usual. 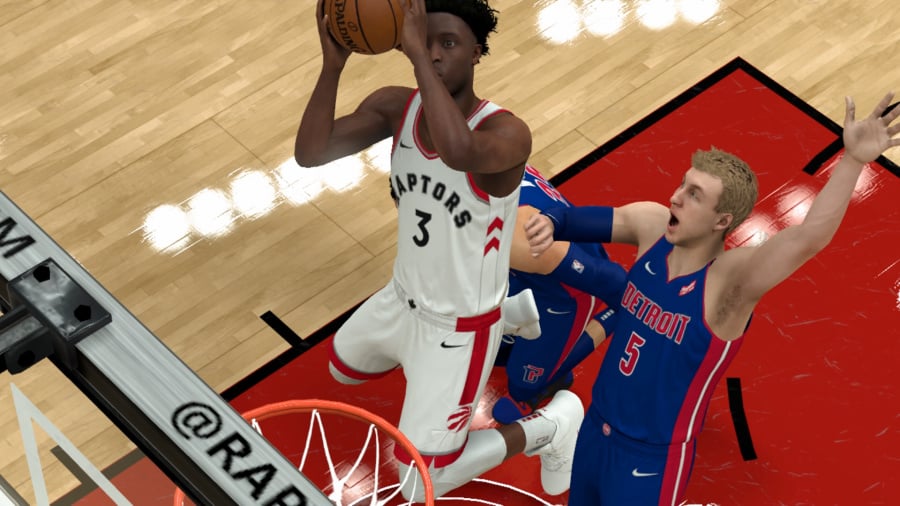 MyPlayer is still a marathon rather than a sprint: your player still takes potentially months of regular play to develop into a superstar, and it’s still greatly satisfying if you can reach that level without getting your credit card out to speed up the process. MyTeam is still an engaging mode (even more so with Seasons) that feels similarly rewarding if you can stick with it long enough to build up a team of all-stars without ever bothering your bank account. And – most importantly of all – on the court, the level of presentation, the quality of the visuals on Switch and the feel of the game, in general, are all still without equal when it comes to basketball video games.

Game review: Adoraboos is free and that’s the best thing about it

Game review: Adoraboos is free and that’s the best thing about it - Cointelegraph