OnePlus has always been very proud of the raw specs of its phones, and the OnePlus 8T is no different. The phone is better specced in almost every way than the OnePlus 8 it succeeds from earlier this year. It’s got quicker 65W fast charging, a higher 120Hz refresh rate display, a bigger 4,500mAh battery, and an extra camera.

Specs like these are important, but they rarely tell the whole story. Depending on how they’re implemented, they could only offer an incremental improvement or functionally none at all. That’s without mentioning that there are numerous elements that won’t show up on a spec sheet at all.

There are plenty of spec improvements here, but for the most part, they feel like OnePlus has played a numbers game rather than offering a radically improved device. 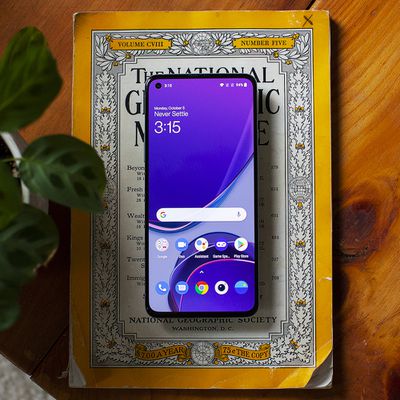 Like every other OnePlus phone, the OnePlus 8T has a big display, which measures 6.55 inches this time around. There are two main screen differences between the 8 and the 8T: one which is very obvious on the spec sheet but makes a minimal difference in day-to-day usage, and the other which is less visible but I think is a nice improvement.

The obvious spec is refresh rate, where the OnePlus 8T inherits the 120Hz refresh rate of the OnePlus 8 Pro. It sounds like a big improvement, but in practice, I found this 120Hz display didn’t feel substantially different to the 90Hz display on the OnePlus 8. Jumping from 60Hz to 90Hz felt like a revelation, 90Hz to 120Hz less so.

Less obvious from the spec sheet is that the 8T’s display is flat this time around, which means fewer accidental touches on its sides and more screen pointed directly at your face. It might make the phone look a little less premium, but I think it makes for a device that’s far more usable.

In every other measure, it’s a lovely 1080p OLED display. It’s bright, crisp, smooth, and every bit as colorful as you’d want it to be. I found I had to jump into the phone’s settings to tweak the display colors and make them a little less warm, but with that done I had zero issues. Once again, OnePlus is using an in-display fingerprint sensor, and aside from a couple of hiccups during registration (easily solved by pressing more gently on the scanner), I didn’t have any problems with it.

Flanking the 8T’s screen, you’ll find stereo speakers. One is downward firing and the other uses the phone’s earpiece. It’s great to see stereo speakers here after they were missing from the lower-tier OnePlus Nord, and their quality is otherwise on par with other handsets with this setup.

A Snapdragon 865 powers the 8T

The OnePlus 8T is powered by the same Snapdragon 865 processor as the 8 and, as mentioned above, depending on where you live you might get a choice of 8GB or 12GB of RAM and 128GB or 256GB of non-expandable storage. With 8GB of RAM, I encountered no performance hiccups, and the phone’s processor was more than fast enough to keep up with my day-to-day usage. There’s sub-6GHz 5G support but no millimeter wave, so OnePlus says if you’re on Verizon, the phone will only connect to its 4G LTE network.

Once again, there’s no IP rating for dust or water resistance for unlocked models of the 8T, though OnePlus tells me the T-Mobile version will come with an IP68 rating. However, even if your phone lacks an official water resistance rating, OnePlus says it should survive being used in wet weather. Same old OnePlus.

The OnePlus 8T’s single most impressive spec is its 65W fast charging via its Warp Charge 65 feature. In terms of numbers, that’s a massive increase over OnePlus’ previous 30W Warp Charge 30T standard, and it’s equally impressive in reality. It’s a big enough speed increase to fundamentally change how you charge the phone.

A full charge completes in 37 minutes

In practice, I found that Warp Charge 65 was fast enough to completely remove the need for me to charge the phone overnight. Just ten minutes of charge from zero restored 35 percent of the phone’s battery. Fifteen minutes gave 53 percent, 30 gave me 92, and a full charge completed in 37 minutes. It’s more than fast enough to give you a day’s worth of juice if you plug it in before a shower.

OnePlus includes a Warp Charge 65 charger with the OnePlus 8T, and you’ll have to use this charger to get those speeds. It’s also able to charge other non-OnePlus devices at up to 45W. The OnePlus 8T got a little warm to the touch while I fast charged it, but it was no worse than other fast chargers I’ve used, and OnePlus says the 8T has a host of temperature sensors to spot any heat problems before they crop up.

The OnePlus 8T’s 4,500mAh battery is technically bigger than the OnePlus 8’s, but functionally I found it offers similar battery life. Once charged, the 8T comfortably lasted through a day, and I averaged between five and six hours of screentime per charge. Most days, I had between 50 and 60 percent of battery left by the end of the evening. I’ll caveat this by saying I’m spending more time than usual at home right now, but my days still consisted of plenty of phone use, including watching YouTube videos, browsing Twitter, and chatting over Slack and WhatsApp.

All of which is to say that I think that OnePlus’s marketing claim of a day’s worth of charge in 15 minutes is accurate. I wouldn’t advise only charging the phone for 15 minutes because it’ll certainly get close to zero charge by the end of the day, but with normal use you should just about make it. Fifteen more minutes on the charger and you can have the peace of mind that it won’t die by the end of the day.

Although the OnePlus 8 Pro came with wireless charging, that’s one feature that hasn’t trickled down to the OnePlus 8T. It seems like OnePlus is content to keep it as a flagship feature, in the same year that Apple included it on the $399 iPhone SE and Google offers it on the $699 Pixel 5.

The OnePlus 8T comes with Android 11 as standard, augmented by the company’s own OxygenOS 11 software. OnePlus’ take on Android remains just as content to keep out of your way, which is just the way I like it. Android 11’s revamped media controls and conversation notification settings are all here, but its changes are incremental overall.

The OnePlus 8T’s most misleading spec increase is the amount of cameras it has. You’re getting four this time around, compared to three on the OnePlus 8. That’s a 33 percent increase, but I think the real-world benefit is far less.

The sensor itself only has a resolution of 2 megapixels, so it’s not taking black-and-white photos directly. Instead, it’s gathering extra data to feed to the main 48-megapixel camera (put your finger over the monochrome sensor while taking a black-and-white photo and the phone complains and turns the photo color without changing its framing). You access the monochrome shooting mode by scrolling right to the end of the camera’s list of filters, where it feels oddly hidden.

The black-and-white photos you can take on the OnePlus 8T look nice enough, but they’re similar to what’s possible to achieve with a software-based photo filter. Below you’ll find a comparison of exactly that. The dedicated hardware feels like an odd inclusion, and I think most people will stick with the 8T’s first two or three cameras.


OnePlus has tweaked the night mode on the 8T to come on automatically when it senses that you’re taking photographs in low light, and it helps recover some detail when you’re taking photos of more static scenes. But photos still end up looking a little warm and yellow, and although I found I could get some good shots of people at night with a little patience, it was never that reliable.

I should probably mention the macro camera’s performance, but it’s such a low-resolution sensor I didn’t get much use out of it. I got similar results by cropping a photo taken with the main camera from farther away.

Over on the video side of things, OnePlus has added a couple of new software features. A video portrait mode artificially blurs out the background of a scene while keeping your subject in focus. It does an okay job overall, minus a small amount of artifacting that cropped up around the subject’s head. The video night mode and super steady filming options both work as advertised, although unfortunately, none of the three video features work in 4K or with the phone’s selfie camera.

On paper, the OnePlus 8T looks like a bigger improvement over the OnePlus 8 than it actually is. Its extra camera feels largely unnecessary, its higher refresh rate display offers only a marginal benefit, and the update to Android 11 delivers only small tweaks to the experience. The numbers are all bigger, but the real-world improvements are incremental.

The exception to this is the OnePlus 8T’s 65W fast charging, which offers a substantial improvement over what came before. It means that, if you want, you can completely change how you charge the phone, plugging it in for a few minutes each morning rather than leaving it overnight.

Otherwise, the OnePlus 8T feels like a small update to the OnePlus 8, which itself wasn’t a huge change from the 7T the year before. They’re three great phones, but their feature sets are very similar. If you’re still using a OnePlus 7 or earlier, then the 8T’s upgrades will feel substantial, but it’s an iterative device overall and nothing that’s going to dislodge the OnePlus 8 Pro from the top of the lineup.

OnePlus has played a numbers game with the OnePlus 8T, and the result adds up to a somewhat familiar device.