The business simulation genre is one that had us hooked to our PS1 during our formative years. Despite playing best on the PC, we lost hundreds of hours huddled around a 14” CRT, building amusement resorts in Theme Park and medical complexes in Theme Hospital. Bullfrog’s slogan for these titles at the time was “big business, big fun”, and we loved the mixture of strategy, creativity, and management that they demanded.

Planet Coaster: Console Edition sees Frontier’s spiritual successor open its turnstiles to the PlayStation 5, and it feels fitting that roughly quarter of a century after those heady PS1 titles launched, we’re rigging prices and laying down log flumes on Sony’s brand spanking new hardware. This is a much prettier, much deeper incarnation of the abovementioned cult classics, but beneath its glossier exterior remains the same addictive goal: make money – and lots of it. 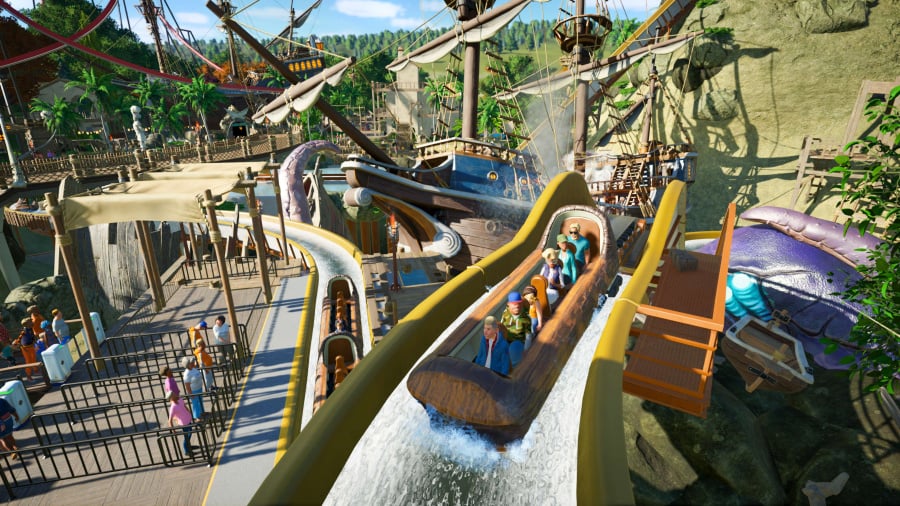 The game gives you a trio of different ways to play: Career is broken up into dozens of different scenarios, where you’ll be tasked with challenges such as clearing debt or building an eco-friendly park; Challenge is the more traditional option, where you’ll start out with limited funds and must slowly grow your empire over time; Sandbox provides you with unlimited cash, and allows you to get creative without financial encumbrance.

For many, the Career will provide the training wheels to go off and do your own thing. Here you’ll assume control of a variety of pre-built parks, each with its own story and demands. In one, for example, you’ll be tasked with resurrecting a venue’s fortunes, with big loans to repay and profits plunging. Starting a new scenario is actually really fun, as you take a bit of time to investigate what you’re working with and examine the balance sheets.

These obviously increase in difficulty over time, with each scenario including three sets of challenge criteria. Clear them all and you’ll earn a gold star, which will help to unlock even more difficult parks. It’s a fun mode that really gets you right into the thick of the action; as the venues are already largely pre-built, you’ll find yourself immediately thrust into the thick of the busy management work, but the scenarios still give you enough scope to put your fingerprints on them. 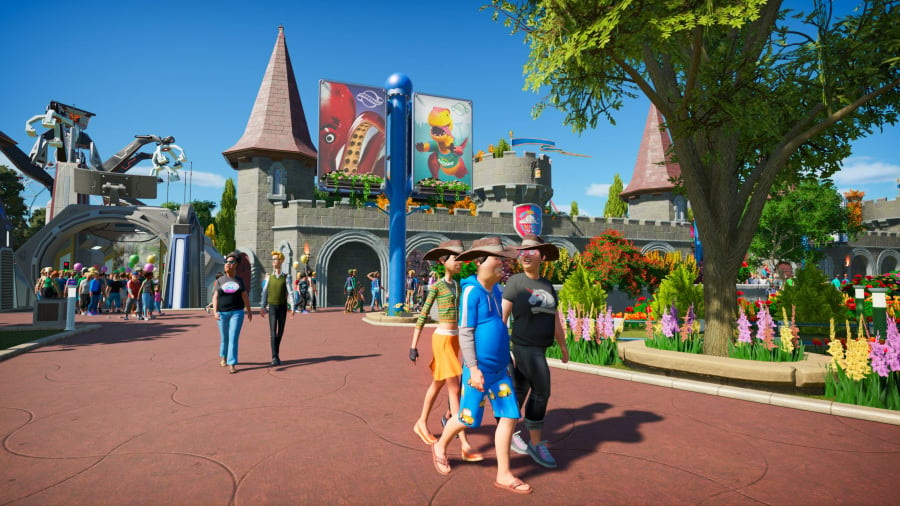 What’s also cool is that once you’ve completed a scenario, there’s no obligation to quit straight away. If you’re having fun, then you can continue to build and develop the same resort until you’re ready to move on. Our only criticism is that the voiceovers – which are mercifully sparing once you’re out of the tutorial – grate harder than a poorly-maintained coaster’s brakes. Thankfully, you can skip right through all of the dialogue and you won’t miss much.

Challenge is no doubt where you’ll spend the bulk of your time, though. Transforming a barren stretch of land into a sprawling metropolis can be supremely satisfying, especially as you’ll have to carefully balance your finances against the requirements of your guests. It’s just so much fun knowing that your quick-thinking and shrewd decisions were able to transform a single pathway with a hot dog stand into somewhere that thousands of guests want to pile into.

The title’s not without its interface struggles, though, as is standard for titles of this ilk. To be fair, the controller implementation is mostly good, but there are a few niggles. Tweaking prices – especially at food stands – is irritating, although you can synchronise all similar establishments to prevent you from getting too frustrated. Coasters, on the other hand, are an outright disaster to draw on a pad – and given how important it is to get the speed and flow of these perfect, we just gave up. 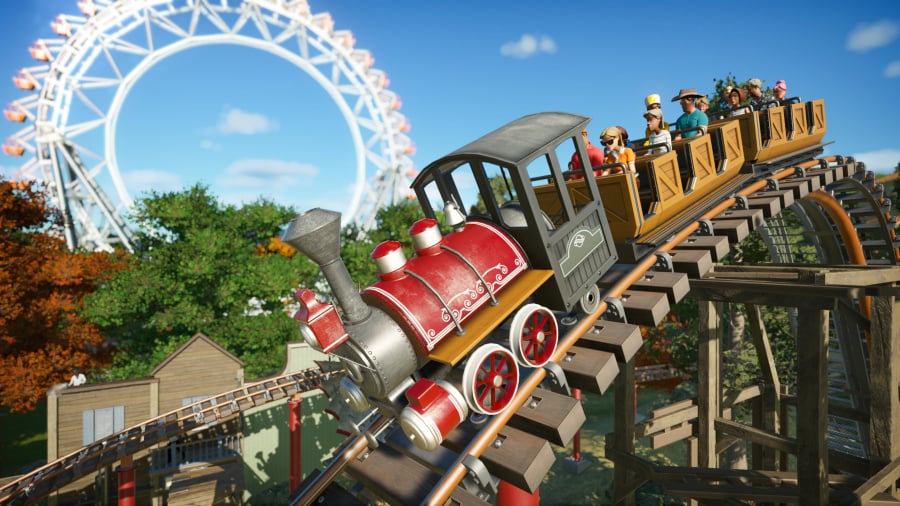 Fortunately, the game comes with a ton of pre-built coasters that you can just drop into your world, as well as support for the Frontier Workshop, which effectively allows you to download the designs of other players to add into your parks. As titles like Dreams have already proven, you simply can’t underestimate the patience of some people, and while we had a hellish time building our own coasters, we were more than satisfied with the ones we downloaded online.

In fact, the game gives you a lot of freedom to construct the kind of park that you want. While there are absolutely tons of assets available in the game, you can actually group different components together to make the look of your resort truly unique. We really appreciate the way the game has incredibly deep creativity tools for those who want them, but it also has more than enough pre-made assets for everyone else.

Perhaps the biggest downside to playing on console is that Frontier has introduced a new mechanic – the Oswald Eugene Counter to give it its full name – which effectively serves as a kind of thermometer to prevent you from crashing your system. The power of the PS5 means that you get more space to work with than the PS4 version, but there is still a firm limit. Reassuringly, we downloaded an absolutely outrageous park from the Frontier Workshop, and there was still room for us to expand it. 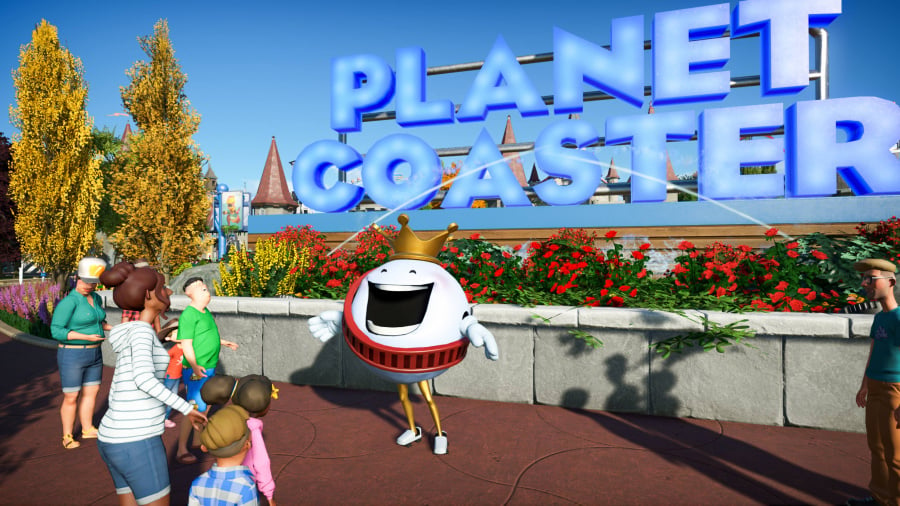 The framerate is generally a steady 60 frames-per-second, but the system was definitely beginning to strain with the resort we mentioned above. The performance overall is much better on Sony’s new console, though, as we found menus and navigation to be a teensy bit tardy on the PS4 but everything’s much more responsive on the PS5. Similarly, the visuals are sharper, rendering in a native 4K with some eye-popping HDR on display.

If you enjoy business management simulations, then we recommend purchasing a ticket for Planet Coaster: Console Edition. While the coaster creation controls can be unwieldy, Frontier’s done a generally decent job of mapping a very complicated title to the DualSense controller. The title allows for a ton of creativity, but time-strapped entrepreneurs can also have fun with the many pre-made assets available. It’s the kind of game where, once you begin building a park, you’re basically pledging the next 30 hours of your life to doing it properly – but once you start seeing those profits rolling, you may find it difficult to quit.

These Are the Most Downloaded Mobile Games Of Last Month