To say one does not come across many video games set in India and/or exploring the country’s mythology or culture, would be akin to saying there are not many female characters in Lawrence of Arabia. Technically, they are there; but playing a part of no more than that of a distant bystander here and there.

Developed by Nodding Heads Games, an independent studio based in Pune, the action-adventure-puzzle-platformer, out on Nintendo Switch as of now, not only draws heavily on the country’s ancient epics (as the name would suggest), but zealously presents its vision.

The game, which can be completed in roughly as much time as it would take one to watch Lawrence (yours truly managed it in five-ish hours), is an ambitious undertaking considering it’s the studio’s first and has not had the most straightforward development course. But as much the game promises something novel, it falters too often to be truly compelling.

One of the biggest draws of the game, even more so for non-Indian players one would assume, is its unique setting. The game revolves around Raji, the protagonist, looking for her brother Golu, who has been kidnapped by demons. In her quest, she is helped by various gods, who also double as voice-over narrators throughout the game.

The cutscene, with which the game begins, plays out (like all the subsequent ones) in the style of shadow puppetry, beautiful done, and immediately draws one into the world. When the actual game kicks off, the world is equally eye-catching. But unfortunately, the illusion is quickly broken. To start with, something one notices almost immediately, the playable character model is small to an extent where it’s almost impossible to make out any features or movements apart from all the jumping/parkouring around. The problem becomes even more pronounced whenever the camera zooms out to a greater degree. Even playing on Switch’s docked-mode does not improve the experience in any substantial manner. (In fact, I enjoyed the game much more when playing with hand-held mode.) The same is also true for all the common enemies or bosses you fight along the way. Although there is a decent variety of them and the distribution of abilities among them keeps one engaged (more on that in a bit), any cool character designs or features are overshadowed by the fact that you can’t actually make them out clearly on the screen.

The game also lives off invisible walls. One cannot take more than a few steps without running into one. Although designed to look expansive and dynamic, Raji’s world is exceptionally restricted. There will be times when you wouldn’t be able to go through an open door, climb up a surface, or jump off the edge of a building, but at the same time, you will fall off high platforms or slip into water when it suits the game. Now, this is not an issue unique to this game in particular. Invisible walls have part of the games as far as one could remember. The issue is how unnatural it feels in this one. For a game releasing in 2020, where the landscape plays a character in itself, the design comes off as poorly thought out and outdated.

Moreover, texture pop-ins are not uncommon, and their quality often match that of mobile games. Temple Run comes to mind. But if you are willing to ignore it all, the scenery on offer is captivating enough for one to push along to see more of it, with some of the best-looking levels presented at later stages of the game. Now and then, Raji even manages to offer a pleasant surprise, a visual treat if you will, even if it is without much depth. 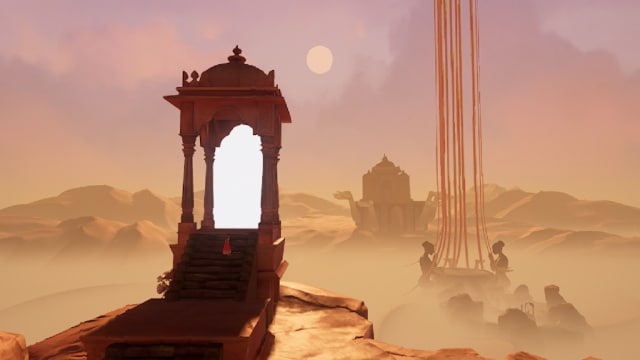 Raji, which takes up roughly 6 GB on Switch, does make up some ground when it comes to all things audio. The score, although somewhat generic at the beginning, gets better as the game progresses (as is the case with a bunch of game elements), while the voice acting is well produced. But even the best of voice actors can only do so much when they are given the blandest things to say.

The conversations between gods, which also acts at narration/exposition as previously mentioned, sound like the game giving Indian mythology lessons to 10-year-olds. This being-talked-down tone persists throughout. One can understand if the game is pandering to a foreign audience, but this approach only undermines the quality and potential of the storytelling. And then there are the random lines injected by Raji herself. Whether it is her calling after her brother or telling a demon she is not afraid, the said words come out as comic at best, cringeworthy at worst.

The issues with how the story is told are not limited to narration, though. While at the start, the names of Indian gods (and demons) and concepts like raksha bandhan are thrown around as if the game assumes the players to be already familiar with them; as the game progresses, we are introduced to a number of murals which narrate stories from Indian mythology in the same tone as mentioned above. These, along with ‘mandals‘ that recount scenes from Raji and Golu’s lives, although an interesting concept in themselves, are poorly integrated with the game’s core story and feel like an afterthought. 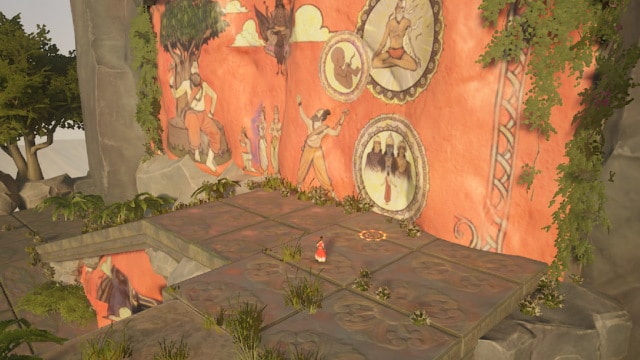 The gameplay itself, as you might have guessed by now, has its fair share of ups and downs. The combat mechanics, and the challenges presented by different class of enemies, are fun for the most parts, and help the game gloss over many of its downsides, including the extreme repetitiveness of affairs. The story, which is as bare bones as they come, barely progresses for most of the game, presenting you with a “your-princess-is-in-another-castle” scenario over and over again. What keeps one engaged then is different weapons available at different stages of the game, as well as the number of fighting skills/styles to try out (although you will not be punished too much for button-mashing). Platforming is basic and just something you need to do in order to progress. If anything, it feels a little frustrating and dated at times. The game itself runs smoothly apart from a couple of occasions where some noticeable frame drops are triggered. But then, there were the glitches. On a couple of occasions in my playthrough, Raji started floating in the air and one could have her float all over the map. On another occasion, once all the enemies were defeated in a combat area (which, like the invisible walls, are arbitrarily drawn out), neither would new ones spawn, nor could my character leave the area and progress further (restarting did the trick). At yet another instance, the character stopped jumping, using a weapon or anything else apart from running around (again, had to reboot the game). Some patches are very much due at this point.

It is indeed disappointing to see a project that presents a fascinating vision — something long-awaited, but doesn’t necessarily put in enough to back it up. There are a tonne of great ideas at work here, from the grand potential of the stories that can be explored to something as simple as the lack of a HUD or the integrated health bar around the character’s feet. And towards the end of its runtime, the game does prove that it can really step it up, showcasing how some of its more inspired choices can come together to make the whole greater than its parts. Alas, for the most part, Raji feels awkward and suffocating.

From the looks of things, there will be a sequel to the game. One can only hope that the flashes of promise will not too long in the future will be fully realised.

Tell Me Why game review: a poetic exploration of memory against a stunning Alaskan landscape