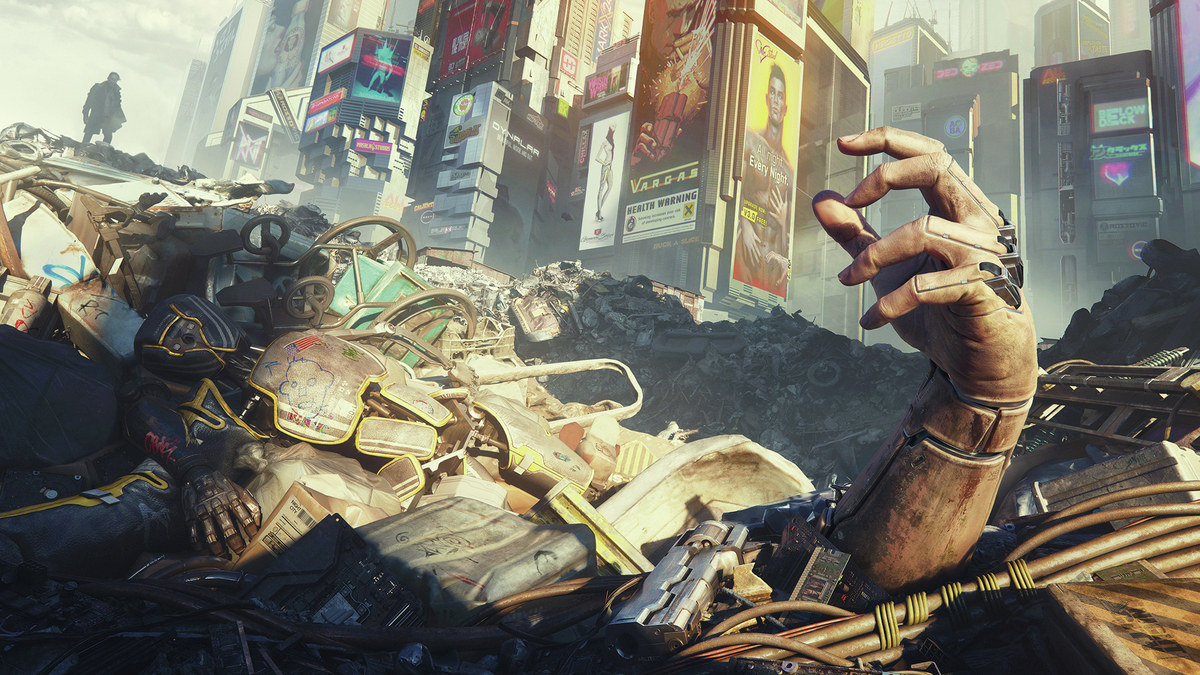 That’s what it says on my jacket. My weirdly puffy, annoyingly yellow, impressively armored and oh-so-very cyberpunk jacket. Because Cyberpunk 2077 operates almost exclusively in a claustrophobic first-person, I can’t actually see the slogan sloppily written on my super-cool popped-collar jacket except when I’m tinkering with my loadout on the inventory screen. But I know it’s there. I know it’s there all the time.

I mean, that’s part of the psychological deal we make with video games, right? We invest in the fiction that we are who we play. In this case, it’s V — the main character in CD Project Red’s massively hyped, massively disappointing open-world pantsless-motorcycle-riding-simulator. V can be anyone. They are you, whoever you want to be. They are me, every minute that I play. And they are wearing that stupid jacket with its stupid slogan which I refuse to take off and which, eventually, will become symbolic to me of everything that’s wrong with this game — everything sour and broken at the heart of it.

‘Cyberpunk 2077’ is about … nothing. There’s a plot of sorts. But it isn’t about anything.

Cyberpunk 2077 is about … nothing. There’s a plot of sorts. A kind of threaded narrative about a heist gone wrong in such a way that V ends up with Keanu Reeves permanently stuck living in his head. But it isn’t about anything. You run around collecting guns and meeting people and (mostly) killing them and (occasionally) just talking to them, and both options are terrible because the killing is almost always pointless and the talking, somehow, is even worse because the writing is so, so bad.

Keanu Reeves plays a character called Johnny Silverhand, a rockerboy from 50 years back in the game’s timeline who — for only the most vaguely defined or defended reasons — nuked the headquarters of one of the biggest corporations in Night City and killed thousands of people. Like actually blew it up with a nuclear weapon. Johnny Silverhand is a full-on terrorist, but he’s the good guy in this story. Kinda. Because, you know …

Because of what my jacket says. Because in the Cyberpunk universe, corporations are bad and corporate elitism is the dominant evil and the rape-and-pillage corpo culture is what has brought the world to the state that it is in where V — my V and your V — lives as a street-level mercenary, selling his or her gun hand, cybernetic implants and abject lack of personality to anyone who’ll pay. V dreams of someday becoming the best merc in the city. Of being remembered, like Johnny Silverhand is remembered, for, ostensibly, burning corpo sh**.

And that’s all. That’s the game’s entire underlying rationale and animating ethos summed up in three words Sharpie’d onto an ugly jacket that I wear long past its point of in-game usefulness because it is such a perfect example of everything that is wrong with the game — everything cheap and shallow and thoughtless and vain.

There are other problems, to be sure. Serious ones. Cyberpunk 2077 was supposed to be the biggest game of the year. A decade in development, years of hype, a breathless final run-up to launch day, launch hour and launch minute — this was it. The One. Greatest thing since the last great thing.

And if you care at all about video games, you already know what happened next. The game was a mess. On next-gen consoles and high-powered gaming PCs, it’s kind of a mess — a beautiful, glossy, immersive mess, but still a mess — and on last-gen systems (PS4 and Xbox One), it’s a complete, irredeemable, janky, low-rent, almost laughable mess. It glitches, it crashes, it chugs and strains to operate at even a basic level. Textures are muddy, blurred or lost in stuttering pop-in. Look fast, uncritically, and it almost seems like you’re wandering through a real sci-fi city with its soaring architecture and grubby alleys, but linger even briefly and you notice how lo-fi, flat and pixelated everything looks.

These technical issues got CP2077 pulled from the Playstation Store late last week. CDPR has already begun offering refunds for gamers who felt cheated by the divide between what they were promised and what was ultimately delivered. It has been a complete disaster for everyone involved — a team that was already dealing with disasters over crunch, release delays, trans representation and a dozen other things.

It’s like an Eat The Rich t-shirt with the Hot Topic price tag still on it; like Starbucks selling lattes in decorative All War Is Class War mugs.

But the jacket and its stupid slogan is a fishhook. It sticks in me and I can’t get it out. Its clunky wording, bumper-sticker shallowness and unearned patina of faux-outrage is like a distillation of everything wrong with the game. It’s like an Eat The Rich t-shirt with the Hot Topic price tag still on it; like Starbucks selling lattes in decorative All War Is Class War mugs. It’s evidence that the team at CDPR either had no idea how to handle the source material they were given, or didn’t care to think beyond it.

Fact: I played Cyberpunk back in the early 90’s when it was just a tabletop RPG inspired by Blade Runner and William Gibson’s sprawl stories. It was a product of its time, existing in a universe with space stations and cyberarms, but without cellphones. The way we played it — the way my teenage friends and I read ourselves into the world — was as small-time operators, always. The corporations were behemoths, the system so massively corrupt and powerful that no one could win against it. You fought to survive around the edges of it, living off the scraps. “High stakes, low impact” — that was our house rule. Because punks don’t save the world. Ever. They just try to live another day.

But CP2077 doesn’t work that way. Worlds and fortunes hang in the balance of everything V does. He (I played him as a man, though there are options) rubs shoulders with corporate titans and goes to space. The V of the main plot is different than the V of the side content, no matter how you play it. Moment to moment, he’s streetracing, fighting gangsters, solving crimes, shooting up brothels or chasing down missing cabs for a self-driving car company. His core motivation, reinforced early and often, is to be the best killer Night City has ever seen. The best merc. The most dependable. Whatever. What he truly wants is simply to be remembered. In a future where absolutely everything is disposable, V just wants to leave an indelible mark.

And really, that’s not bad. You could build an interesting character and a moving story around that. It’s something, right?

But to do so, the game would have to address two issues, both intertwined. First, there’s the bonkers assumption that the only way to make a mark in this world is to be a really good killer. Second, that this world is bad enough that it makes the first conjecture seem reasonable. And in order for there to be any story at all, the game must interrogate one or the other — either V’s motivations or the world’s death wish — and then come to some sort of conclusion.

And that’s where CP2077 fails. It does neither. It seems to believe that presentation is enough. Like, here’s V. He wants to be very good at a job that mostly involves shooting people at the behest of cops and/or corporations. And now there’s a rockstar/terrorist from 50 years ago living in his head. Isn’t that a crazy world? Okay, now let’s go blow some stuff up.

And even though V is ostensibly going through the motions of trying to get Johnny Silverhand out of his head before he dies of terminal Keanu poisoning (or something else equally ludicrous), V spends a lot of his time in Night City just capping people on the streets for a $10 payout from the cops or watching corporate soldiers gun down striking workers. There are nice moments in the game, sure. Any time I spent with Takemura (a disgraced ex-bodyguard vital to the main plot) was a pleasure. Judy is a badass. Playing around with hacking and braindance editing was fun. And there were views in Night City which were stunningly lovely. But I spent far more time as V working with various cops and corporations than I did burning any of their sh**.

You wanna stick it to the mega-corps and hit ’em where it really hurts, choom? Just turn the game off and walk away.

The game tries so hard to be cool — to come off as crass and edgy, to talk tough and play like some kind of anti-capitalist anarchy generator. But you lean too hard into that act and it will always come off more like a desperate pose than anything honest. One of the reasons I think I had so much trouble getting into the game is that all the gloss and chrome and affected, fake punkery gelled together like a hard shell in the first hours. No matter what I did, I just kept bouncing off, unable to get past the surface of it, told to act punk and do whatever I wanted, but then offered only a narrow spread of pre-approved systemic options that usually broke down to a) shoot everyone, b) have sex with a robot, c) buy things, d) quit.

I hung with it, but honestly? Quitting is the most punk option of them all. I wanted to love this game. I really did. I’ve been waiting decades for someone to take my teenage techno-dystopian fantasies and turn them into something I could play around in. But names and labels aside, this ain’t that. It’s all surface, no depth. All signal, no content. You wanna stick it to the mega-corps and hit ’em where it really hurts, choom? Just turn the game off and walk away. You wanna burn it all down?

You do that by refusing to play.

Jason Sheehan knows stuff about food, video games, books and Starblazers. He is currently the restaurant critic at Philadelphia magazine, but when no one is looking, he spends his time writing books about giant robots and ray guns. Tales From the Radiation Age is his latest book.

‘Persona 5 Strikers’ is the wildest Musou game in years

‘Persona 5 Strikers’ is the wildest Musou game in years