Did you know that rollercoasters were originally invented, in their American form at least, as an attempt to rid the country of sin? Apparently LaMarcus Thompson, the “Father of the American Rollercoaster”, was so sick of the disgraceful antics of his fellow citizens that he got to work building the Switchback Gravity Railway on Coney Island in an attempt to distract folk from their satanic ways. They were, in a way, (and yes, we’re really stretching this) his flock, the amusement park his very own church. In Rollercoaster Tycoon 3: Complete Edition, you get the chance to replace Thompson, one hundred-and-one years after his death, as the high priest of all things theme park. You’ll tend to your congregation of sinful peeps, purifying their tainted souls by having them puke $3 hotdogs through their noses while being shot through a loop at 149mph and praying for their lives as they dangle upside down on the broken Rolling Thunder you forgot to assign an engineer to. What glorious work you’re doing. 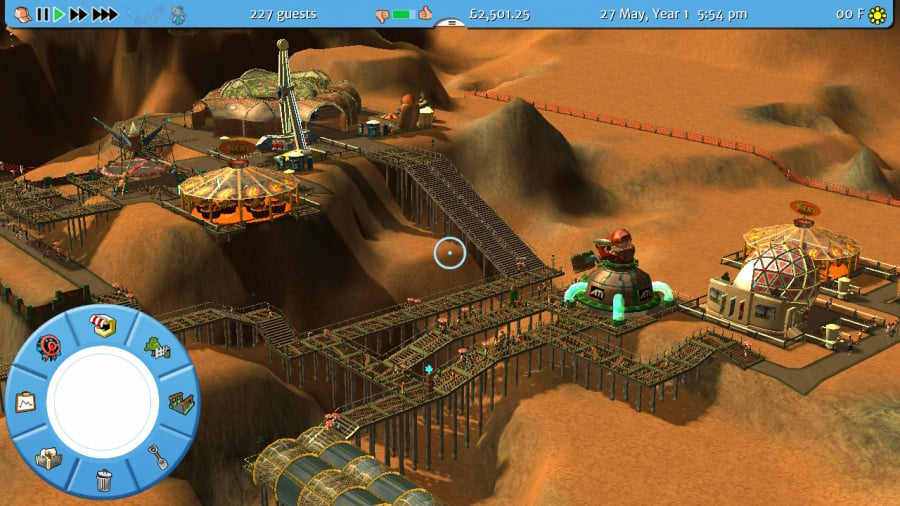 Rollercoaster Tycoon 3 has been riding the rails since way back in 2004, a wonderfully colourful and silly, but also satisfyingly in-depth sim game that was the very first in the long-running series to have its theme parks represented in three whole dimensions – you can even jump aboard your elaborate creations for a terrifying spin from a first-person perspective, if you’re brave enough.

The aim of the game here is a simple one: create amusement parks that please visiting hordes of peeps and make you a ton of sweet moolah so you can keep expanding, adding facilities and building monstrous rollercoasters that strike a balance between being terrifying enough to thrill but not so dangerous that punters end up covered in their lunch or buried headfirst in the surrounding terrain. There’s a generous career mode included, with the base game providing eighteen themed scenarios for you to undertake, from creating and maintaining a good old-fashioned American theme park to building wild rides all over Area 51. 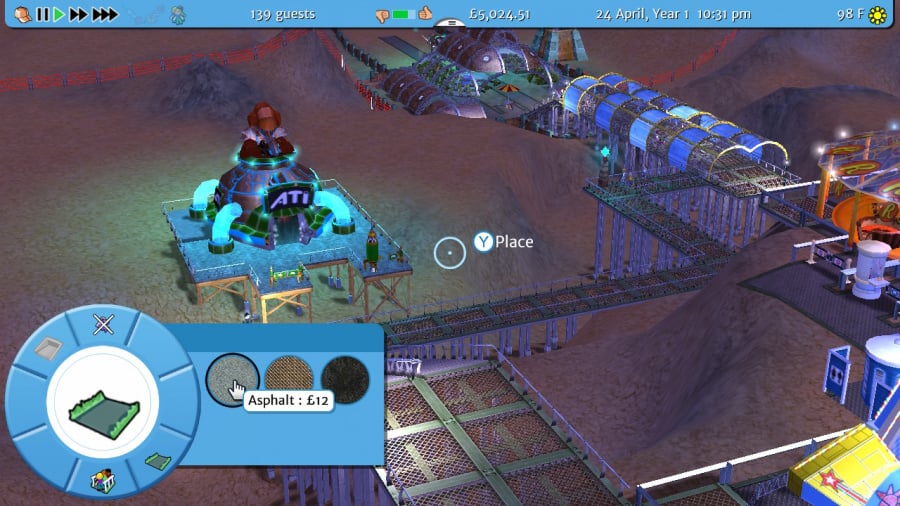 Each level tasks you with fulfilling various objectives at novice, entrepreneur and tycoon difficulty, becoming increasingly more complex as they go – however, thankfully, just hitting those novice targets is enough to unlock the next campaign scenario, so you shouldn’t get bogged down or stuck at any point. This complete edition also comes with the game’s two excellent DLC offerings, “Soaked” and “Wild”, which add a further twenty-one scenarios to the action between them.

Getting to grips with Rollercoaster Tycoon 3: Complete Edition can be a little daunting starting out; there’s certainly plenty to get your head around being in charge of your very own theme park, but the game does an excellent job of slowly immersing you in its various mechanics and there’s an extensive tutorial section available to jump into at any time to get the low-down on any aspect of proceedings you may be having trouble with. Before long, you’ll be tracking and monitoring ride popularity and gate numbers, raising and lowering prices as you go, hiring and firing staff, sticking bins and benches everywhere you can fit them and saving up your coins to build the rollercoaster of your dreams – that one big bad that’ll bring all the peeps to your yard. 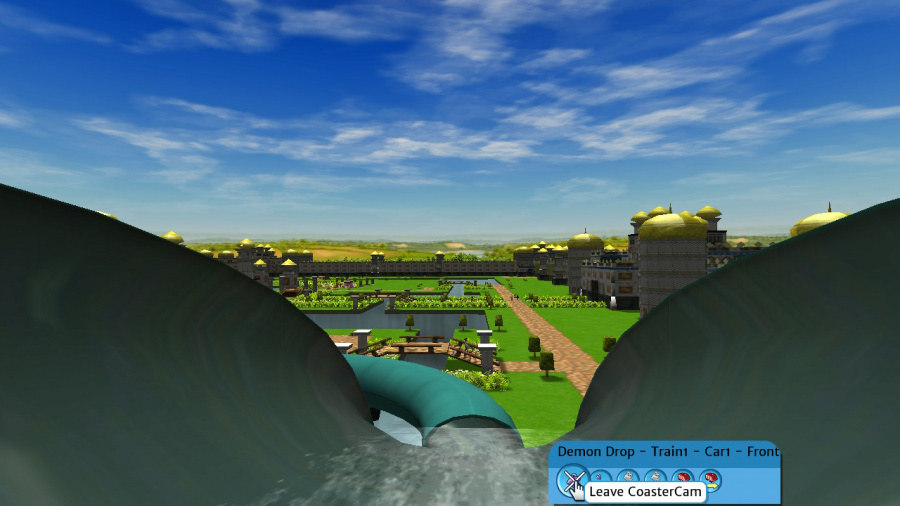 Although Rollercoaster Tycoon 3 does allow you to simply purchase pre-made coasters – among the plethora of other amusement types available – and these are something you should probably consider availing of in the early days of your career, the real meat here, the thing that keeps us coming back for more, is the surprisingly deep and endlessly fun construction elements. Building your own rides in this game is as involving and time-consuming as you want it to be, with lots of variables to take into account as you go.

Besides monetary restrictions – something you can side-line as you learn by jumping into the game’s sandbox mode and building as big and wild as you like at zero cost – you’ll need to consider and juggle all-manner of safety and psychological aspects before jumping aboard and testing out your creations from a first-person perspective. It’s at this exact point, with a cold steel track stretched ominously ahead of you, that you’ll begin to question whether you’ve added enough chain track to pull your carriage to the top of the ludicrously steep hill you’ve included, and whether or not there’s enough straight track after the enormous speeding drop on the other side to enable you to take that steep looping corner without plummeting to the ground below. It takes a while to get to grips with the ins and out of things; we found ourselves re-running tests several times to get our creations safe for public use, but in no time you’ll be banging out bad-boys that send the pulses of your peeps into overdrive and get those all-important gate receipts rolling in. 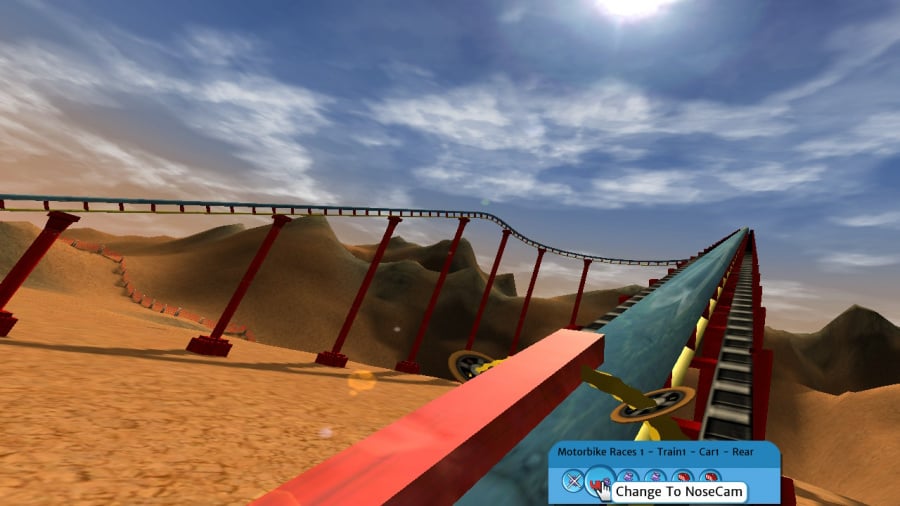 Of course, being the minister of your very own church of cool coasters also involves tending to more mundane aspects of daily life, and you’ll need to keep an eye on how visiting peeps regard your park – by simply clicking on any one of thousands milling around and reading their thoughts – and making adjustments to keep them placated. Are their enough toilets? Do you have the requisite number of janitors and engineers to keep things ship-shape and are they happy with their wages? Have you taken out a newspaper advert or put discount vouchers in the latest issue of the local college magazine? Should you fire that one lazy popcorn vendor? There’s a laundry list of things to think about here, but the game always does a clear and concise job of alerting you to problems and enabling you to fix them quickly (at least on earlier scenarios) through easy-to-parse menus and controls that do a great job of keeping things simple.

In fact, in terms of the controls, we’ve been very pleasantly surprised by how things have been adapted here for Switch. There may be no touchscreen controls but, to be honest, the game doesn’t need them as the two radial menus – one at each side of the bottom of your screen – do a perfect job of giving you access to everything you need by simply holding in either the left or right shoulder button and selecting where you need to be with either of the thumbsticks.

The camera is rotated, moved and zoomed in and out via a combination of the thumbsticks and ZL and ZR buttons, and further options can be accessed by holding down the back button to jump to a menu at the top of the screen. You can even go old school and enable a free cursor controlled with the right stick by clicking in the very same stick, which we found to be mega-handy in a few select instances. Having played the game over the years on various platforms it really was the control aspect of things we were most concerned with here, but Nvizzio Creations has done a bang-up job in ensuring everything is perfectly accessible and easy to get to grips with. 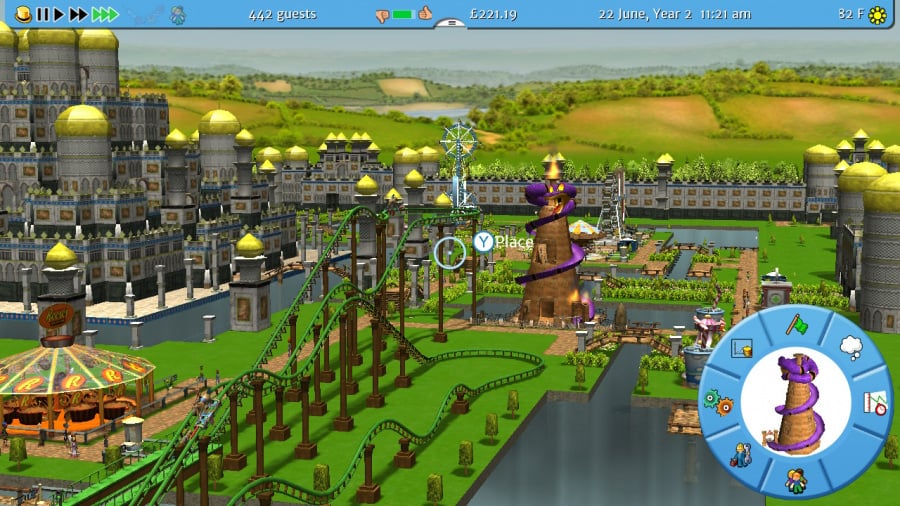 In terms of performance, this is a pretty old game that doesn’t tax the Switch too much in either docked or handheld modes. However, much like previous versions on other platforms, there can be some issues with some slight stuttering on occasion when your parks begin to get properly big and busy. It’s certainly not enough to detract from the fun, but it’s worth noting as an issue that does still exist in this new release.

Graphically, there’s been a HD overhaul here, but certainly not a full remaster or anything of that sort – this still looks like a 2004 game in many ways, especially when staring into the maw of a terrified peep – but it’s a pleasingly colourful affair and the various themes and scenarios that you’ll encounter throughout the meaty campaign and DLC all look pretty good. Water effects are reasonably impressive, there’s a nice day and night cycle, fireworks displays look suitably spectacular and speeding around your coasters in first-person is as delightful now as it was back when this game was considered fairly cutting edge stuff. 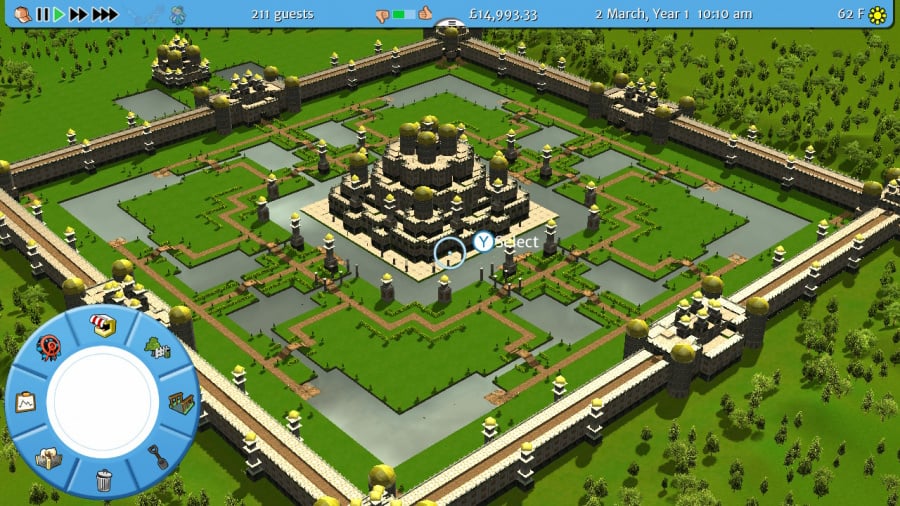 With regards to negatives, well, things can be a little finicky here and there; as with any sim-typed game, it took us quite a while to get a handle on building steep steps up to complex constructions that towered above our parks and the mechanics of water-based rides aren’t initially very well explained – the expansive tutorial section does help in this regard.

However, overall, Rollercoaster Tycoon 3: Complete Edition on Switch feels like a success, a big and generous package – especially at the very reasonable price-point – that’s stuffed to the gills with theme park fun and features a surprisingly well-implemented control scheme that makes playing in both docked and handheld modes a joy. We found ourselves getting fully lost in building coasters and maintaining our parks in this one, adding little bespoke touches and flourishes here and there as we played through for review, and you should absolutely prepare to lose dozens of hours as you diligently watch over and tend to your park and the great sea of sinful peeps who visit.