RPG Maker MV on Switch is a bit of a different prospect than its massively popular PC counterpart. This, much like the 3DS version which released back in 2017, is a more console-friendly version that strips away some important aspects which avid users of the software may consider essential. There are no plugins here to make life easier or introduce streamlined ways of going about your creative business, no way to freely integrate your own custom music, sprites or other graphical elements and no option to export and sell your elaborate creations once you’re done. This is a much more contained and restricted beast. However, if you can make peace with these exclusions and get to grips with a UI that’s certainly slower and more clumsy than on PC, you’ll find a game that provides for unlimited creative pleasure within its console-specific confines.

Getting stuck into RPG Maker MV as a newbie the first thing you’ll have to contend with is a pretty serious lack of hand-holding. There is a tutorial here that walks you through a few basics upon first launching into the game, but it really does feel as though it’s in a huge hurry to push you out the door and into the program proper as soon as it possibly can. What’s offered here feels like the bare minimum in terms of direction and you’d better pay very close attention because there’s no way – at least we couldn’t find one – to return to this tutorial once it’s done and the game has no help section to speak of. In one way, this is a disappointment; we’d love to have had a lot more of the in-and-outs explained to us, but, in another, it’s a grounding dose of reality for anyone who’s genuinely planning on spending time creating the RPG of their dreams. You’re going to have to put in the hard graft with this one, and there’s no way around it. 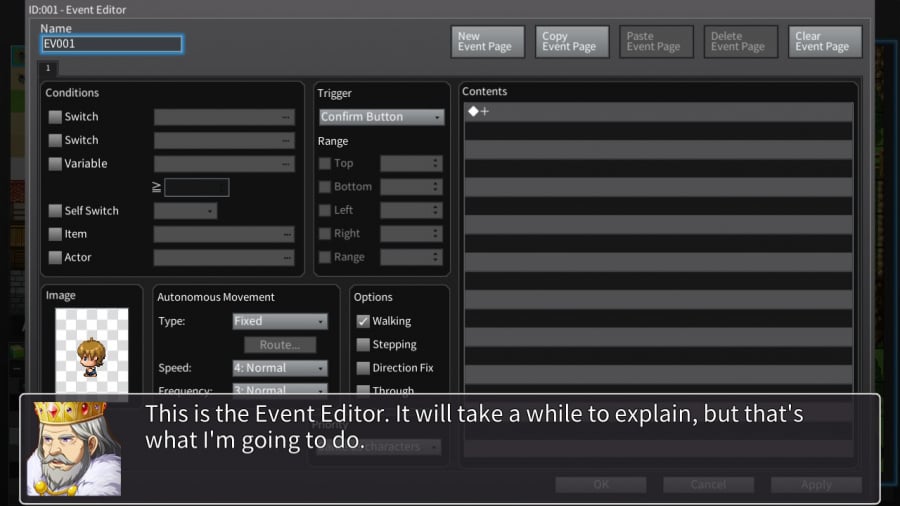 However, what the tutorial does cover before making its quick exit should at least give you a rough feel for how you’ll go about working with this pretty exhaustive RPG building tool. You’ll learn how to toggle through the various menus that make up the main areas in which you’ll spend the bulk of your time before being presented with a little 16-bit character stood in a field who needs to complete a simple fetch quest. In order to complete this quest, you’ll be charged with creating trigger points that enable your character to move from their current location to another area.

You’ll be tasked with adding some scenery to a map, giving an NPC character a simple movement ruleset and dialogue as well as defining an enemy’s health and attack parameters in a quick turn-based battle scenario. You’ll also be introduced to the game’s layering system that divides elements of scenery into separate sections that sit on top of one another as you build your game’s environments. It may sound like plenty, but it’s all over before you know it, and there’s absolutely no doubt that if you’re in this one for the long haul you’ll need to avail of the RPG Maker MV forums, enthusiast sites and the myriad YouTube tutorials and help guides that will no doubt spring up in the days and weeks following release. 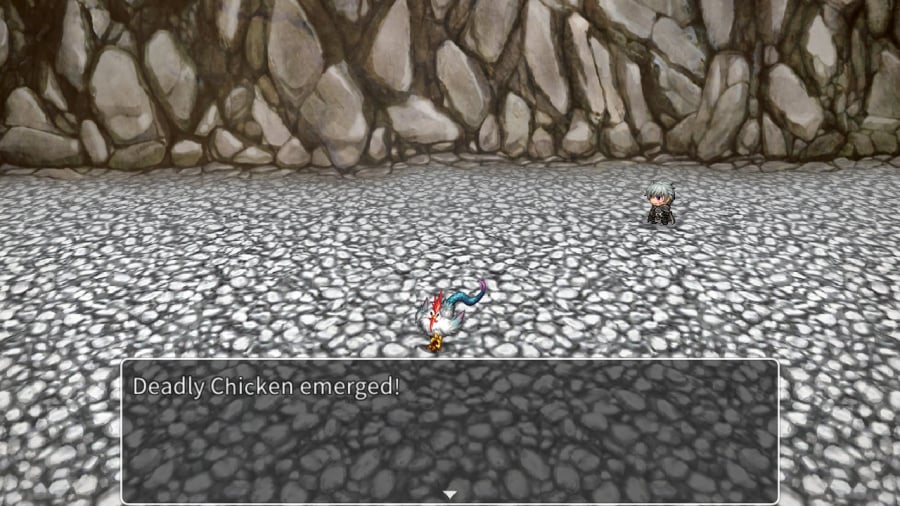 Another key aspect in getting to grips with the deep systems at your disposal in RPG Maker MV will be the work of other users. As we speak, there are already numerous examples of other players’ work ready to be downloaded and played from the in-game Maker Forums. Simply search for a game here and you’ll be presented with efforts sorted into new arrivals, daily and monthly top fives and most highly-rated. Getting stuck into other people’s offerings is quite possibly the best and most immediate way to see just what is achievable with this software from a creative perspective, and we’ve already had some fun jumping into a few creations and seeing what other minds have come up with.

If we haven’t made it clear already then, experimentation and patience are vital with this one. RPG Maker MV is absolutely stuffed to the gills full of customisable elements. From maps, sprites, weaponry, NPCs, enemies and scenery to various battle and levelling up systems, tons of music and every other conceivable aspect of an RPG for you to tool around with and make your own creations, but you’ll need to sit down and learn in order to make the most of it all.

It’s a slow and methodical experience for sure and one that, unfortunately, is made just that little bit slower on Switch by a UI that can be quite clunky and sometimes really struggles to keep up with what you’re doing. Touchscreen controls help things somewhat here but, overall, we found that menus pause and stall quite frequently – sometimes for up to a minute – as the game processes what you’re doing and it really is a bit of a pain that a process that’s already quite slow is exacerbated by the game trying to keep up. Typing in dialogue can thankfully be sped up by plugging a keyboard into your Switch – we tried to hook a mouse up to navigate menus but as yet this isn’t supported – but you’re going to have to make peace with the fact things take time here. 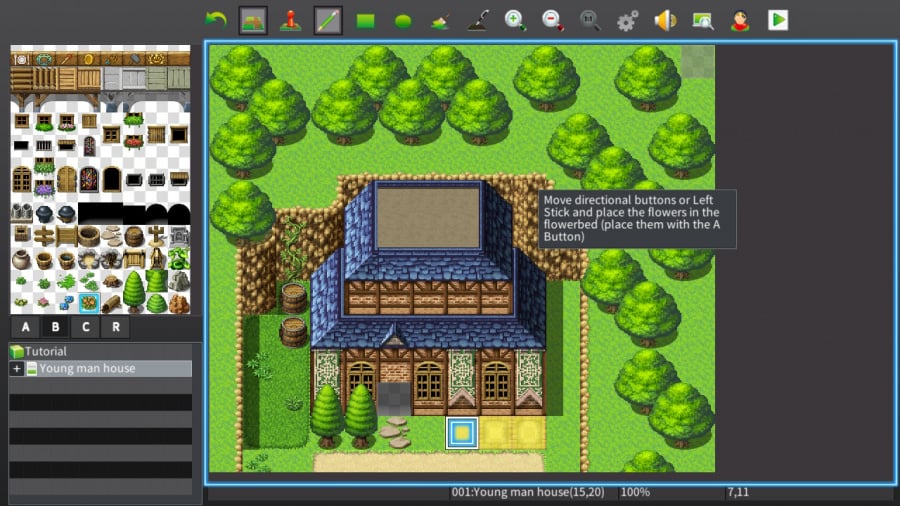 If you’re seriously considering jumping into RPG Maker MV on Switch you may also want to consider checking out the RPG Maker MV Player, a free platform releasing alongside the game, that’s available and accessible to all Switch owners, regardless of whether or not they own the main game. Here you’ll be able to play a constant stream of user content and get a really good idea of exactly what’s possible as well as perhaps some indication of the level of commitment it’ll take to create your own stuff.

RPG Maker MV is undoubtedly a deep, flexible and fun RPG creation tool on Switch. It may lack the total freedom afforded by its PC counterpart but, in comparison to the likes of Super Mario Maker 2, it still easily holds its own and provides players with a vast catalogue of RPG elements from which to form their very own epic adventures. It can be slow and clunky and, outside of making very simple games with the myriad templates provided, you’ll have to commit to doing some learning and online research to get your head around things but, overall, this is an exciting addition to the Switch line-up and we can’t wait to check out what expert users come up with in the coming weeks and months ahead.

RPG Maker MV on Switch is a stripped back and limited version of its PC counterpart that removes the ability to integrate your own custom elements as well as the use of plugins. There’s also very little in the way of help or tutorials and the UI can be clunky and slow to navigate. However, if you can make peace with these limitations, what’s here is still a vast, hugely flexible bit of game-making software that provides those with the patience to get to grips with its systems almost limitless potential for RPG-making fun. We can’t wait to see what players come up with over the coming weeks and months ahead and the free RPG Maker MV Player means that all Switch owners get to share in the fun and perhaps be inspired to join in down the line. If you’re hugely serious about RPG making you may do best to stick to the PC version, but, if you just want to have some creative fun within the limits of the assets provided here, you’ll have a blast.

Xbox Series X Review & Game Comparison With Xbox One X: Should You Upgrade Right Away?

Xbox Series X Review & Game Comparison With Xbox One X: Should You Upgrade Right Away?