These days, it’s hard to imagine that there was once a time when the ‘battle royale’ genre didn’t exist. Fortnite has proven itself to be the poster child, of course, but there are other shooter alternatives like Call of Duty: Warzone or Apex Legends. If you want something a little goofier, you can try for some crowns in Fall Guys. There’s a battle royale version of Super Mario Bros. on the way. There’s a battle royale version of Tetris. To say that the genre has become saturated is quite the understatement, then, which makes it that much more difficult for a newcomer to stand out.

Enter Spellbreak, an enjoyable new battle royale which ultimately feels like it’s releasing about two or three years too late. Fortnite’s influence on Spellbreak is visible everywhere – there’s even an ever-encroaching killer storm for goodness’ sake – but the main way in which Spellbreak notably splits from its inspiration is in the distinctly fluid form of magical combat. Instead of guns and pickaxes, your characters here fight each other by hurling fireballs and boulders at each other in the desperate struggle for glory. It’s nothing you haven’t seen before, but the fascinating mechanics explored by the different classes in Spellbreak make for matches that are thrilling, varied, and – most importantly – fun. 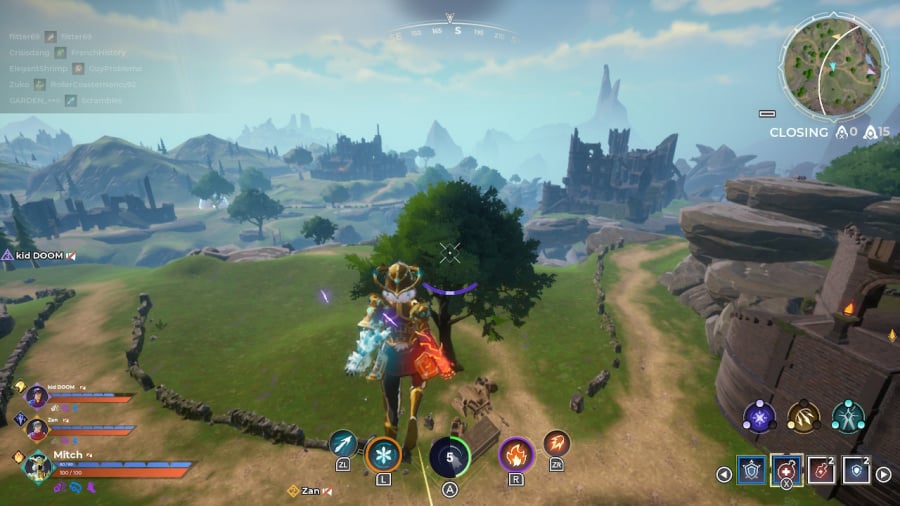 There are six classes to choose from prior to entering a match, each corresponding to a different element and playstyle. Each element has a primary attack and a secondary attack, the latter of which is governed by a cooldown and is generally used as more of a crowd control device. The ice element, for example, is basically the ‘sniper’ class, and its primary fire is a slowly charged ice spear that does tons of precision damage. The fire element, on the other hand, basically uses a rocket launcher as its primary, while its secondary is a firewall that you can place to cut off an opponent’s escape.

Admittedly, the classes don’t feel terribly well balanced – wind takes so long to kill enemies that it’s hardly worth the time – but part of what makes each match so thrilling is that you can have two elements available for use at once. The first is the one you choose prior to entering a match, while the second is decided by whatever elemental gauntlets you happen to find lying around or hidden in treasure chests. Elements can then be combined in action, making for some fascinating strategies as each match develops. The stone element, for example, has a secondary in which you fire a massive boulder at an opponent. If you have a fire gauntlet on, you can shoot the boulder before it hits the target to turn it into a meteor, causing an explosive finale when it lands. 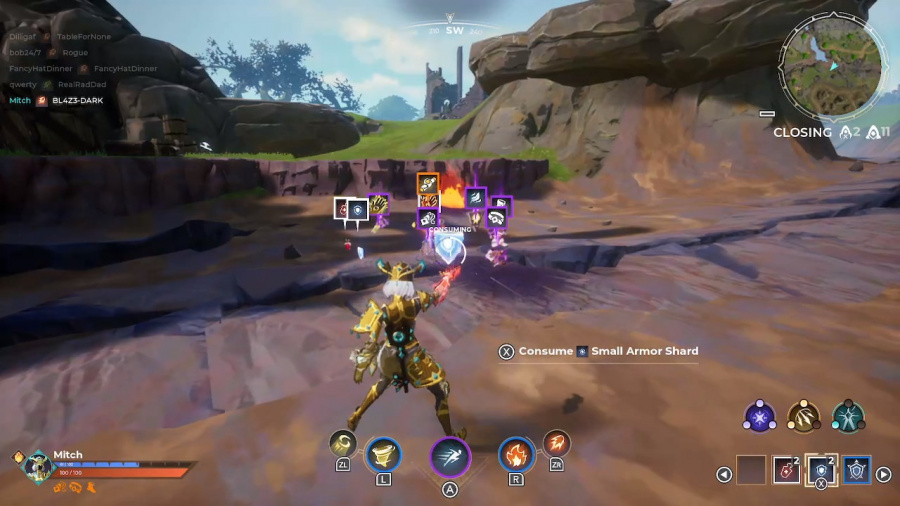 On top of this, your character can be ‘upgraded’ as you explore the map and come across new caches of loot. Equipment follows the tried and true colour-coded system to indicate rarity, which allows you to find gradually more effective gauntlets for shooting, boots for running, and belts for shields. Additionally, your character will level up every time that they cross the barrier of the current ‘safe zone’ that the storm zeros in on, and these level up will enhance the effectiveness of your spellcasting. For example, the fire element’s wall attack can harm you in the early game, but levelling up will both make you immune to its damage and grant you a temporary flight buff. All this progression combines to make for some nicely unique matches, as you never know what loot or buffs you might find in your travels, and each gauntlet you find can potentially change the way you approach conflict.

After a match, your kills and various other achievements are tallied up and converted into experience, which is then applied to level both your chosen gauntlet and your overall level. New emotes and cosmetics are unlocked for levelling both, though each gauntlet also offers a few more practical rewards for the first few levels. You can equip up to three passive buffs to your character prior to entering a match, and more of these are unlocked as you level up each gauntlet. These can offer little bumps like a slightly faster spellcasting speed, or an outline around enemies that you manage to hit, and while none of them feel massively game-breaking, they nonetheless give you something a little more tangible to chase than simple trinkets and provide some nice incentive for furthering personal progression by playing different classes. 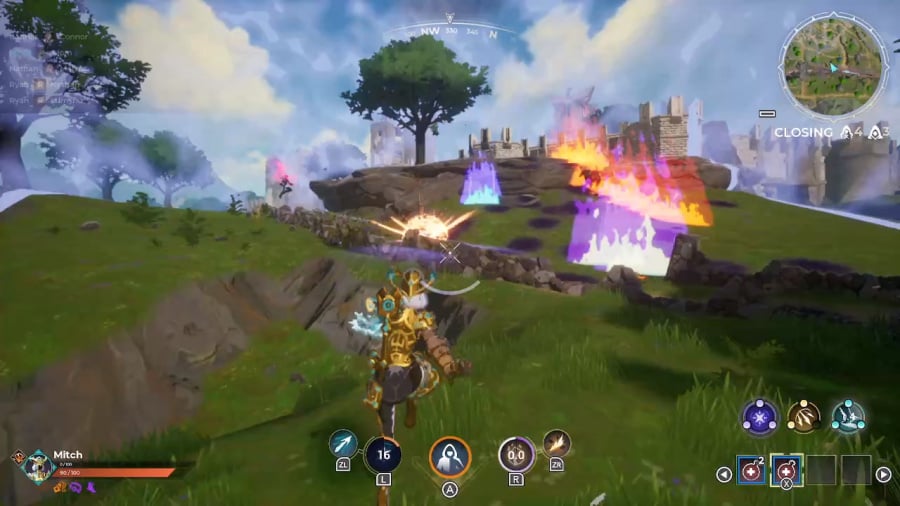 Fair play also rewards you with gold, which can then be taken into the in-game store to buy new emotes, skins, and other cosmetics. You can, of course, stump up some real-world money if you’d like access to the goodies immediately, but the distribution of gold after each match doesn’t feel stingy enough that it feels like the only way of getting to the really rare stuff. Most notably, there are no ‘pay to win’ mechanics at play here; aside from the slightly broader set of passive skills offered up to those who have played each class for an hour or two, everyone in Spellbreak is on the exact same footing from a gameplay perspective, which puts a lot more focus on player skill and familiarity with class load-outs and map terrain.

So, Spellbreak has everything that it needs to be a great battle royale. It’s got a progression system to keep you hooked in numerous ways, an interesting combat system that keeps each conflict fresh, a diverse map that never feels too small or too large, and an in-game economy that’s not too intrusive. Yet, despite featuring all this, Spellbreak never feels like it quite rises to become more than the sum of its parts. It’s an enjoyable time for many hours and it’s clear that this was made by a passionate team, but there’s a lingering sense that Spellbreak is just ‘Magic Fortnite’ and that it’s relatively unambitious execution is its most damning drawback. It doesn’t cost you anything to download it and give it a shot, of course, but don’t be surprised if Spellbreak drops off your radar after a few dozen matches. 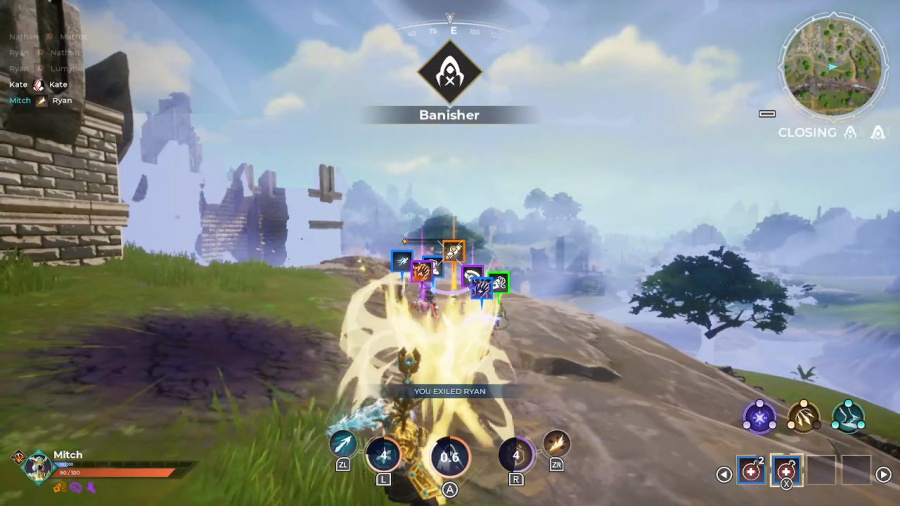 The counterpoint to that sentiment, then, is that despite its struggles with feeling uninspired, Spellbreak is simply enjoyable to play moment-to-moment. The additional verticality offered by your wizard having short form levitation capabilities introduces a fun extra dimension to conflicts, while the diversity between the various powers makes repeated playthroughs novel. After playing a match, you can’t help but have a strong urge to play one more match and see if this time you can come out on top. The fact that Spellbreak can consistently capture that desire and keep you hooked in such a fashion indicates the kind of potential it has in the battle royale space. Keep an eye on this one, as its ongoing development will no doubt lead to some memorable and notable improvements.

From a presentation perspective, Spellbreak manages to satisfy, though it doesn’t much impress. Some of the particle effects on magical orbs of light and on fireballs are nice to look at, but the map itself has a rather flat, expected appearance that lacks in ‘Wow’ moments. None of it looks bad, but we’ve seen this art style done before, and Spellbreak doesn’t bring much new to the table to iterate or riff on it. One would think that the imaginative gates opened by having mass wizard combat would lead to more interesting visuals than conflicts just taking place in another nondescript forest, desert, ruins, etc., yet such imagination is seldom on display. 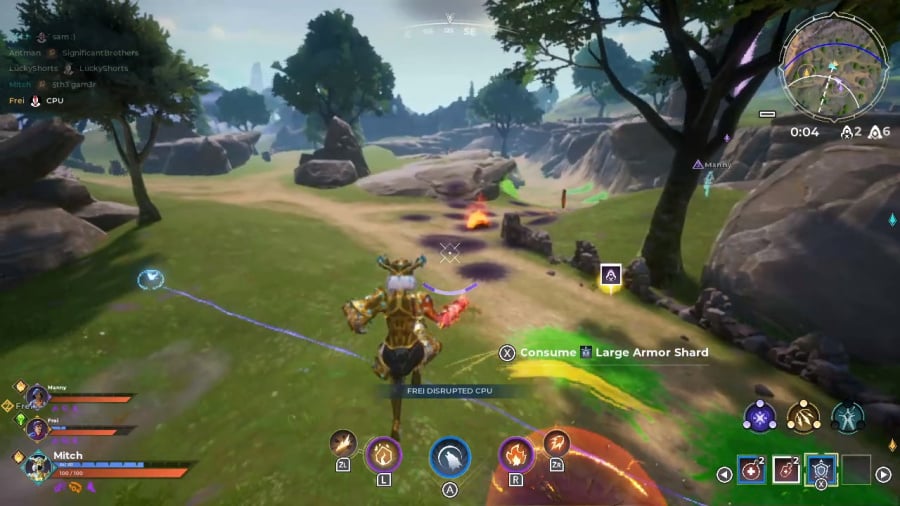 Then there are the performance issues to consider. Simply put, Spellbreak is a little rough around the edges at launch. One game saw our wizard engaged in a tight showdown with a deft opponent, when suddenly the screen turned completely black, save for the HUD. From that point on, we could only uselessly mash at buttons while we listened to the sound of the enemy wizard tearing our defenceless character to pieces. That was one of the weirder gaffs, but we had many more where Spellbreak straight up crashed without any warning and kicked us back out to the Switch home screen. These issues were rare, true, but they were also consistent enough that it’s more of a question of when they’ll happen to you, not if.

Spellbreak is up against some pretty tough competition in the ongoing battle for your time and attention, but it’s an enjoyable romp that ultimately holds its own. The magic-based combat system proves to feel distinct and interesting next to other genre peers, and you’ll likely find yourself eagerly playing matches long into the night once you get a handle on things. That being said, there’s an undeniably strong sense of ‘vanilla’ to Spellbreak that threatens to kill it in its cradle, and that’s not even considering the performance problems. Either way, it only costs you some space on your SD card to see what this one’s all about, so there’s really not much excuse to pass on it. We’d encourage you to give it a download and try it out; this isn’t the game to convert you if you don’t like battle royales, but it’s a respectable example of the genre in action.