Supermarket Sweep review: ABC’s revival of the game show is 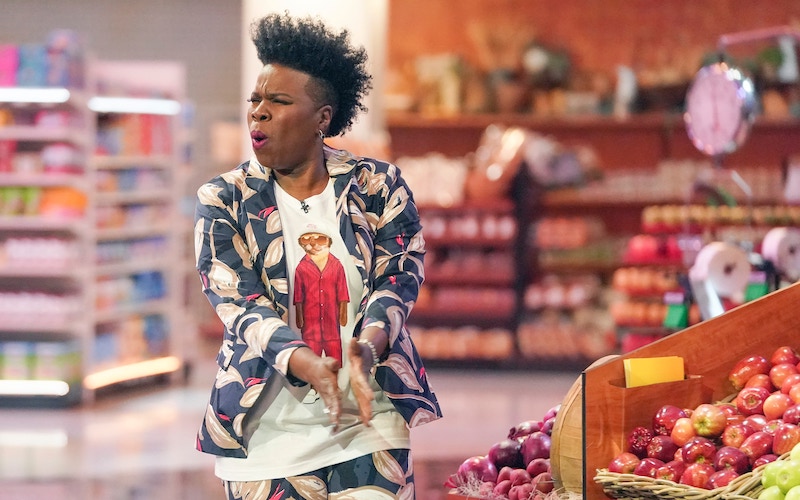 In the opening moments of ABC’s revival of Supermarket Sweep, host and executive producer Leslie Jones tells the contestants, and the audience, “This was my show back in the day. I watched it every day. I loved David. I used to practice in the grocery store because I was going to be on this show. Now, I didn’t make it past the auditions—but that’s okay, ’cause now, I’m hosting the whole shebang.”

A long-time fan hosting a game show is the single best part of this revival. Leslie Jones is not trying to be 1990s and 2000s Supermarket Sweep host David Ruprecht. Instead, she hosts by leading with her enthusiasm for the format, and it’s both endearing and successful, because she just merges the two together seamlessly.

In one round of game play, when all three contestants get the right answer, she yells, “10, 10, 10 across the board!” She screams “yes, Momma!” at one contestant and asks, “What is she doing?” while another contestant just stares at products. “Get it together, girl!”

As a pair of contestants run through the aisles in their matching but now couture sweatshirts, she watches from a booth, grimacing and gripping the mic in front of her as the seconds tick away.

You can see how badly she wants them to succeed. And for Leslie Jones’ sake, I want this show to succeed to, because how much she loves this show is palpable.

Alas, it’s not hitting the nostalgia button in quite the same way as its predecessors. It’s nowhere near as lifeless as NBC’s The Weakest Link, but it’s made some odd choices that blunt its effectiveness as a freewheeling trip through the aisles of a pretend grocery store.

Having a zany game show set in a grocery store at this moment in history makes it less of an escape than watching reruns of the 1990s version on Netflix. That actually took place in a different time, where as ABC’s version tries to ignore what’s taking place.

The Super Sweep and other changes Supermarket Sweep made

Like Match Game, an hour of Supermarket Sweep is two separate episodes, a smart choice rather than trying to stretch it into one episode. The format remains relatively similar to the 1990s version, while the production design has been modernized, from the sweatshirts to Salt ‘N’ Pepa’s “Push It” replacing the original theme song.

Prices also seem to have gone up, though I really want to see the receipts: even with bonuses and $300 in roses, one team gets $2,909 worth of groceries.

Contestants’ correct answers to questions, which are usually about brand, earn time for the Big Sweep. That’s the part where everyone runs around the store and throws expensive items (no more than five of each!) into their carts.

The majority of Supermarket Sweep’s entertainment comes from watching contestants’ strategy run up against the layout of the store and the clock’s limited time. “These bitches is heavy,” Jaleah says as she struggles to heave frozen turkeys into her cart, which she then has to maneuver to the front of the store. Meanwhile, another contestant meanders through the aisles and stares at products without putting anything into her basket. (“Get it together, girl!”)

The winning team goes on to the Super Sweep. There, a clue leads them to a product, which has a clue for another product. Find three, and they win $25,000.

But wait: ABC’s Supermarket Sweep has decided that is not enough. The teams have the option of cashing out, or to go for $50,000. They also get 20 seconds added to their remaining clock time. This is never really explained, it just happens. If they risk their money and find the next product, they’ve won $50,000.

But wait: there’s still more. They have the option of cashing out or risking everything to go for $100,000, with another 15 seconds added to their time.

I appreciate the desire to make the round even more exciting or challenging, but this isn’t a complication, it’s a momentum-killer. It’s like being on a roller coaster that accelerates from zero to 60 in a few seconds, and then comes to a complete stop, only to accelerate again a few seconds later.

The original had bells and whistles when a team found the final item; ABC’s version has literal silence as they decide what to do next.

Maybe if the winning team was just given two minutes to gather all five items, and the clock kept running while they decided whether or not to go for the next item or not, it’d work better, but this structure just deflates the ending like one of those inflatable bonuses being stabbed by the thorns on a rose from the floral section.

That’s another odd choice. There’s a florist, “Richard,” who fetches $300 worth of roses for the teams during the Big Sweep. But his instruction seems to have been to do that very slowly, to cost the team some time in exchange for that $300 item. This set-up leads to a moment of humor that provided the premiere’s title (“Give Me The Roses, Richard!”), but it’s another example of blunting the momentum of a Sweep.

The classic version had time-consuming ways to make offered teams a premium in exchange for time: standing and grinding fresh coffee, for example. But having a crew member delay the contestant’s progress is considerably different than giving someone a task that takes time.

While the game isn’t as lively, the grocery store set is much more dynamic. It’s not a real grocery store, of course: It was built inside the Barker Hanger at Santa Monica Municipal Airport, which has been the venue for awards shows and other productions.

Supermarket Sweep’s market is super-modern, dramatically and beautifully bathed in bright colors that change throughout the episode, and is an even more fantastical version of a store, with its empty aisles and fully stocked shelves.

It also looks incredibly small, compared to the TV grocery store I’m used to seeing on Guy’s Grocery Games, but also to the 1990s syndicated version. There are just four aisles, not including produce and the bakery, and those aisles are divided into thirds—except one aisle has just two sections. It’s like a large 7-Eleven.

The time is short enough and the contestants are confused enough that the actual size probably doesn’t matter from a game play perspective. And the store doesn’t need to be well-stocked, since the items aren’t actually being used for anything, just returned to the shelves for the next episode.

What also makes the space feel smaller is the lack of a studio audience. Watch a rerun on Netflix and you’ll see a considerable crowd, from which the three pairs of contestants are summoned to play. But this version has a fake audience.

Supermarket Sweep wants to be both escape and exaltation

There’s no audience on the new Supermarket Sweep, which is obvious when the camera shows the checkout lines.

Instead, we have the sounds of an audience that have become so prevalent this year. Thankfully, the fake cheers and clapping are used sparingly—light laughter following Leslie Jones’ jokes, polite applause after announcing something—yet that also calls attention to how conspicuously phony they are.

At the start of the Super Sweep, the first team takes off to applause, which immediately fades away to nothing, leaving only music and Jones’ commentary.

The lack of an audience is, of course, understandable and smart, though some of the show’s other safety protocols had me baffled. Contestants podiums are six feet apart, and Leslie Jones stands far away. But those choices are rendered useless when the contestants climb all over each other during the Mini-Sweep, fighting for the exact same item, or at the end of the episode when Leslie Jones stands immediately next to the contestants in an aisle.

No one is masked; the show has done its best to conceal what we are all living through, and I understand that choice. At the same time, grocery stores have literally been a central part of our lives this year, and the show does acknowledge that: Leslie Jones highlights an “Essential Worker” from a grocery store, a person who gets briefly profiled, $2,000, a sweatshirt, and time to wave at the camera.

During a virtual press conference last month, I asked Leslie Jones about that. The “frontline workers that you talked about—they are struggling so much with people acting like assholes already in grocery stores and not wearing their masks,” I said. “I just wonder if [Supermarket Sweep] gives people permission to be, like, Oh, yeah.  Life is back to normal. We can go back to grocery stores and run around and throw things in our carts like we used to.”

“It’s supposed to be an escape,” Leslie Jones told me. “But I’m going to say right here, yeah, you’re supposed to have on your damn mask.”

“This is just a television show, and if we need to—are you telling me that we need to, maybe in the beginning or the end, go Hey, you guys, all of these people were tested, and they wore their masks off the screen? Do we need to do that? Because I don’t think people are as stupid as you think that they are. But I do get what you are saying, and that’s not the message that we are giving.”

I do wish they’d do that, perhaps with PSAs leading in and out of commercials. The Bachelorette did a great job of acknowledging what its cast had to do in order to become the pawns of producers.

And, sadly, I do think people are that stupid; I have a very clear recollection of the ABC viewers who thought a reality show actually murdered its contestants. I’ve also spent too much time on social media seeing examples of people who act and behave in stupid ways in grocery stores.

Supermarket Sweep doesn’t need to be set in the real world. It’s a game show, after all. But it’s also impossible to be swept into the past by this version which turns this place we’ve all become even more reliant upon into a silly playground. If it’s going to take the step of acknowledging actual grocery store workers, it could easily do more to actually help them out. And if it wants to just provide an escape, it could do more to keep the contestants moving through this fantasy world.