Aliens: InfestationCall off the hunt, the trolls have been located. Somehow they have infiltrated WayFoward, usually purveyors of fine digital entertainment, and forced them to create this, the drabbest platformer in recent memory. Worse, it is cynically wrapped in the skin of a TV show that is, by all accounts, legitimately wonderful (this writer is a bit too old for it, and only watches shows about sad detectives in Norway). Trading on the goodwill of good TV to hawk budget run-and-jumpery is not new, but boy, is it depressing to see it from this particular studio.

Trollhunters: Defenders of Arcadia really does the bare minimum to pass as a platformer. You can jump and run side-to-side. There are holes in the floor and platforms that move. Enemies dash at you and you hammer a button to trap them in a hit animation and pummel them into currency. Occasionally it gets really spicy and you crouch and slide through a pipe. You’ll need that one when you hit the sewers in level two. Yes, this is a game where the second level is set in a sewer. Tells you all you need to know, really. 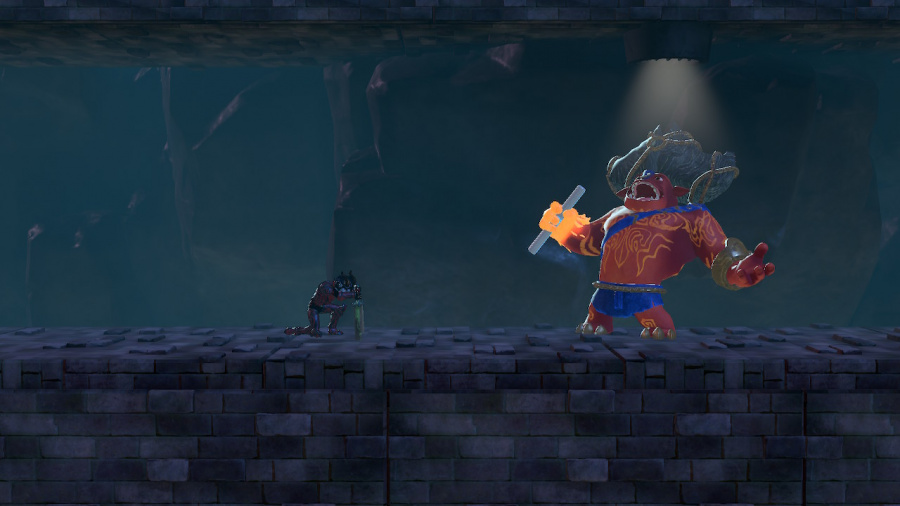 Even though our hero, Jim, is a rigid platforming presence, he’s perfectly able to tackle the obstacles as there’s so little imagination applied to them. If you can beat Super Mario Bros. World 1-1 you can beat Trollhunters with ease. This isn’t to equate difficulty with quality; there are plenty of child-friendly platformers that deliver magic. Think of Kirby’s magnificent run on 3DS. Oh no, now we’re thinking of Kirby’s magnificent run on 3DS and sobbing because we could have been replaying that instead of this.

Trollhunters’ single nod to novelty is a gang of assisting characters who provide ‘solutions’ to ‘puzzles’. Think: boxes you destroy with a hammer, or gaps you cross on a hoverboard. Each moment is clearly signposted and rarely are they used to uncover secrets – most collectables are clearly found on the linear path. We particularly love that after three of these powers the game eventually gives up and lets you refill your health with a button press. It’s rare to see a designer shrug and go back back to bed in real-time, but there it is.

The defence of tie-ins usually comes in the form of ‘well, fans will dig it’. And on the surface, there’s a spark of an idea to support that, as a time-travelling story allows Jim to teleport back to the show’s past. Tie-ins rarely move shows forwards; retelling the juicy stuff could be a neat solution. But when that tale is delivered as droning VO over vanilla platforming, there’s no sense of reliving events. Boss fights bring in more iconic characters, sure, but if you can jump over a slow-moving projectile these are done as quickly as they arrive. 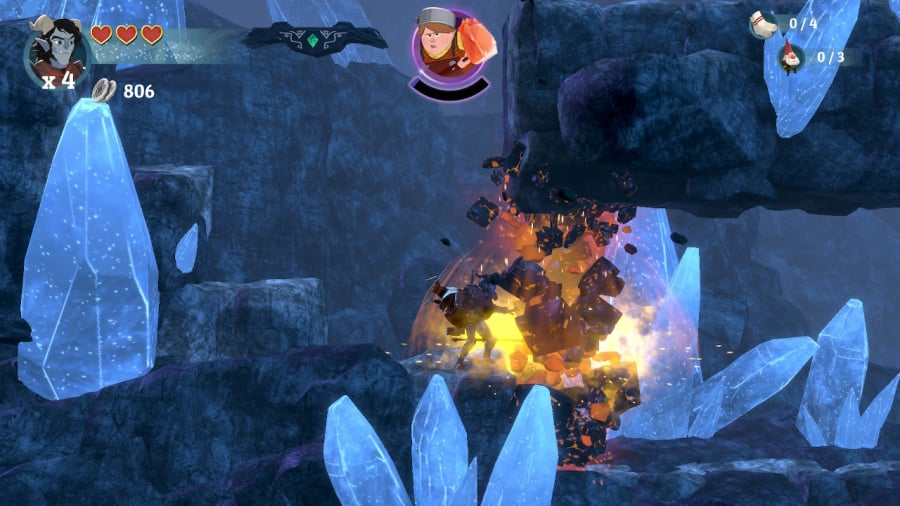 Visually, it looks like a pre-vis version of the main show – y’know, the animated storyboards that take recognisable characters but present them janky and unfinished. Character models look true to the show, but have a strange lighting effect that makes them look disconnected from the world, which in turn draws your attention to how ugly that world is. It’s rare that you notice art tiles, the building blocks of 2D worlds, but the way they float on top of crude 3D models of the show’s locations looks thoroughly unpleasant.

And given how barren it all looks, it’s staggering that Trollhunters still suffers frame rate issues and long loading times, both docked and undocked. What exactly is the game loading in those 20-second breaks? It barely has graphics. It’s enough to put you off visiting the central hub entirely, where every shop comes with another loading screen. And for what? The ability to buy health potions you’ll never need? Or play minigames that make the worst Mario Party game look like Super Mario Galaxy? This is staggeringly inept.

Really, all that can be said for Trollhunters is that it’s not technically broken. We got through this £35 game in four hours without any major incidents. Well, aside from the damage it did our human soul to see the barrel so aggressively scraped in this, the 35th year of our lord Mario’s existence. Man, the audacity of releasing something like this in the same month as Super Mario 3D All-Stars. It’s like attending the glitziest birthday bash of the century and using the din of the party to surreptitiously relieve yourself behind the punch bowl. Awful.

It didn’t have to be this way. WayForward has worked minor miracles with licensed fare before – see Aliens: Infestation and The Mummy Demastered. But this is work for hire of the most rotten kind, showing total contempt for the fans it hopes to lure in with a bright, likeable licence. Trollhunters is one of the less enjoyable things to happen to us this year. Given what a year it’s been, that is quite a feat.

No Man’s Sky: The Next Generation

No Man’s Sky: The Next Generation