Wasteland 3 is one of those games that you can get completely lost in. Between its world building, its characters, and its player progression, it’s an engrossing experience from start to finish. It goes without saying, but the veteran developers over at inXile really know how to make a role-playing game.

Wasteland 3 is what you’d call a CRPG, but it’s streamlined to a point where it’s immediately more accessible than many of its peers. That’s not to say Wasteland 3 lacks depth — far from it — rather that it does a great job of cutting down on unnecessary mechanics. For example, your whole squad shares a single inventory, while skill checks in conversations take your party’s attributes into account, not just your own. Mashing all of these smaller design decisions together results in a CRPG that’s more approachable than the likes of Divinity: Original Sin II, or Pillars of Eternity.

The game throws you straight into the action, too. You play as a Ranger — a kind of post-apocalyptic sheriff — travelling from Arizona to the wintry wilds of Colorado. Naturally, your convoy is attacked on the way, and as one of the only survivors, it’s your duty to establish a working relationship with the local warlord. The first few hours unfold quite quickly — particularly for a CRPG — and it’s not long before you’ve got your own base of operations. 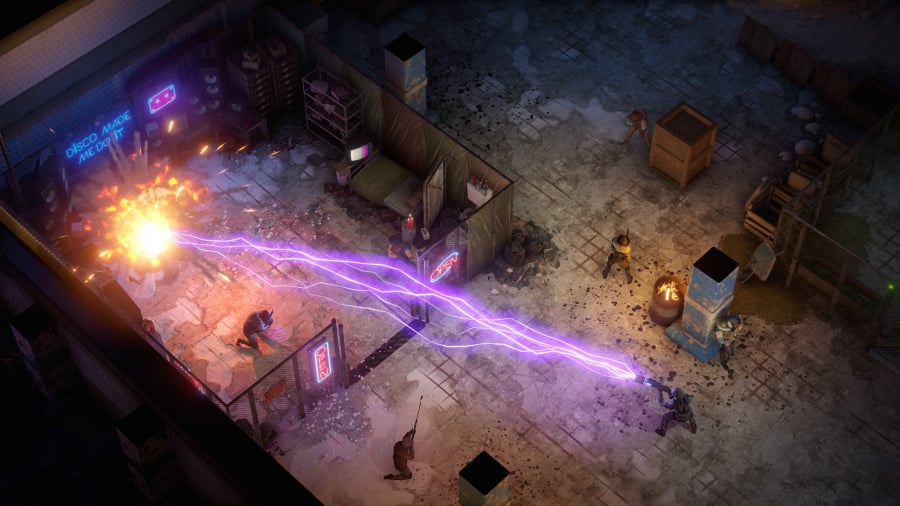 Your new Ranger HQ becomes the driving force for your actions early on. You’ll need to fill it with fresh recruits and people who know what they’re doing. This initial line of quests gets you up to speed with how the game works, as you explore nearby settlements, make key choices, and gun down all manner of mutated monstrosities. It’s a great tone-setter for the rest of this huge RPG.

As mentioned, the world building in Wasteland 3 is fantastic. And while this is a sequel to Wasteland 2 — previous events and recurring characters are mentioned every now and then — it’s perfectly possible to enjoy Wasteland 3 with no prior knowledge of the series. It’s to the game’s great credit that you’re able to discern the feel and history of a location from simply conversing with a couple of shopkeepers — and the truly impressive part is that it never feels like you’re being bombarded with exposition.

Indeed, the writing in Wasteland 3 is top notch. It’s engaging but consistently succinct. Monologues never drag, and you’re always given a range of dialogue options to choose from. And as you’d expect, player choice plays a crucial role here. One of the game’s greatest strengths is that your decisions carry weight. Sure, there are some superfluous conversations to be had as you attempt to define your character’s personality, but during quests, you’re often forced to make tough calls. 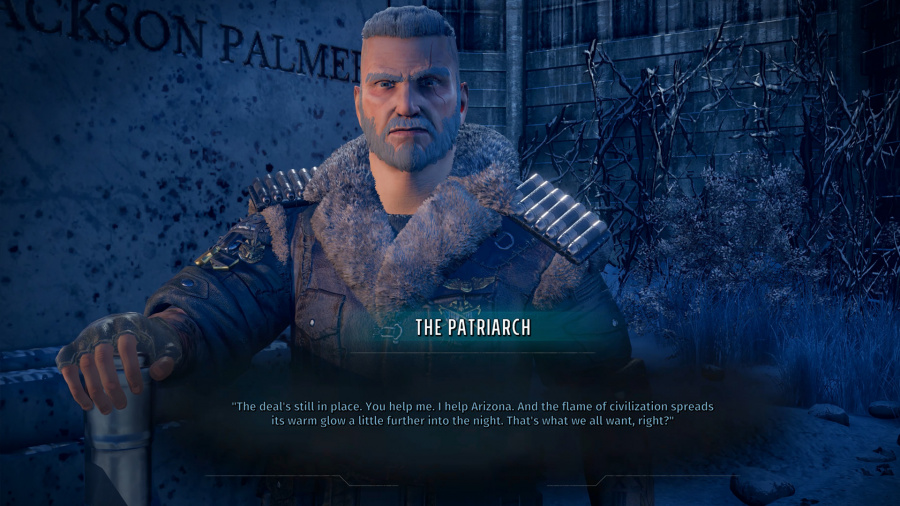 These calls are made all the tougher when you realise that Wasteland 3 doesn’t mess around. It’s impossible to see and do everything in just one playthrough because your actions can have dire consequences. Do you go save the hostages that you heard about through an anonymous radio call, or do you defend a caravan full of high grade weaponry? You’ve only got time to tackle one of these jobs, and when you hear about how brutally those hostages were killed, or how all those guns are now in the hands of your enemies, you find yourself questioning what it means to be a Ranger.

But don’t worry, Wasteland 3 isn’t all doom and gloom. Much like Fallout, the game’s stuffed with dark humour. Even if it’s just a murderous bandit making scared farting sounds as you close in on his position, Wasteland 3 will make you crack a smile at some point. It may force you into making morally reprehensible decisions every now and then, but the game definitely knows how to have fun. Case in point: there’s a cult that worships former US president Ronald Reagan, and you can probably imagine how your interactions with that particular faction pan out.

Speaking of factions, there are times when you’ll have to choose sides in Wasteland 3, and these moments have lasting effects on the world and how you interact with it. You’re free to carve out a path for the newly formed Colorado Rangers, and seeing how it all unfolds is what makes Wasteland 3 so captivating. 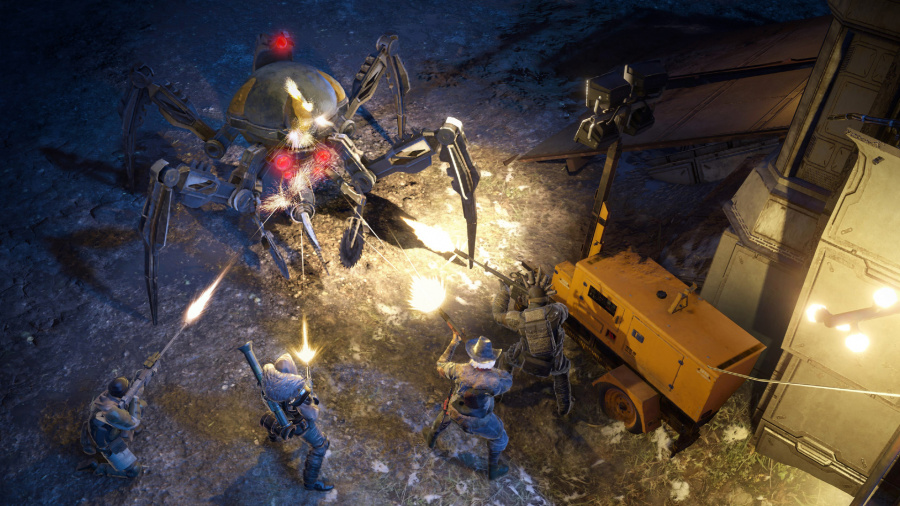 Of course, diplomacy isn’t always an option. You can be the most charming, persuasive Ranger in existence, but bullets are the only language that rabid cannibals will understand. Combat in Wasteland 3 is comparable to XCOM’s tactical shootouts; fights are turn based and take place on a grid. You can take cover, fire off abilities, and curse at your characters when they somehow miss a shot that promised 95 per cent accuracy.

Battles are strategic but punchy. Enemies boast over-the-top death animations, and blowing them to bits with a well placed grenade or rocket is always satisfying. There is a lot of nuance to combat if you go looking for it — especially when you start unlocking specialised abilities for each member of your squad — but it’s generally quite a straightforward system. It’s also worth mentioning that Wasteland 3 offers up a range of difficulty options — the easiest of which allows you to muscle through most fights.

Our only complaint with combat is that it’s sometimes difficult to keep track of everything. Your screen can become a real mess of mutated limbs once you’ve got a full eight-man squad, and although the game’s biggest battles often boast the greatest level of tactical depth, actually coordinating your team can take some serious squinting. 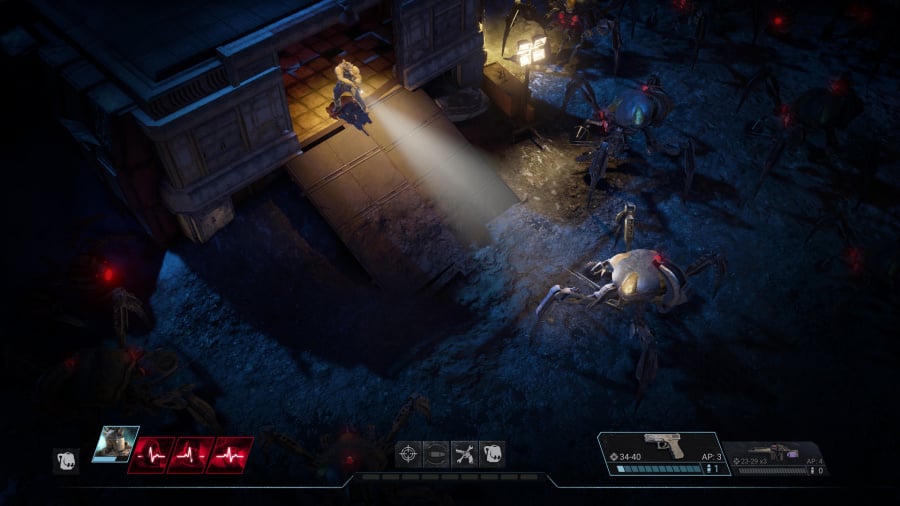 All in all, though, combat in Wasteland 3 is a blast. Scraping a victory by the skin of your teeth with a last ditch, low accuracy attack feels amazing. And growing your squad bit by bit, investing in different stats, skills, and perks, is a really rewarding process.

But for everything that Wasteland 3 gets right, it’s a shame that the game feels so janky on PS4. The jank doesn’t outright ruin the experience, but you’re always on the lookout for bugs and other minor annoyances. We also ran into a few crashes during our time with the game, but a number of post-launch patches seem to have made things more stable. Between Wasteland and Fallout, we’re beginning to wonder whether general bugginess is just a post-apocalyptic trope.

Oh, and in case you didn’t know, Wasteland 3 features online co-op for two players, each of you assuming the role of a custom Ranger. The lack of local co-op is a bit of a bummer, but setting up an online session is easy enough. Unfortunately, the bugs really start to ramp up when you’re playing alongside a friend, to the point where we wonder whether co-op was pretty much an afterthought. Broken dialogue, frame rate issues, and various connection problems plague the online portion of this release, but really, we imagine that most players won’t want to share such an in-depth adventure to begin with.

Wasteland 3 is a fantastic post-apocalyptic RPG. Great writing, satisfying, tactical combat, and a world full of memorable characters and meaningful player choice make this a no-brainer for fans of the genre. If you can look past the bugs, there’s so much to love about this deliciously dark humoured excursion.

Naughty Dog reveals The Last of Us board game, free PS4 theme, and more

Metal Gear Solid and its sequel have returned to PC

‘Hades’ is a storytelling masterclass with ample lessons for other games

Naughty Dog reveals The Last of Us board game, free PS4 theme, and more

Metal Gear Solid and its sequel have returned to PC

‘Hades’ is a storytelling masterclass with ample lessons for other games